Merkel's G20 in Hamburg proves an exercise in excess

The G20 summit is over, but the ramifications of the scenes on the streets are likely to reverberate for some time to come. Rob Mudge gives his take on an extraordinary experience. 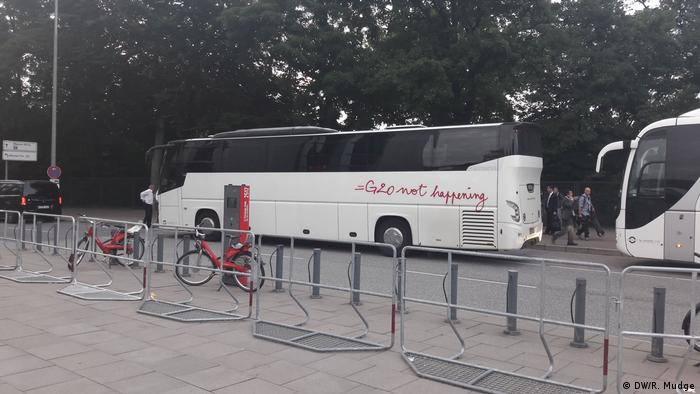 Wow! After two days of mayhem and madness, the G20 summit has drawn to a close. Some of the figures were mind-boggling: estimated costs between 130 and 180 million euros ($150-205 million), more than 20,000 police deployed on the streets, almost 5,000 journalists and 15 tons of food dished out at the press center.

The impressions that were indelibly burned into my mind (no pun intended) are those of burning cars, smashed shop windows, the acrid smoke from tear gas canisters that wafted over from the Schanzenviertel protests Friday night as I was sitting in the hotel's beer garden, the incessant buzzing of helicopters overhead, the flashing blue lights and blaring sirens of convoy after convoy of police cars and water cannon vehicles. 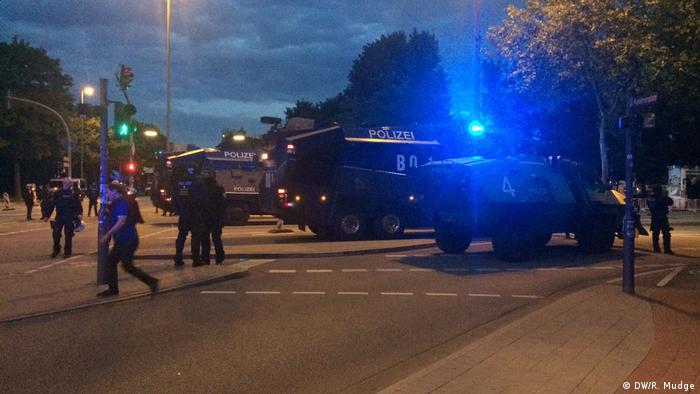 The scene just across from my hotel: I don't suppose they got much sleep - neither did I

Read more: Violence and the G20

Of course questions will be asked about why Chancellor Angela Merkel chose Hamburg - traditionally a hotbed of left-wing extremism - to host G20 leaders. Her argument was that Hamburg is the gateway to the world and therefore the ideal setting to present international flair and German efficiency.

Well, try telling that to the residents in those areas hit hardest. "We're scared" and "Why do they have to destroy our city?" were ubiquitous comments that I heard. And, having spent last night watching videos on my mobile phone of balaclava-clad protesters smashing car windows and throwing incendiary devices inside, I can wholeheartedly understand their anger. One such incident caught my eye in particular. A protester approached a nondescript car parked on a side street and proceeded to vandalize it. It was a random, wanton act of violence - and clearly not an attack on a BMW or Mercedes or Porsche (which I'm not condoning) - those symbols of capitalism so despised by many in the left-wing scene.

I've covered G8 summits (remember those?) in the past, and the one that left me feeling uneasy was the gathering in Savannah, Georgia, in 2004. It resembled a ghost town, with boarded-up shop windows and heavily armed US military and police patrolling the streets. There were protests but on a smaller scale and far removed from any potential hot spots.

So, acknowledging that Hamburg would present an entirely different ballgame, I thought I knew what to expect - how wrong I was! Years of working in a news-driven environment have made me pretty cynical, a useful tool in self-preservation. But the events here in Hamburg, an open, liberal-minded city have left me, to use a cliche, shell-shocked.

I wonder how long it will take for the city and, more importantly, its residents to recover. What impact will the G20's unwanted and unwarranted byproducts have on its image - not only nationally but abroad?

The stoic and unperturbed demeanor of an employee at my hotel gives me faith that Hamburg will move on. When I arrived on Thursday, Antonio told me that Hamburg had seen worse in the past and would weather this storm, too.

"Welcome to hell?" No, welcome to Hamburg's indefatigable spirit and optimism.