Violence and the G20

As images of mass protests and burning cars overshadow the G20 summit, police in Hamburg have clamped down. That is a necessary move, DW's Henrik Böhme writes. 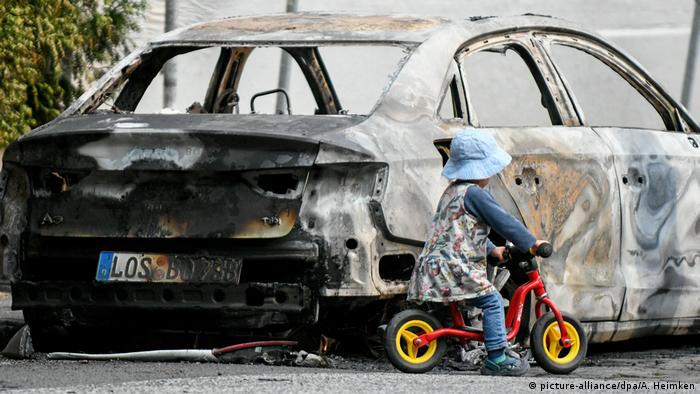 Hamburg in July, a lovely city in the north. It's usually worth the trip, but not just at the moment. For in many ways the city isn't itself right now. Its splendor has disappeared - behind black smoke, behind water sprayed from cannons, behind massive groups of protesters dressed in black, behind police clad in riot gear. Behind barbed wire, police barriers and roadblocks. Chaos on the street and the railway. Burning vehicles, not just luxury automobiles but also family cars. The distinction doesn't matter: All that matters is that it's burning.

There follow the usual childish questions: Who started it? Who's to blame? The police, who "disproportionately" responded, and possibly even provoked? Or the demonstrators? Many of them are peaceful, but not all. There's that small group of people who hide behind the others: For different reasons, they're opposed to this summit, to the system it represents, to the injustice in the world, to whatever else. That's democracy; you can object to it, and you're allowed to show it, too.

Of course, Hamburg is known for its nonconformists. Hamburg is also renowned as a city whose different groups can't stand each other, pitting the wealthy Blankenese district against the more working class areas, such as St. Pauli and the Schanzen quarter. But, usually at least, these people do leave each other in peace.

So, it was completely foreseeable that if a clash were to break out, it would be the event of the year for those involved in the city's anti-establishment scene. Especially if it doesn't cost anything to make the journey, since the enemy - in this case the G20 summit - is coming right to their hometown. The fact that protesting can also be colorful, loud and creative was apparent in the lead-up to the summit.

But that's seemingly not enough for some of the protesters: For them, everything must burn, everything must be torn down. It would be a shame if the police deployed without good reason. Even water cannons need the occasional refill.

And it's stupid when these people smash windows even in the Schanzenviertel itself, just because stores are selling name brands in addition to ecofriendly knitwear. That's when families who live in these neighborhoods, and want nothing to do with the violence, are directly impacted by it.

Demonstrations are important, freedom of expression is a great asset - and so this summit's environment is just a taste of democracy for the world leaders taking part, even if they don't seem to quite acknowledge that. But all of the questions that the peaceful demonstrators are trying to raise about globalization in general and the summit in particular - all of that is overshadowed by the smoke and the chaos. The state is duty bound to act against this violence. Anybody who shoots a flare in the direction of a police helicopter must be punished. There is no alternative, it's a matter of law and justice.

And, if some aspect of the police response was disproportionate, then you can bring the matter to court and it can be cleared up there. That's how the rule of law works.

When the clouds of smoke have dissipated, when Hamburg once again reveals its beautiful side, then once again the alternative quarters of the city will go on living - and frequenting their American burger joints and Swedish furniture stores. Life must go on.