With trade conflicts brewing around the world, this weekend’s G20 meeting of finance ministers in Argentina might not be the most fun place to be on the planet. Yet critical questions will be on the agenda. 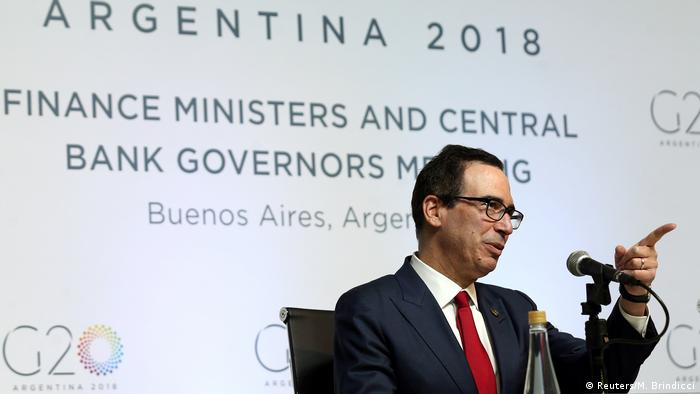 G20 finance ministers meet this weekend in Buenos Aires in their first meeting since global trade tensions moved beyond rhetoric into a volley of tariffs and counter-tariffs.

Trade will dominate the agenda in the Argentine capital, with much attention likely to be focused on US Treasury Secretary Steven Mnuchin as he looks to "respond to concerns on US trade policies" at the gathering of finance ministers and central bankers from the world's 20 leading economies.

The EU, China and Canada will be among those represented, with all of those having come into direct conflict with the trade polices of US President Donald Trump in recent weeks and months.

Read more: US firms try to protect themselves amid Trump trade battles

The US and China have placed $34 billion (€29 billion) worth of tariffs and counter-tariffs on each other, with more expected to follow, with the US also placing tariffs on steel and aluminum from the EU, Canada and Mexico, resulting in further counter-tariffs from those trade partners.

With tensions escalating markedly in recent weeks, both from the continuing rounds of tariffs and from some of the rhetoric concerned — such as President Trump describing the EU as "a foe" — the hopes for any kind of tangible progress emanating from the meeting are low.

In the group's first meeting of the year back in March, little of note emerged other than a joint statement agreeing that "economic and geopolitical tensions" threatened global growth.

Talk has given way to tariffs in the intervening period, and on the eve of this weekend's gathering, International Monetary Fund (IMF) boss Christine Lagarde warned that the current tensions over trade present "the greatest near-term threat" to the world economy. However it should be noted that the IMF still projects global growth of 3.9 percent in 2019.

While Mnuchin and the US delegation are likely to spend the weekend trying to convince Japan, the EU and other members of the 'Group of Seven' (G7) of the need for a stronger collective stance against the trade practices of China, it is unlikely that they will find their ostensible allies to be at their most obliging.

"US trading partners are unlikely to be in a conciliatory mood," Eswar Prasad, international trade professor at Cornell University and former head of the International Monetary Fund's China Division, told Reuters.

"(US) hostile actions against long-standing trading partners and allies has weakened its economic and geopolitical influence," he said, referring to the raft of tariffs the Trump White House has driven.

While the economic heft of those represented at the gathering is not in doubt — at the close of the last G20 meeting, the financial leaders represented 75 percent of world trade and 85 percent of gross domestic product — concrete progress on the various issues appears to be out of reach, particularly with more tariffs and counter-tariffs expected in the near future.

Aside from the trade issues, the meeting will also address crises threatening a number of emerging economies, not least in host nation Argentina, which recently accepted a $50 billion IMF loan to try to stabilize its economy.

Trump on US-EU trade: "They treat the United States horribly."