As China expands its trade and network infrastructure in Europe, the EU has proposed a strategy to keep Brussels "in the driver's seat." DW talks with Mathieu Duchâtel from the European Council on Foreign Relations. 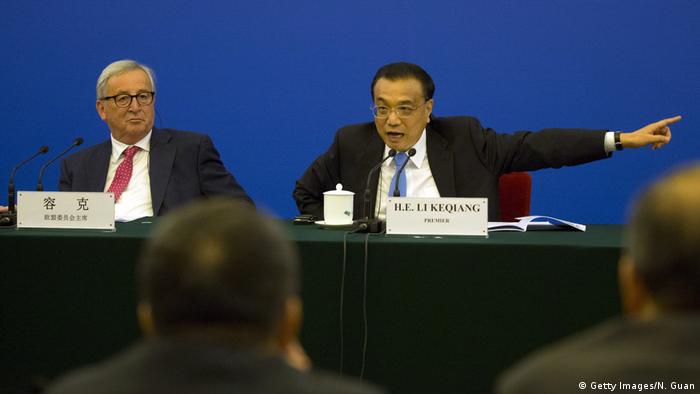 Last week, the EU announced a proposal for a "new and comprehensive strategy to better connect Europe and Asia." As European countries and industry expand infrastructure and network connections with Asia, and China in particular, the EU is seeking to level the playing field and ensure that joint projects develop with Brussels setting the standard.

DW spoke with Mathieu Duchâtel, senior policy fellow and deputy director of the Asia and China Program at the European Council on Foreign Relations, about the EU's strategy on connecting Europe and Asia.

DW: How should we understand this EU proposal? China's Belt and Road project is based on infrastructure, and this proposal is not like building a railroad or bridge but is rather based on networks.

Mathieu Duchâtel: This proposal is the EU's response mainly to China's Belt and Road initiative, with the aim of making European values on connectivity clear.

Could you explain what the EU means by connectivity?

I think it's about infrastructure. The EU likes the word networks, but without infrastructure, you don't have increased connectivity. These guidelines are going to help when European companies team up with Chinese companies in third countries.

Is this proposal a reaction to China expanding into Europe?

In the past three years since the first projects were started, Chinese diplomacy has become very much centered on Belt and Road connectivity issues. There had to be some kind of a response coordinated response by the EU. China's Belt and Road Project is a global initiative and the EU's response is centered on its principles, norms and rules to work with China on connectivity projects.

The EU foreign affairs chief, Federica Mogherini, has talked about Central Asian interest in European standards on connectivity projects. Why is there a focus from the EU on Central Asia?

I think Europe is clearly behind Russia and China in terms of influencing Central Asia. At the same time, a country like Kazakhstan is always willing to diversify its foreign policy. The EU has been thinking about this for a long time and I think it wants to portray itself as an alternative partner for infrastructure projects in Central Asia.

If the EU wants to finance infrastructure projects overseas, where is the money going to come from?

The EU has policy instruments; there is a fund for strategic investment and there is the budget of the External Action Service. Even though the plan does not include new budgetary lines to support the implementation, the EU already has a budget that can be allocated to support connectivity projects.

However, the key element for the EU is that the private sector is the most important actor. This is because of the way European economies operate, which is very different from China.

So, for example, let's say there is a new port project in Vietnam and European companies decide to get involved in building port infrastructure. You may have some EU support, but most of the funding would come from private companies.

Mathieu Duchâtel is the Senior Policy Fellow and Deputy Director of the Asia and China Program at the European Council on Foreign Relations.

This interview was conducted by Tian Miao