EU members and leaders agree on compromise for Nord Stream 2

A deal between EU member states, the EU Parliament, and its Commission aims to give the bloc more oversight on gas pipelines. However, the controversial Nord Stream 2 project would not be threatened by the regulations. 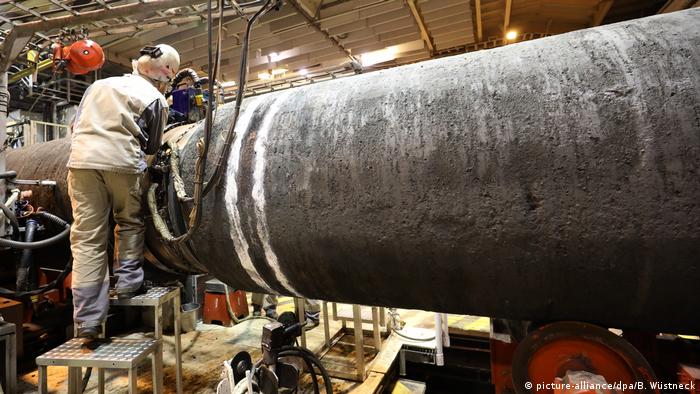 The EU parliament and its Council are set to adopt new regulations on gas pipelines connecting the bloc members with non-EU countries, the EU Commission announced early on Wednesday.

The upcoming directive is based on a compromise between EU member states and EU officials in Brussels. The bloc leaders agreed to tighten Brussels' oversight of gas delivery and expand its rules to all pipelines plugging into the EU's gas distribution network.

Read more: Nord Stream 2 gas pipeline — What is the controversy about?

For example, owners of pipelines linking EU and non-EU countries would also be required to allow access for their competitors. Brussels would also have more power regarding transparency and tariff regulations.

Brussels has repeatedly expressed concern over the controversial Nord Stream 2 project which would deliver Russian gas directly to Germany through a pipeline under the Baltic Sea. Many EU states oppose the mammoth project, and the US claims it would allow Moscow to tighten its grip on the EU's energy policy.

Berlin has insisted that the pipeline is a "purely economic" issue.

Speaking to Neue Osnabrücker Zeitung daily, Russian ambassador to Berlin, Sergey Nechayev, slammed the US' opposition as an attempt to "push its competition aside" and clear the way for American suppliers of liquefied gas.

"It's hard to believe that a country that is destroying the rules of free and fair trade, that is imposing import tariffs on its competition, that is flying slogans like 'America First' on its flags and often threatens biggest European concerns with illegal sanctions, is now really concerned about European interests," the Russian envoy said in remarks published in German on Wednesday.

Last week, France unexpectedly rebelled against the project, but Berlin and Paris soon reached a compromise. Thanks to their agreement, the latest deal is not expected to impede the ongoing construction of Nord Stream 2.

According to the EU Commission, however, exceptions are "only possible under strict procedures in which the Commission plays a decisive role."

The Gazprom-backed pipeline is set to be completed by the end of the year.

European leaders say the leaks in the Nord Stream 1 and Nord Stream 2 gas pipelines raise concerns about the security situation in the Baltic Sea region. The Kremlin, meanwhile, is denying allegations that it is behind the damage.