German Chancellor Angela Merkel has warned of a disintegration of international political structures. Speaking in Munich, she called for greater cooperation and stressed the importance of NATO. 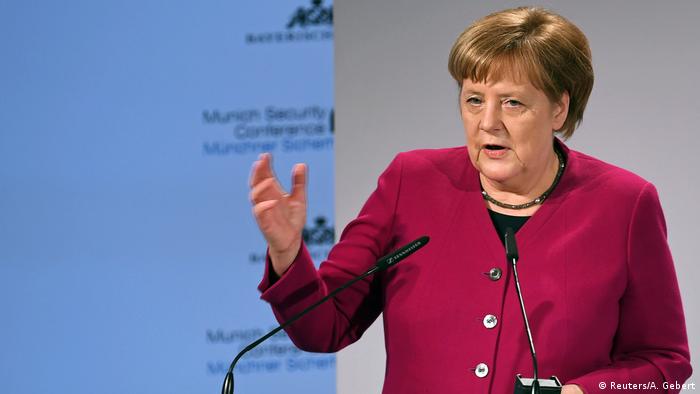 The chancellor on Saturday said international structures to maintain security were under increasing pressure to meet the demands of a changing world.

"What we see as an overall architecture underpinning our world as we know it is a bit of a puzzle now; if you like, it has collapsed into many tiny parts," Merkel told her audience at the Munich Security Conference.

"We have to think of integrated structures and interdependencies," said Merkel, who noted a deterioration in relations with Russia.

While the chancellor asserted the importance of NATO as an alliance, she stressed that a holistic approach was needed, embracing economic and political realities as well as military ones.

"We need NATO as an anchor of stability on a stormy sea. We need it as a community of shared values. We should never forget that NATO was not founded only as a military alliance but as an alliance of nations that share values, that share the same values as regards human rights, as regards democracy — guidelines that we all share."

Merkel directed several specifics in her speech at the US, questioning the wisdom of a rapid US withdrawal from Syria and Afghanistan and the notion that German car exports represented a threat to US national security. She stressed that carmaker BMW's largest plant is in the US, not in Bavaria.

Merkel received standing ovations, with lots of applause from the audience during her speech — with the notable exception of Ivanka Trump and US Vice President Mike Pence.

The three-day conference in the Bavarian capital began on Friday, with some 30 heads of state and government in attendance.  Delegates were set to discuss trans-Atlantic relations, tensions between Russia and the West and conflict in the Middle East.