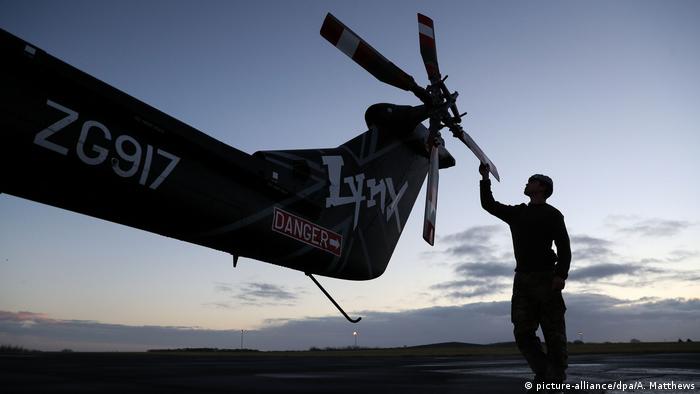 German Defense Minister Ursula von der Leyen on Friday told DW that Europe was working on ways to continue defense cooperation with the United Kingdom in the event of Brexit.

Von der Leyen was speaking after she opened the Munich Security Conference alongside British Defense Minister Gavin Williamson. During his speech, Williamson urged Germany to continue military cooperation at a European level outside of NATO and the EU.

"Whilst the UK is leaving the EU, I want to start by saying our commitment to European security remains steadfast," Williamson said. "We will continue to step out into the world protecting our friends, defending our interests, standing-up for our values."

But Williamson also appealed for closer European military integration — an unpopular idea among many supporters of Brexit — not to come at the expense of European NATO members that are not in the EU, a status that already applies to Turkey and Norway, and that looms for the UK.

'Capable to act together'

German Foreign Minister Heiko Maas said that Berlin's emphasis on "mutual cooperation" was "not out of a post-national reverie but because it corresponds to national interests and imperative requirements."

"We are committed for a strong Europe, that is capable to act together," said Maas. "Strengthening and deepening the European Union remains at the core of our national interest."

That point was driven home by Wolfgang Ischinger, veteran German diplomat and chairman of the Munich Security Conference, when he wore a hooded sweatshirt emblazoned with the EU flag for his keynote address.

"A strong Europe needs strong symbols," Ischinger said. "The European Union has to speak with one voice to represent the interests of 500 million Europeans."

However, German Economy Minister Peter Altmaier told DW that a common European approach may not be possible in all matters.

When asked about Nord Stream 2, a German-Russian gas pipeline that has raised concerns in some EU countries, Altmaier said: "The national energy mix and energy supply so far has not been under the competence of the European Union."

"The gas markets have been regulated domestically," he said. "Now we have adopted a decision by a very large majority — and Germany was in favor of that — also to regulate Nord Stream 2. That means that we will insist on certain European requirements as far as the implementation of this pipeline is concerned. But this will be done by Germany according to the common rules of the European Union."

DW also asked Altmaier about a recent Amnesty International report on German and Western weapons being used in the Saudi-led military campaign in Yemen, but the minister replied only that he was "not aware of it."

Read more: Opinion: The near miss with Nord Stream 2