UK Prime Minister May handed another defeat in Parliament

Lawmakers in Westminster have voted against the government's motion to send Prime Minister Theresa May back to the EU for final negotiations. The defeat means that May has almost no support left to negotiate in Brussels. 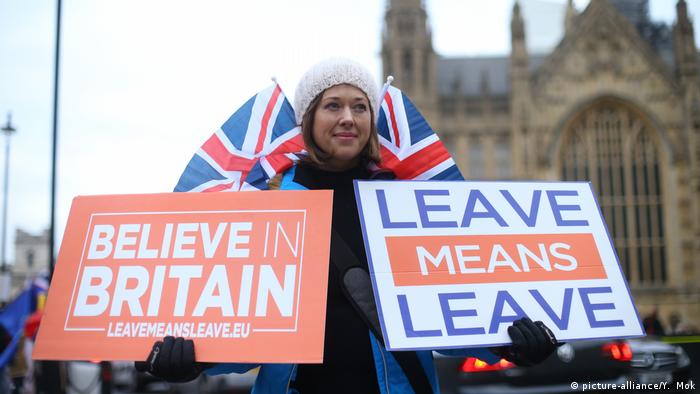 After two years of failing to get anything significant regarding Brexit through Parliament, the government of Prime Minister Theresa May launched a last desperate plea on Thursday.

Now that the motion has failed, May will have almost no credibility left to continue talks with the EU.

May lost support from both the hard-Leave and hard-Remain factions of her own party, leading to the motion's failing.

After the defeat, in a vote that May did not attend, her office pledged that her government would continue changes to the existing Withdrawal Agreement in Brussels.

"The government will continue to pursue this with the EU to ensure we leave on time on March 29," the spokesman said. He said May believed that her party still supported her bid to continue negotiating in Brussels, but that lawmakers had rejected the motion because they were concerned about taking a "no deal" Brexit off the table at this stage. May's office also argued that the opposition were in effect making no deal more likely by opposing her plans to work on the Withdrawal Agreement.

After the vote, Labour leader Jeremy Corbyn said May — who was not in the chamber — might like to come to the podium to "admit her Brexit strategy has failed."

"Tonight's vote shows there is no majority for the prime minister's course of action in Brexit," Corbyn said. "She cannot keep on just running down the clock and hoping that something will turn up that will save her day or save her face."

The SNP's Ian Blackford called the vote "a significant defeat for the government," adding: "At the end of the day, the prime minister should be here to accept her responsibilities on the back of this government defeat. Where is she?"

The Liberal Democrats' Tom Brake asked: "In what way can we as members of Parliament, who have already voted to rule out no deal, can ensure that the government listen to that and respond appropriately?"

House Speaker John Bercow responded that this "is a matter of politics, and the politics will play out — and I use that term in a nonpejorative and neutral sense — in the days and weeks ahead, and we will have to see where we get."

Soon thereafter, the session was adjourned, after Bercow had said "there is an Arsenal match on television very soon" — a reference to his and Corbyn's favorite football team in action in the Europa League against BATE Borisov.

May 'only trying to gain time'

Across the English Channel, Germany's justice minister, the half-German, half-British Katarina Barley, told DW that it seemed to her like May "is only trying to gain time and put more pressure on the other member states. And that is a strategy that will not work out."

Barley also criticized British MPs who are resisting the backstop measure to avoid a hard Irish border at all costs. "We have to protect the Good Friday Agreement," she said. "So, it's just a rescue option for Ireland and Northern Ireland ... and obviously in Britain it is being seen as something the European Union wants to oblige Britain to stay in."

Barley: No room for substantial renegotiation

The outspoken Brexit campaigner has said he will stand as a candidate for the European Parliament if Britain's departure from the EU is delayed. He called Theresa May's withdrawal agreement, "the worst deal in history." (08.02.2019)

EU negotiator Michel Barnier has suggested that British Prime Minister Theresa May consider a permanent customs union with the bloc. The arrangement was suggested by the UK opposition Labour Party in a letter to the PM. (11.02.2019)