The UK government has spent the past 2 1/2 years in a bubble that has left it paralytic and unable to tackle the domestic problems that haven't magically disappeared into the Brexit vortex. Rob Mudge reports. 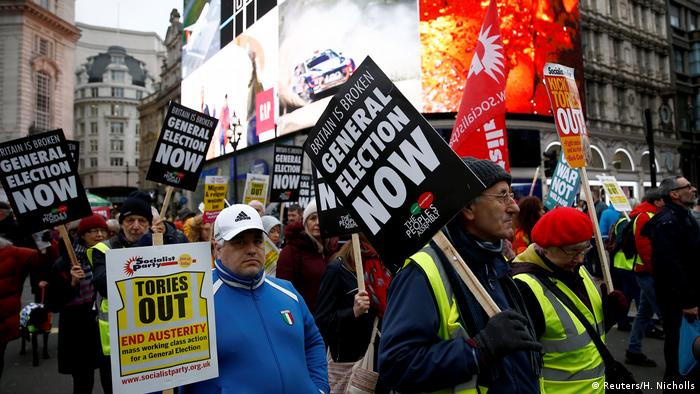 Given the government's fixation on Brexit, it's almost a surprise the country hasn't come to a standstill. But how long can the government get away with this form of escapism?

Emily Andrews, associate director at the Institute for Government in London, a think tank that explores the key challenges facing the government, says the lack of progress is and isn't because of Brexit.

"I think we've reached the point where a lot of this is now directly Brexit-related. And since the general election [in 2017] the domestic agenda has been really stymied by the fact that the Conservatives are only in a minority government and by the fact that the Cabinet is very divided. Theresa May hasn't had the authority to push forward a united vision for domestic policy."

But as Brexit reaches its potential endgame, it's not just the focus that has shifted. "In terms of civil servants, we've got loads more people being moved across to think about a no-deal [Brexit]," Andrews told DW. And those personnel gaps mean that very often other important policy issues are being dealt with in a cursory manner at best.

One of the key areas that has ended up on the back burner is social care. A so-called green paper was originally due to be published in autumn 2017. Since then it's been put off repeatedly. Regardless of Brexit, there is no ideal time to deal with such a crucial issue, said Andrews. "Politically, it's a toxic question of how to fund social care in a sustainable manner. Whereas there's been a rise in National Health Service spending, funding for social care has fallen."

Indeed, the issue caused problems for the Conservatives at the last election when the opposition accused them of proposing a "dementia tax." The Conservative Party's manifesto at the time set out plans for more pensioners to contribute to the cost of their care. The elderly would have to pay for their own care if their combined savings and property amounted to more than £100,000 (€114,000, $130,000). Under the proposal, people would be forced to sell their homes to pay. The plans were dubbed a "dementia tax" because people with dementia living at home would be forced to pay while people with cancer in hospital would not.

Since then there's been little movement. While that can be put down partly to standard political prevarication, the focus on Brexit has stalled any meaningful progress. "Now Brexit is totally in the way and I've got no idea when are we going to have this national conversation about how we fund social care, and what that means is that we're probably going to keep seeing this emergency cash being pumped in," said Andrews.

Trying to make public services efficient and cost-effective is difficult at the best of times. In 2010 the coalition government of the Conservatives and Liberal Democrats presented a plan to cut costs, spend frugally and provide public services that actually work. And for a while, this less-is-more approach paid off, albeit with a caveat. "They didn't do that by making the services cheaper to run. They held down public sector wages through a freeze and then a pay cut. And they cut staff numbers and asked existing staff to do more," said Andrews.

No progress on 'burning injustices'

And they've been looking for a good while. When Theresa May became prime minister in 2016, she stood outside 10 Downing Street and pledged to tackle the country's "burning injustices." But her track record does not reflect her holistic approach. Reductions in public health spending have made access to addiction services much harder, not to mention mental health service reductions. Homelessness has gone up, which means more and more people are forced to sleep rough.

Another major disappointment is the lack of tangible progress on one of her key promises. "One of her big things was a pledge to draw up new legislation to support survivors and victims of domestic abuse. There is now a draft bill, but it hasn't actually been introduced in Parliament. And we know of other bills that are just sitting there. There's one that's sat there for two years," said Andrews.

Inertia coupled with a lack of transparency are proving to be a major predicament for the government and the country. Getting anything other than Brexit onto the legislative timetable is proving difficult, if not impossible.

"And so actually passing any new laws is going to be difficult. And in reality, we don't know what the civil servants who have been moved on to no-deal preparations have been doing beforehand. We don't know what programs have been paused or canceled precisely in order for the people who are working on them to go and do other things. The government hasn't been transparent about it," said Andrews.