Wolfgang Ischinger: ′European Union is alive and kicking′ | World | Breaking news and perspectives from around the globe | DW | 08.02.2019

In an exclusive interview, Munich Security Conference chairman Ischinger told DW how important multilateralism is in today's world, and that the EU is an important factor when it comes to upholding that ideal. 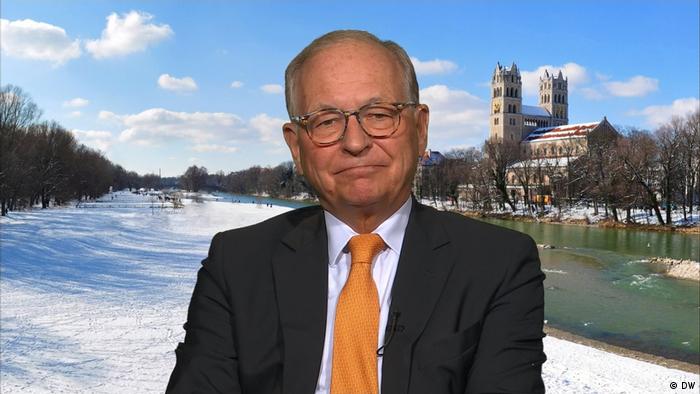 The European Union integration effort has not failed, despite Brexit and recent disagreements between Germany and France. That message will be demonstrated at the 2019 Munich Security Conference (MSC), says Wolfgang Ischinger, MSC head and a former German ambassador to the UK and the US.

"The European Union is alive and kicking," Ischinger told DW ahead of the world's most important conference on international security, which starts on Thursday.

There had been concerns about the relationship between Germany and France, two of the key EU actors, in the wake of a disagreement on the Nord Stream 2 pipeline. The contentious project would bring gas from the Russian energy giant Gazprom straight to Germany. The European Union wants to extend its internal energy market laws to offshore gas pipelines, which would mean stricter regulations that could threaten the project's completion. Germany wanted to block the new directive, while France said it would vote in favor of stricter rules, effectively opposing the pipeline.

But on Friday, the countries revealed a compromise they presented to the other EU nations. According to France and Germany's suggested changes to European gas regulations, negotiations about gas pipelines with external nations like Russia would fall to the country in which the pipeline first merged with the EU gas-supply network. In the case of Nord Stream 2, this country would be Germany.

French President Emmanuel Macron canceled a joint appearance with German Chancellor Angela Merkel at the MSC, but Ischinger said that MSC organizers had been informed of this a week ago, and that it wasn't due to the Nord Stream 2 discussion.

EU needs to demonstrate its strength

According to Ischinger, the EU is as strong as ever. The impression "that because of Brexit, the European integration project is about to crumble, is wrong," he said.

Still, across the EU, nationalist and populist parties are gaining more and more power. Parties like Germany's right-wing AfD and Marine Le Pen's National Rally in France represent an anti-EU attitude that has hit a nerve with some voters. It's crucial, Ischinger says, that the EU pushes back against those nationalist tendencies.

"We are the strongest trading and economic bloc in the world [and] we have a lot of economic and soft power," the MSC chairman said. "And that's where we should apply it: rebuilding multilateralism in a world that is fraying in the margins."

Such concerns about the world are shared by a significant number of people. A poll conducted by the Friedrich-Ebert-Stiftung Regional Office for Cooperation and Peace in Europe (ROCPE) titled "Security Radar 2019: Wake-Up call for Europe" shows that 21 percent of French, 19 percent of Germans and 15 percent of Russians believe that the international political situation will deteriorate over the next five years.

The importance of cooperation and multilateralism will be a key issue at the MSC next week, where representatives of the world's three big military powers, the US, Russia and China, will meet. Ischinger said the countries should focus on what they have in common, not on getting ahead of the others.

"It would be a major disaster for the global future if we really allow a situation between the big powers to develop that would look like classic great power rivalry," he said.

Ischinger added that one of the goals of the conference in Munich will be to "clarify what the priorities of responsible leadership need to be in 2019."

The interview with Wolfgang Ischinger was conducted by Sarah Kelly for DW TV.