Paris has signaled it will support changes to EU guidelines regulating gas imports. Germany has thus far ignored opposition to its project, but it may not be able to any longer. 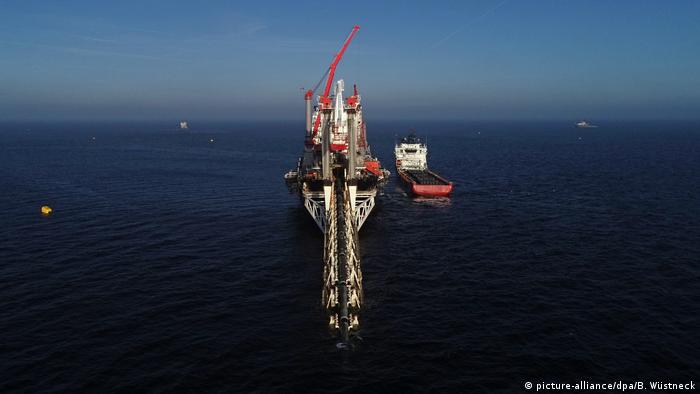 France's Foreign Ministry has signaled its intention to vote for changes to the EU's Third Energy Package Gas Directive regulating gas imports when the topic comes up for discussion Friday in Brussels.

The proposed changes would effectively extend existing rules to cover offshore pipelines. The posture signals a direct confrontation with Germany over the construction and operation of the controversial Nord Stream 2 pipeline that Berlin is currently building with Russia.

On Thursday, the Foreign Ministry released a statement saying: "France intends to support the adoption of this directive. Work is continuing with our partners, in particular with Germany, on modifications that could be made to the text."

Moscow, we may have a problem

The changes, which would regulate gas from third-party providers, could eventually make the project less profitable or even cost prohibitive. Friday's vote, put on the agenda by Romania — which currently holds the rotating presidency of the EU — will not be binding, but instead move to the European Parliament for negotiation.

The European Commission has voiced criticism of the pipeline project as it runs counter to the aims of European energy independence. The European Council, which represents member states, has so far opposed such changes. Russia, for its part, has taken up the issue of EU rules with the World Trade Organization (WTO).

Germany has been lobbying EU partners to support the German-Russian project but has made little progress in allaying criticism, mostly from eastern and central European states, as well as Ukraine and more recently — and more vocally — from the United States.

Critics say the project puts European energy independence at risk, giving Russia outsized control over supplies. Nord Stream 2 will be operated by the Russian gas giant Gazprom and deliver Russian natural gas to Germany via a Baltic Sea pipeline. The EU rule changes would also bar suppliers from operating their own pipelines.

Speaking at a meeting of the so-called Visegrad States — the Czech Republic, Hungary, Poland and Slovakia — in Bratislava, German Chancellor Angela Merkel addressed the issue of energy independence saying, "There is no way that we intend to make ourselves solely dependent on Russia." She spoke of Germany's plans to build new liquefied natural gas (LNG) terminals as evidence of its energy diversification.

Although Russia accounts for 30 percent of gas imports to Europe, natural gas makes up less than 10 percent of the bloc's overall energy mix. The United States is keen to increase sales of LNG to Germany and the EU, which is likely one major reason President Donald Trump has been so vocal in his opposition to the Nord Stream 2 project.

Berlin has also been quick to counter criticism from Trump and others by pointing out that the EU is currently investing heavily in LNG terminals in Poland. Poland has been an outspoken critic of Nord Stream 2.

US ambassadors warn of Russian blackmail

On Thursday, US Ambassador to Germany Richard Grenell, along with Carla Sands and Gordon Sondland — US ambassadors to Denmark and the EU — wrote in a Deutsche Welle guest commentary that, "Nord Stream 2 will heighten Europe's susceptibility to Russia's energy blackmail tactics."

Grenell previously made headlines in Germany when he warned companies involved in Nord Stream 2 that they could face US sanctions if they didn't pull out of the project. Sondland warned EU leaders that President Trump had "many, many tools" to "curb and stop the project" if Germany refused to do so on its own.

The route of Nord Stream 2 bypasses Ukraine, thus robbing it of transit fees and making Germany Western Europe's main distribution hub. Trump has criticized German payments to Russia as he says it only strengthens Moscow's position in the region, especially as regards Ukraine. Chancellor Merkel has said that Germany wants Ukraine to remain a transit country and that she has consistently conveyed that desire to Russian President Vladimir Putin.

Wolfgang Büchele of the German Eastern Business Association (OAOEV) also warned against rule changes: "We find it disconcerting that an economically sensible project in which a number of European companies are financially involved, among them some from France, is now being called into question as a result of irrelevant political deliberations and sustained pressure from the United States."

Not everyone in Germany agrees with the chancellor

Although Chancellor Merkel has long been a proponent of the pipeline, not everyone in Germany shares her enthusiasm. Norbert Röttgen, a member of Merkel's Christian Democratic Union party (CDU) and head of the parliamentary Foreign Affairs Committee, told the German newspaper Tagesspiegel that Germany has "isolated" itself on the issue.

Röttgen said that the German government's policy "has been one-sided for years, and not taken opposition to the plan by the majority of EU states, or the security concerns of our eastern European neighbors, into consideration."

Although Reinhard Bütikofer was critical of Richard Grenell's DW column, the co-chair of the European Green Party said, "It is extremely embarrassing for German politics that our government insists upon being the very last to acknowledge that Nord Stream 2 runs counter to European and German interests."

Bütikofer later released a tweet with the words, "If you can't bang your head through a wall, at some point you should stop charging into it."