Opinion: The near miss with Nord Stream 2

What was that all about? A Franco-German crisis played out on the Brussels stage? And why does President Macron not want to be seen in public with Chancellor Merkel? DW's Christian F. Trippe turns marriage counselor. 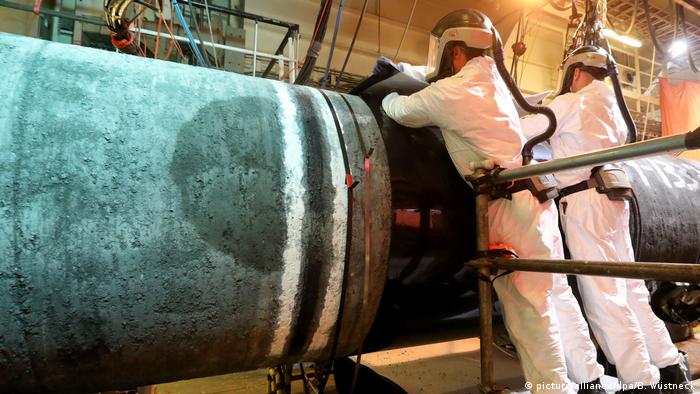 It was the sort of political affront that is usually only exchanged between countries with a profound aversion to one another. However, if such an affront occurs between countries that have only just signed and sealed their oh-so-steadfast friendship, then it must be love. Or heartbreak. Which is, of course, even worse.

For four years, a Russian-led consortium has been laying a natural gas pipeline across the Baltic Sea. The project is called Nord Stream 2, and from the outset it was unpopular among EU members in Eastern Europe, detested even.

But since the consortium includes several German companies as well as a partly state-owned French multinational energy company, the pipeline's opponents were unable to find any leverage in Brussels to stop it. When Germany and France join forces, they usually chart the EU's course.

But then on Thursday, a sudden, unexpected turn of events took some German politicians completely aback. The French government, Paris made it known, was joining the ranks of the Nord Stream 2 opponents. They planned to put the brakes on the project as it entered the home straight. The EU would impose so many constraints that Nord Stream 2 could have become uneconomical in the medium term.

That was the opponents’ plan in any case. But it didn't come to that.

To cut a long and complicated story short, at the eleventh hour, Germany and France on Friday reached agreement on one of those proverbial Brussels-style compromises: a song and a dance, and everything remains pretty much the same.

All talk, no action

So why the carry-on? Why threaten to switch sides just as German Chancellor Angela Merkel was meeting representatives from those Eastern European states that wanted to prevent the pipeline at all costs — but didn't know how? But that wasn't the only insult. French President Emmanuel Macron had already announced he wouldn't be traveling to next week's Munich Security Conference, where he had been due to appear with the chancellor.

Frustration is growing in Paris that progress with the German partners on a joint security policy is too slow. Berlin is all cheap talk and no action. The Germans and the French want to build planes and tanks together; proposals have already been inked. But the two countries are unable to find a common strategy on weapons exports. The cultural gulf is too great.

Thus, speculation that the differences led to Macron canceling his appearance with Merkel can flourish. That he had grown tired of soundbites and wanted to see some results. Paris and Berlin laid out an interconnected foreign and security policy in the recently signed Treaty of Aachen. The deal also stipulates both sides agreeing a common strategy ahead of every important political decision on Europe.

That was conspicuous by its absence in the commotion over the pipeline. But Berlin has tended to go it alone politically, without consulting Paris, and still does. That puts the Nord Stream 2 fuss in a different light. It was tit-for-tat. To show who was in the driving seat. A power struggle. Jostling to be on top.

Apple to introduce 'lockdown mode' against spyware 48m ago

Belgium: US company 3M agrees to massive payout for chemical leak 4h ago