Patrick Shanahan may have been well received by NATO, but it remains to be seen if Trump will let him stay Pentagon chief. Shanahan is filling in after his former boss Jim Mattis quit over disputes with the US president. 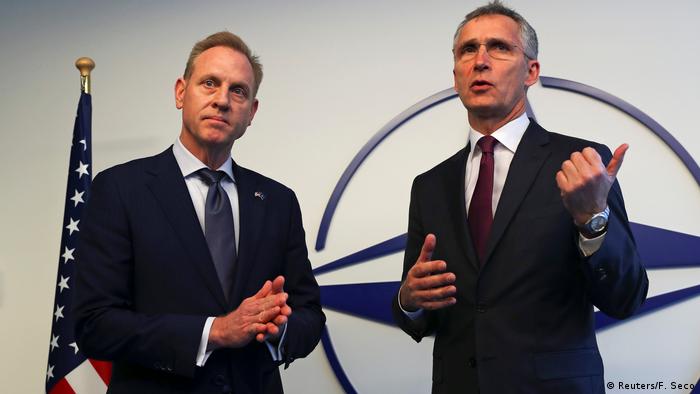 The new acting US defense secretary, Patrick Shanahan (above left), met with his NATO counterparts for the first time on Wednesday. The meeting was overshadowed, however, by uncertainty about Shanahan's tenure after several spats with President Donald Trump over his staff selection.

Shanahan landed in Brussels as part of a whirlwind tour that also included Baghdad and Kabul. He met NATO Secretary-General Jens Stoltenberg (above right) for the first time since taking over from hispredecessor Jim Mattis, who resigned last year over long-running disagreements with Trump.

"One of the other things that I am looking forward to during the time that we are together is to talk about the future of NATO, the capabilities that we can further develop," Shanahan said ahead of the meeting.

Russian missiles could be "significant risk" to EU

After the talks, Stoltenberg put to rest any speculation that President Trump's repeated digs at NATO had impacted their discussions with Shanahan.

"It was a very strong and a very clear message about the US ironclad commitment to NATO... also the very strong personal commitment he has to NATO," Stoltenberg said.

He added that Shanahan, a former executive at Boeing, was "very well received by all allies."

Stoltenberg's pronouncement will likely be met with relief in Europe. Mattis had been widely respected in NATO, and his departure was met with apprehension, as he was seen as one of the last men in Trump's orbit not peddling his "America First" ideology.

Ahead of the meeting, Stoltenberg said the defense ministers would discuss alleged missile treaty violations in Russia, saying that would present a "significant risk" to Europe. The NATO chief said they would discuss how best to counter a more aggressive Moscow without starting an arms race.

Pentagon: No US troop buildup in Poland 'at this point'

The US ambassador claimed Washington had pledged to increase its deployment of 4,000 troops in Poland. But shortly afterward, the Pentagon said that "speculation on troop increases or agreements" was unfounded. (13.02.2019)