As the Navalny case respins the geopolitical kaleidoscope, Poland is pushing Germany to scrap Nord Stream 2. DW looks at Berlin's options for the costly, controversial and delayed gas pipeline. 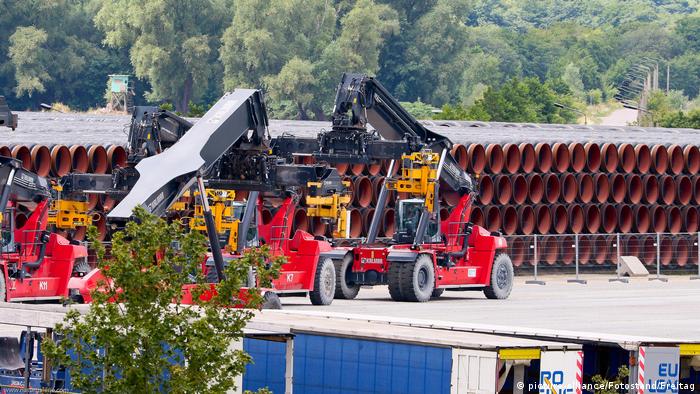 Only a day earlier, Polish Deputy Foreign Minister Pawel Jablonski said it was good some German politicians seem to have had a "wake-up call," adding it was regrettable that "it required such a dreadful incident to take place," referring to the confirmed poisoning of Russian opposition leader Alexei Navalny.

German Chancellor Angela Merkel faces rising political pressure within Germany to end her support for the Nord Stream 2 gas pipeline linking Russian supplies with German consumers. This adds to pressure from the US and Eastern European allies to scrap the controversial project.

"Our position was clear and consistent all these years," Jablonski told The Associated Press on Wednesday. "We have been indicating that this is not only an economic project, it's mostly a political project, and it can also be used as a military tool, as warfare, in case Putin would decide to stop the gas flowing through Ukraine."

If Moscow succeeds "in re-establishing some form of Soviet-style control" over neighboring Belarus and Ukraine, then "this would be very dangerous for Poland," Jablonski said.

The Polish oil and gas firm PGNiG said in a statement to DW that "the pipeline strengthens the dominant position of the major supplier of gas to the EU and to its neighbors like Ukraine or Belarus," adding that it does not provide diversification of sources of gas and as such is not in accordance with the goals of the EU Energy Union. "The investor has disregarded the applicability of EU law to the pipeline," its statement read.

The 1,230-kilometer (775-mile) pipeline is set to run from Russia's Baltic port of Ust-Luga, but is on hold 160 kilometers off the German coast after US sanctions came into force late last year.

The €10-billion ($11-billion) project would then double Russia's direct export capacity to Germany as a first entry point into the European Union to 110 billion cubic meters per year (bcma).

With nuclear power being phased out entirely in 2023, coal in terminal decline and the gradual ending of Dutch gas from the North Sea, Germany faces the challenge of securing stable energy sources and managing the uncertainties of solar and wind power.

The ball is now in Berlin's court. So, what are its options?

Critics of scrapping the project point to the likelihood of litigation from companies involved in Nord Stream 2 and its onshore connecting pipelines. "In turn this would result in massive damages, running into billions of euros to be paid," Katja Yafimava, a senior researcher at the Oxford Institute for Energy Studies Natural Gas Research Program, told DW.

Yafimava believes it would also have a negative impact on how Russia sees doing business in the EU. "It would not be a big exaggeration to compare any possible attempt by Germany and/or the EU to pause/cancel Nord Stream 2 as an attempt to make the Iron Curtain 2.0," she said.

Moreover, every EU member state might have to prepare to become a US target if Washington got its way. Today, the focus is on Nord Stream 2, "but tomorrow it could be on computers, ships, cars or something else," said Daniel Caspary, head of the German conservatives group in the European Parliament.

Not all agree with this analysis. "The linkage of US LNG [liquefied natural gas] sales with US opposition to Nord Stream 2 is not grounded in technical, political or market reality," Benjamin Schmitt, a former European energy security adviser at the US State Department, told DW. "Rather this faux linkage has been advanced across Kremlin disinformation platforms and by some Nord Stream 2 supporters in Europe in order to set forth a false choice," he said.

"US opposition to the Kremlin-backed project has been strongly bipartisan, starting with the Obama administration where the project was opposed in public statements by an array of senior officials including Vice President Joe Biden, who called Nord Stream 2 'a bad deal for Europe,'" Schmitt said.

European Commission President Ursula von der Leyen is reportedly working on developing sanctions similar to those used by the US. Washington is currently threatening to impose more sanctions on companies involved in the pipeline.

But it would be a paradox that has not gone unnoticed. Süddeutsche Zeitung, for example, wrote last week: "The government waved goodbye to a fiction, one that made it possible to slap Russia with sanctions one day and court it as a business partner the next."

Decoupling the Navalny case from the commercial narrative has a certain attraction. "I actually don’t think there will be no sanctions. I think they may be decoupled from Nord Stream 2. Merkel souring from Trump’s treatment doesn’t mean she is a total 'Putinversteher' [Putin whisperer]," Ariel Cohen, from the Atlantic Council, told DW.

Germany has long insisted that the project is strictly commercial, and that there should be a distinction between the commercial and the political, said Anna Mikulska from the Center for Energy Studies at Rice University.

Is LNG better than diesel?

Option 4: Continue, but appease the US by raising German gas imports

Officials in the Economy Ministry in Berlin reportedly believe the US has gone after Nord Stream 2 so aggressively mainly because it wants to sell its own gas to Europe. The German government has long hoped that the construction of an LNG terminal in Brunsbüttel outside of Hamburg would be enough to assuage the US.

But, in fact, the two sources can be complementary, others argue. "The more diversification the better," Kirsten Westphal, senior associate at the German Institute for International and Security Affairs, told DW. "Germany is well connected to other LNG terminals and thus flexibility in the integrated northwestern European market is high," she said. American LNG could be delivered today via the LNG facility in Rotterdam.

Again, this is contested. Schmitt argues that Nord Stream 2 is not being developed to bring significant new gas volumes to Germany and Western Europe, but rather to harm the economic and strategic security of Ukraine by providing an alternative conduit for Gazprom to sell its gas to European markets.

He says only 9.9 bcma of the 55 bcma Nord Stream 2 pipeline capacity is actually allocated for delivery to Germany and points west, with the remainder set to exit Germany en route to the Czech Republic and ultimately a gas hub in Austria — the current de facto end point of the Ukrainian gas transit route.

Option 5: Fudge and hope for the best

A fudge seems to be the most likely option. After all, as Merkel's spokesman Steffen Seibert said earlier this week, Berlin was "certainly not talking about months or the end of the year" in waiting for a reply from Moscow over Navalny.

This might allow for the government to delay or a water down German sanctions against Russia, but use the sanctions rhetoric as a bargaining chip.

"The bottom line: Merkel is likely to fudge. She would placate the US by moving along on some LNG purchases; temporarily suspend — but not terminate — Nord Stream 2, and extract from Putin a commitment to the Ukraine gas transit," Cohen said.

"A lot will depend on Navalny's outcome. If he fully recovers, Germany may want to turn the page over. If he is left incapacitated, it will be more difficult to do," he concluded.