All eyes are on the chancellor as calls for Germany to end the Nord Stream 2 gas pipeline grow louder. By pulling the plug on the pipeline, Angela Merkel could make history all over again, DW's Miodrag Soric writes. 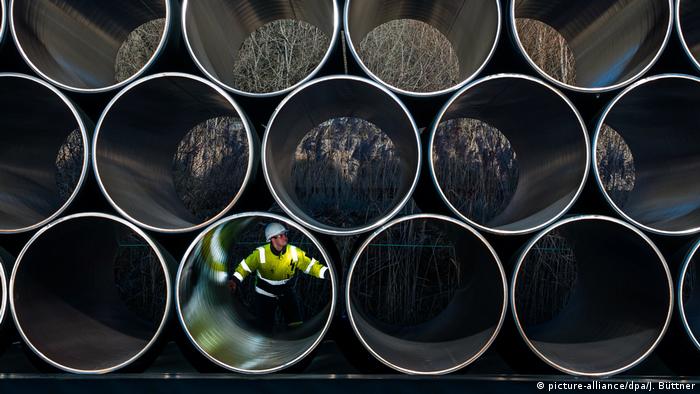 German Chancellor Angela Merkel has a tendency to hesitate. Whatever decision she makes regarding ties between Germany and Russia, the governments will find a way to get on with one another again. Their gas-based relationship has survived all political turbulence so far.

Back in the 1970s, the US opposed plans to build a pipeline between the Soviet Union and Western Europe, with officials calling their West German counterparts shortsighted for providing the "enemy" with hard currency. At the end of the 1970s, US President Jimmy Carter and Chancellor Helmut Schmidt fought over Germany's energy policy and its trading of natural resources with the Eastern bloc. In 1981, Carter's successor Ronald Reagan criticized European-Soviet plans for a pipeline at the G7 summit in Ottawa. And current US President Donald Trump has had nothing good to say about Nord Stream 2.

The White House's arguments have remained roughly the same: Energy dependence on Russia weakens the United States and its allies. The German response is encapsulated in Schmidt's statement that "those who trade with each other do not shoot each other."

Schmidt's argument is less valid now. Even the greatest pessimists cannot really imagine a conflict between NATO and Russia. Those in favor of the Nord Stream 2 project say that business should be separated from politics, especially if politics is based on values. This principle has served Germany so far: The gas never stopped flowing, even when Moscow threatened the West with nuclear missiles, locked up dissidents in the Gulag, marched into Afghanistan or declared martial law in Poland.

Cynically, Russia's government is banking on Germany's loyalty. The hope in the Kremlin seems to be that there will be no consequences for business, whether political opponents are persecuted or not. But anyone in the West who promotes such a pact sides with Russian President Vladimir Putin. Moscow has barely even tried to deny its involvement in the poisoning of Russian opposition leader Alexei Navalny. Putin's regime seems certain once again that Germany will make empty threats on which it will not act.

This is a risk that Kremlin officials think Russia has to take. With demonstrations in the Far East and in Belarus, as well as constantly falling living standards, Moscow is also worried that mass demonstrations could break out in Russia too. So, it is clamping down on dissent and opposition more than ever. Though Navalny may be Putin's most important opponent, he is one of many.

Has the Kremlin miscalculated? The days when Germany depended on gas from Siberia are over. Alternative energies are the future, maybe not in Russia but in western Europe certainly. And in any case there are many nations that want to sell gas to Germany. These days there is a surplus of energy in the world. And gas is not a "clean energy." Though it may produce less CO2 than coal when it is burned, during extraction and transport it releases much more methane, which in turn pollutes the environment.
Read more: Navalny, Novichok and Nord Stream 2 — Germany stuck between a rock and a pipeline

In these difficult economic times, Merkel would gain a lot of political capital if she were to drop the Nord Stream 2 project altogether — instead of simply promising not to "rule anything out." Poland, France and the Balticmember states would surely become more compliant in various key EU-related issues if Germany were to distance itself finally from Russia. In her last year in office, Merkel could make history again: She could bring Europe forward by giving up on a regime that has no future anyway. Moreover, Russia is not an important trade partner. If it cannot export its resources, it will go bankrupt.

The end of Nord Stream 2 would send a signal with a far-reaching impact: German businesses would withdraw from Russia's market even more and Putin's attempt to modernize Russia with the economic support of EU countries would finally have failed.

Translated from the German by ACT