Five of the G7 nations, without the US and Japan, have agreed to an ocean plastics charter. But will such non-binding measures be enough for the world's industrialized countries to beat plastic pollution together? 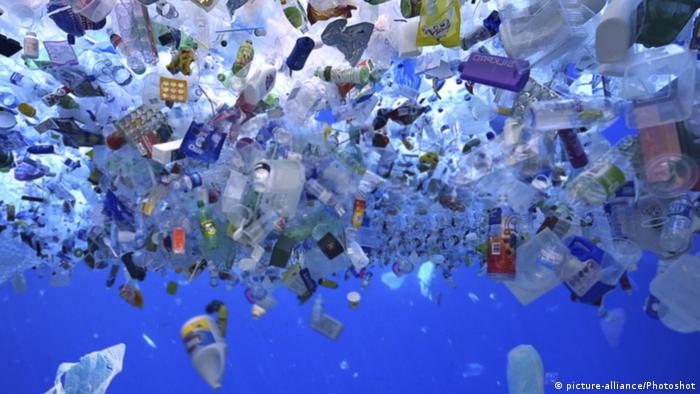 Hate crimes, discrimination, inequality and nightmare events like the deadly war in Syria can make us feel that our world is upside down. But these weren't the only urgent issues world leaders had to address. Climate change and plastic pollution are much quieter threats — but relentless and fierce nonetheless.

In the Group of Seven's (G7) closing communique out of Charlevoix, Canada, on Saturday, the leaders of Canada, France, Germany, Italy and the United Kingdom pledged to combat ocean pollution through a G7 Ocean Plastics Charter. The United States and Japan declined to put their names on the resolution.

The charter outlines a "resource-efficient lifecycle management approach to plastics in the economy," which includes working toward making all plastics recyclable by 2030, reducing single-use plastics and promoting the use of recycled plastic. It also pledges to build out recycling infrastructure, and innovate around more sustainable technologies.

Greenpeace International Executive Director Jennifer Morgan lauded the signal, but called the plans tepid. "While the leadership to outline a common blueprint is good news, voluntary charters focused on recycling and repurposing will not solve the problem at the source," Morgan said in a statement.

"Governments must move beyond voluntary agreements to legislate binding reduction targets and bans on single-use plastics, invest in new and reuse delivery models for products, and hold corporations accountable for the problem they have created," Morgan continued.

Although many are welcoming the initiative, it won’t be the first time world leaders have expressed good intentions around tackling the issue. In the past, it hasn't gotten much further than that — an intention.

Despite several voluntary multilateral agreements against marine pollution, plastic waste continues to accumulate in the oceans. Almost 800 animal species are affected by marine debris, marine animals keep dying as a direct result of plastic, and microplastics have spread to the world's most remote areas.

Environmental groups are urging adoption of legally binding rules and stronger national plans against plastic waste. Only then will the shaking of hands and nodding to one another at the G7 summit amount to something for the planet. 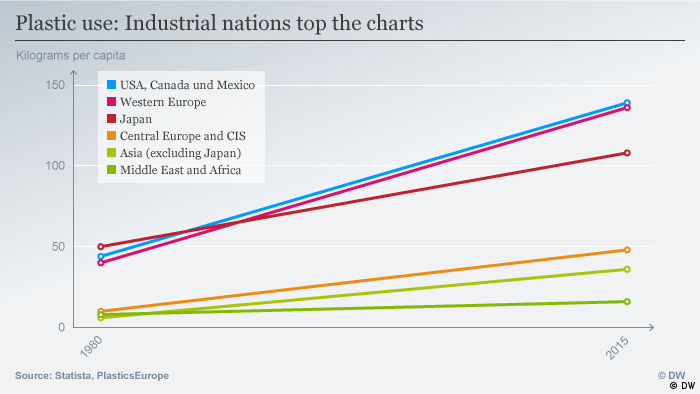 A history of good intentions

Plastic is not a new topic for world leaders. In 2015, the G7 in Germany launched an action plan to combat marine litter, which was then reaffirmed in 2016 in Japan and further discussed in 2017 in Italy.

Even back in 1995, more than a hundred governments committed to protecting the marine environment from the impact of land-based activities. Since then, many agreements, strategies and action plans have followed.

Reducing marine pollution is among the United Nations Sustainable Development Goals, and the United Nations Environmental Program launched its Clean Seas campaign last year to cut down on the use of microplastics and single-use plastics.

A zero plastic waste charter could seek to reduce plastic waste worldwide by motivating G7 countries to develop national strategies and work together with industry for more easily recyclable plastic or alternatives to it, as well as to support better waste management in developing countries.

But including more than abstract goals in the charter proved a huge challenge. Getting G7 countries to commit to timelines and targets was essential, said Ashley Wallis, water program manager with Environmental Defence Canada. Ideally, this would include reducing plastic pollution 85 percent by 2030, she told DW. However, such a commitment ultimately proved a step too far for some countries. 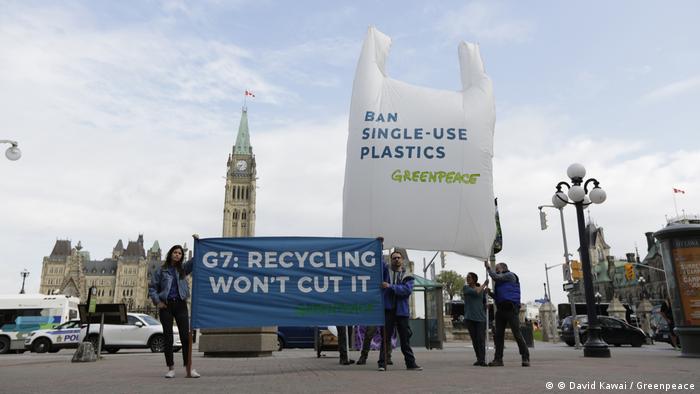 Other doubts over the charter also remain. When asked for further information, Marilyne Lavoie — spokesperson for the Canadian environment office — gave DW the sparing answer that "the charter will be discussed among leaders during the summit."

Two days ahead of the summit, a spokesperson for the German environment ministry told DW that the ministry had not even heard about the plastics charter. The ministry added that it will evaluate any plastic initiatives once it has informed itself with regard to them.

The United States is also not likely to bring the topic forward. As a sign of how the Trump administration stands on plastic pollution, in August 2017 it revoked a ban on the sale of plastic water bottles in national parks such as the Grand Canyon.

National efforts first, but not only

Despite the elusiveness of a global plastic pollution charter, nations have already begun to battle the problem.

More than 60 countries around the world have introduced bans and levies to curb single-use plastic waste, the UNEP report shows. Kenya and Rwanda are two of 25 countries having introduced national bans on plastic bags in the African continent, which is home to most countries with such a ban.

Promising initiatives are on the rise elsewhere, too. Costa Rica, for instance, aims to ban all single-use plastics by 2021, becoming the first country in the world to do so. Also India has announced intentions to abolish single-use plastics by 2022. And the EU took a major step earlier this year by requiring that all plastic packaging be reusable or recyclable by 2030.

Of G7 countries, only three have in place national regulations to reduce plastic pollution. France is leading the way in Europe with a current strict ban on non-compostable plastic bags, as well as on all single-use plastic cups, cutlery and plates by 2020.

Such national measures are a key step in addressing plastic pollution, Khan said. If G7 countries establish domestic rules, any overarching agreement would be secondary, she added.

For the fight against plastic pollution to be effective, binding goals would come first, followed by national plans to achieve those goals and being backed up by a global plastic convention, the German Greens political foundation Heinrich Böll Foundation stated in a report.

Along the same lines, German Chancellor Angela Merkel said Tuesday that European and national measures will not do enough to help the seas.

Germany's Angela Merkel sharply criticized Donald Trump's decision to retract his endorsement of the G7 communique. The German chancellor said the EU would continue preparing countermeasures to US metal tariffs. (10.06.2018)

After the EU unveiled a high-profile push to rid the continent of plastic waste, now companies like McDonald's, Costa and Evian are announcing their own initiatives. Can this help solve the world's plastic trash problem? (24.01.2018)

From plastic waste to hot meals

To stop Kremlin from earning big from energy, the G7 countries have agreed on an oil price cap scheme. The aim is to incentivize Russian oil buyers to participate.