A veterinary team in Thailand tried in vain to rescue a pilot whale after it came to grief in a channel in the country's south. An autopsy revealed 80 plastic bags clogging up its guts. 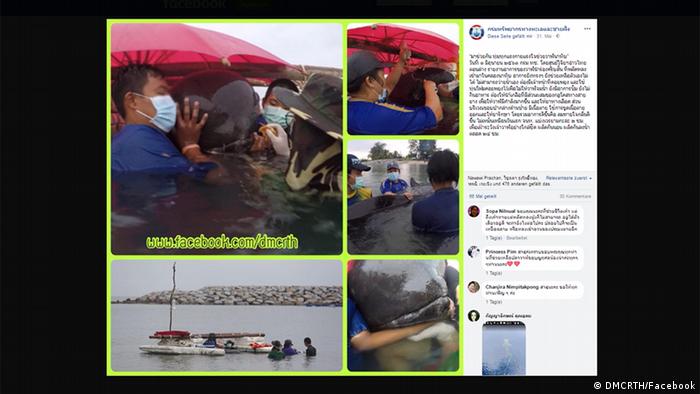 A pilot whale has died in Thailand after swallowing more than 80 plastic bags, the Department of Marine and Coastal Resources announced on Saturday.

A veterinary team tried to rescue the small male ocean mammal after it became stranded, but was unsuccessful.

An autopsy later revealed 8 kilograms (18 pounds) of plastic bags in its stomach, the department said.

Before his death on Friday afternoon, the whale vomited five bags. Local media reported that the whale had been found in poor condition a few days earlier in a channel in the south of the country near the Malaysian border.

Thon Thamrongnawasawat, a marine biologist and lecturer at Kasetsart University, told AFP news agency the bags likely made it impossible for the whale to eat any nutritional food.

"If you have 80 plastic bags in your stomach, you die," he said.

He said at least 300 marine animals, including pilot whales, sea turtles and dolphins, die after eating plastic each year.

Thailand is one of the world's largest consumers of plastic bags.

Researchers have accidentally improved a naturally occurring enzyme to enhance its plastic-eating abilities. The modified enzyme, which can digest plastic used in bottles, could help in the fight against pollution. (17.04.2018)

Microplastics locked up in the Arctic will be re-released into the world's oceans as climate change melts sea ice. Such plastic pollution could have broad consequences for marine — and human — life. (24.04.2018)