Finally, an alternative to plastic for labeling organics | Environment | All topics from climate change to conservation | DW | 05.06.2018

Ironically, organic fruit and vegetables are often packaged and labeled with plastic. But such unnecessary packaging and plastic stickers could be replaced by an innovative laser mark. Will it catch on? 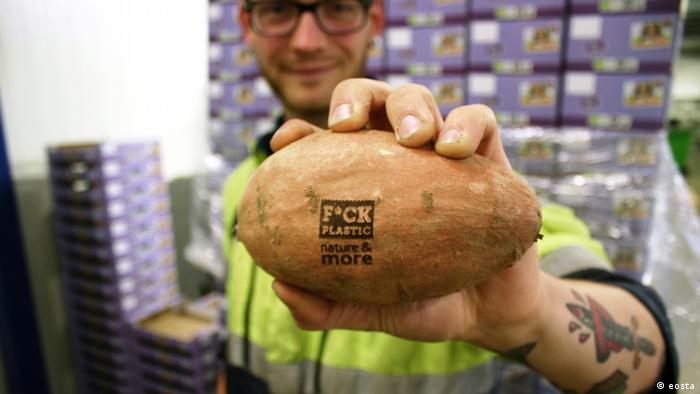 Tomatoes in plastic tubs, cheese and coldcuts packed in plastic, shrink-wrapped organic cucumbers — a lot of plastic waste comes through our shopping carts.

But it doesn't have to be that way: The Dutch company Eosta "engraves" its organic fruit and vegetable labels directly on the ware.

Under European Union regulation, organic products have to be specially labeled so that customers can distinguish them from conventional products. Yet this results in a bitter irony: Customers who seek to be more eco-friendly by buying organic end up getting their goods wrapped in additional plastic.

But through introduction of a laser mark, such plastic packaging could disappear. 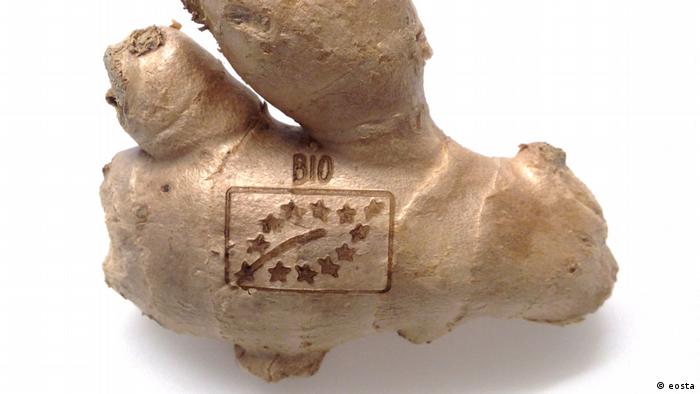 Ginger is among products that could get laser-marked

With ever more people living as singles or on-the-go, food is increasingly offered already prepared, or in pre-packaged portions.

In Germany for example, the amount of packaging that ends up in the bin every year has recently increased 2 percent to 18.2 million tons, according to the German Federal Environmental Agency.

Consumption habits are changing as lifestyle changes, including for example booming mail-order businesses and the ongoing trend of take-away food and drinks.

But even in supermarkets, the amount of pre-packaged fresh food on the shelves is increasing. Customers rarely get a choice these days whether they want to buy packaged or non-packaged products. 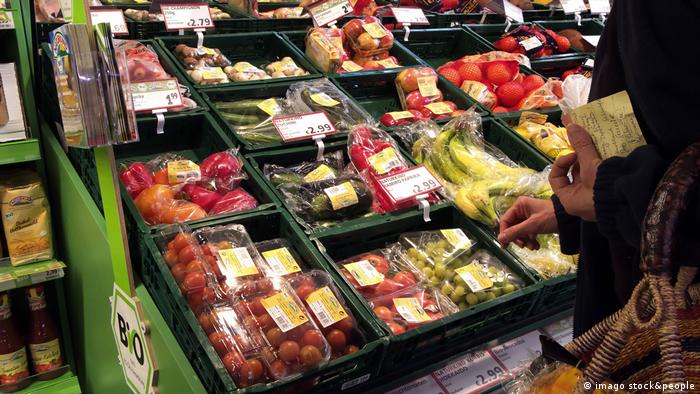 You can choose to buy organic, you may end up getting even more plastic packaging

Netherlands-based laser technology company Eosta is trying to introduce to the market a real alternative to plastic packaging. In March 2018, Eosta received the Dutch Packaging Award in the sustainability category for its innovative packaging method "natural branding."

When Eosta and the Swedish supermarket ICA ran a trial to sell organic fruit and vegetables with natural branding in 2016, they say this replaced millions of pieces of plastic packaging.

According to the Dutch company, the laser mark has no negative effect on the look, taste or durability of the product. The technology is particularly suitable for fruit and vegetables with a hard shell, such as kiwis, avocados and cucumbers. 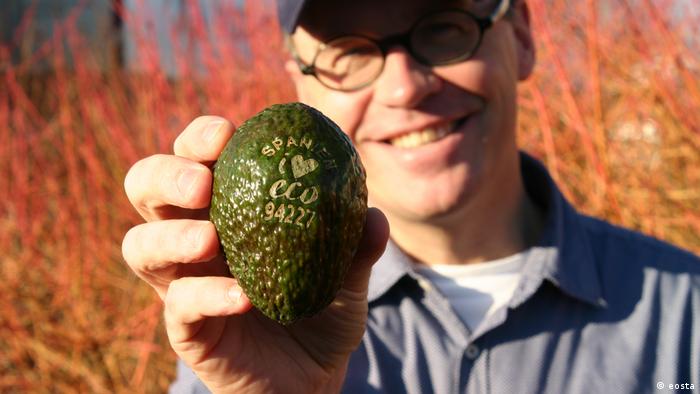 But there is a little snag: On small foods, such as grapes or physalis, this method can not be used. Also with citrus fruits, natural branding is not applicable — at least for now — as these fruits can quickly replace pigments in their peels, making the logo no longer visible.

The German supermarket chain REWE has launched a trial, freeing organic avocados and sweet potatoes from their packaging.

Instead of annoying, sticky labels, the organic logo was burned into the outer layer of the shell by laser. The marked fruit is only available to a very limited extent so far.

Read more: 'Not enough action from EU on plastic'

REWE spokesperson Thomas Bonrath told DW that the method of natural branding remains an interesting technology for the future. It presents a limited field of application, which still has to be developed to optimal practical maturity, he added.

But what would customers choose if they had the option: fruits and vegetables labeled with a laser or those traditionally labeled with stickers or packed with plastic? Can natural branding be a real solution to the problem of plastic packaging?

A customer at a supermarket in Bonn said she would wants to be informed about potential negative effects of the laser mark on taste or shelf life.

"I would rather prefer the cucumber without plastic, because avoiding plastic would be my biggest goal," she told DW.

But consumers also tend to be penny-wise. "I would pay attention to the price and not to the packaging," another customer told DW.

Rolf Buschmann, a packaging expert with BUND (Friends of the Earth Germany), believes the method of laser branding is an excellent solution to avoid using polluting materials, such as adhesive labels or plastic packaging. And he does not believe the laser mark would be hazardous to health.

"Many of these foods have an outer shell that can be removed if necessary. In most cases, I would assume that short-term heating does not alter the food, because it is just a superficial mark and deeper layers are generally not affected," he told DW.

How about the price?

With price point being such a decisive factor, even among eco-friendly shoppers, the question must be asked: Does the laser mark affect the price of products, compared to conventional packaging?

Apart from reducing or avoiding packaging material, natural branding could also counteract food waste. Thanks to the laser mark, organic products could be offered individually instead of in bulk.

In the future, supermarket customers would be able to buy just as much as they really need instead of being forced to choose larger packaging units, which often end up in the garbage.

The slow-growing trend towards plastic bans

Over the past 12 months alone, different countries across the world have taken it upon themselves to restrict the sale, use and manufacture of day-to-day plastics. And there are more plans in the works. (12.01.2018)