2018 is shaping up to be a breakthrough year in terms of awareness around the plastic pollution problem. But we're nowhere near solving it yet, says DW's environment team leader. 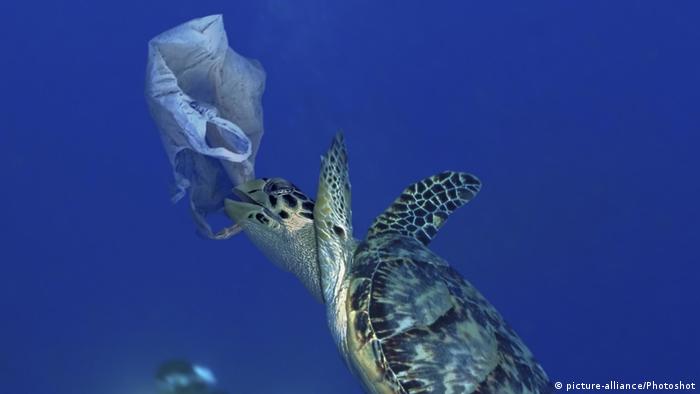 People seem to finally be waking up to the global issue of plastic pollution – it was the focus of this year's Earth Day, and also World Environment Day in 2018 has the theme beating plastic pollution.

The unfortunate recent end of a whale in Thailand provides a timely illustration of the problem. It died with 80 plastic bags in its stomach, which prevented it from getting enough nutrition to survive. That whale, like innumerable other marine animals, died a slow and painful death as a result of our consumption habits.

But the plastics problem, and its accompanying disturbing images, are not new at all.

Already in 2016, scientists warned that if current trends continue, plastic will outweigh fish in our oceans by 2050.

Despite bans on plastic bags in some African countries, and a planned ban on other single-use plastic items in the European Union, the sad truth is that the world is probably still pretty far from "peak plastic."

If current trends continue, there will be around 12 billion tons of plastic waste – twice as much as the current 6 billion tons – in our environment by 2050.

So what needs to be done?

Change around plastic pollution will only happen the way environmental change has ever happened: Through concerted public pressure.

Decades ago, use of highly poisonous pesticides like DDT was only stopped after the public became aware of the risks and pushed for a ban.

Likewise, the massive environmental problem of air pollution is being addressed through governments prioritizing public health and controlling dangerous pollutants.

In terms of environmental problems, plastic has the advantage of being a physical, tangible thing – this very visibility is among the reasons the plastic problem is finally entering the mainstream.

David Attenborough's Planet Earth II is among the media products lending publicity to the issue.

You could even say concern about plastic pollution has become a trend.

But can the growing momentum around the topic be harnessed to transform this trend into real change?

Well, that depends on you.

Awareness is a positive and necessary first step. But next comes action.

Not only do consumers need to change their behavior, to reduce their single-use plastics – consumers also need to send the signal that they care about the issue, and want the system to change.

Also, businesses will need to do their part, coming up with alternative products and models to allow a low-plastic society to flourish and continue to enjoy modern conveniences. Indeed, many businesses are ready to embrace a bioeconomy.

But ultimately, it's up to governments to create frameworks that make change possible. And it's up to us to demand that.

Are you ready to change your own habits, and call on your government to make that a system change?

Until then, we'll continue to drown in our own waste.

Sonya Diehn is the Environment Team Leader for DW.

Most of the plastic in our oceans doesn't get dumped there directly, rivers carry it to the sea. As it turns out, a very small number of them do most of the damage. (30.11.2017)

Four eco-hacks you need to know

Forty-five years after the first Earth Day, green living has become a matter of course for many. But what earth-friendly practices really help the environment? DW busts some eco-myths - and provides a few useful tips. (22.04.2015)

Opinion: Shall I be mother? When doctors make the worst patients 14h ago