Earth Day: Time for a plastic-free planet | Environment | All topics from climate change to conservation | DW | 22.04.2018

This Earth Day, activists are calling for an end to plastic pollution. DW has been following the impacts of disposable plastic and efforts to do away with it — by everyone from artists to policymakers. 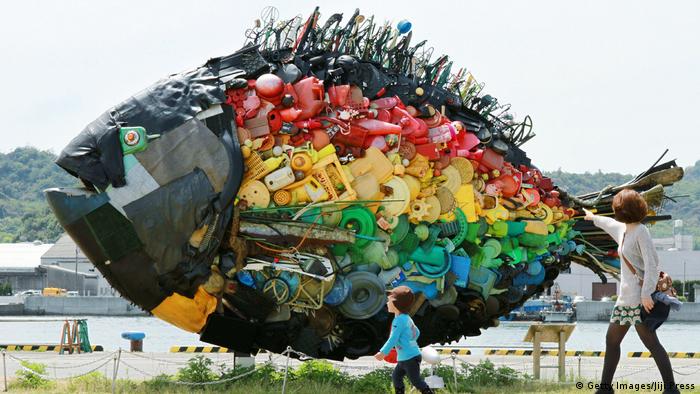 Plastics are everywhere. Made from fossil fuels, consuming energy only to be thrown away, piling up in landfills, clogging our oceans, and contaminating food chains — they somehow sum up everything that's wrong with how we treat our planet.

Which is why this year, Earth Day – which has brought people around the world together every April 22 since 1970, to show their commitment to protecting our the planet — is taking on plastic pollution.

Plastic doesn't biodegrade — it sticks around forever. So it's no surprise so much of the stuff is polluting the environment.

Yet the statistics are shocking: We produce close to 300 million tons of plastic waste each year, and an estimated 8 million tons of that ends up in the sea. Some collects together to form "trash islands," including the Great Pacific Garbage Patch — recently estimated to be three times the size of France.

The Earth Day Network is calling on us all to pledge to cut our plastic use, and has a handy calculator to help you work out just how much trash you're contributing to this global problem.

The initiative is building on momentum that has been growing around the world. Ever more of us are trying to cut plastics out of lives, clean up our communities, and demanding that policy-makers and companies take action, too.

This week, the UK announced it would ban plastic straws, drinks stirrers and cotton buds, as campaigners push for the government to go further and ban all single-use non-recyclable plastics.

The Brits have in part been galvanized by the BBC TV series Blue Planet, which explores the wonders of marine life and draws attention to the threats posed to it by pollution. But they're not alone in demanding change.

The European Union plans to make all plastics recyclable by 2030; and in other parts of the world, plastic bags, for example, have been outlawed for years.

There's also growing hope of action by the international community — a kind of "Paris Agreement" against plastic pollution.

One thing is for sure: If revelations over the extent of plastic impacts on the natural world — and potentially, human health — goes on, the pressure will only become more intense.

The slow-growing trend towards plastic bans

Over the past 12 months alone, different countries across the world have taken it upon themselves to restrict the sale, use and manufacture of day-to-day plastics. And there are more plans in the works. (12.01.2018)

A castle made from plastic bottles

Millions of tons of plastic end up in the world's oceans each year. A Canadian retiree in Panama is hoping to recycle some of this waste - by using old bottles to build homes in the heart of the Caribbean jungle. (26.06.2017)