'Stop Sucking' for the environment!

In the US alone, half a billion plastic straws are used every day, environmentalists say. Many of those end up in our oceans. Now there's an initiative to #StopSucking - you can still enjoy your cocktail without a straw. 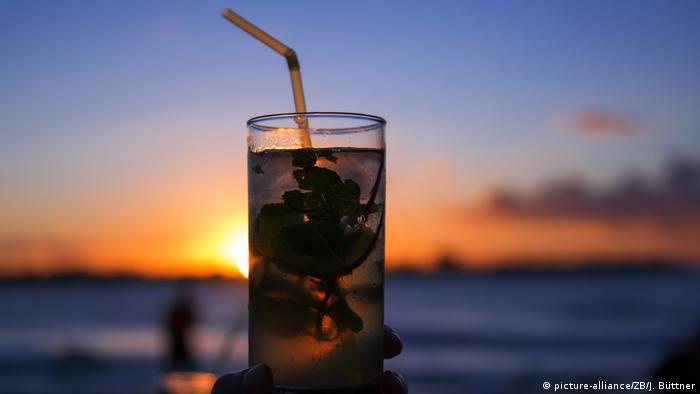 Too much "sucking" on a website is suspicious - particularly to web filters trying to protect viewers from offensive material.

"Caution: This profile may include potentially sensitive content," appears on a warning page you get redirected to when you want to enter @LonelyWhale's Twitter channel. "Do you still want to view it?"

But the Lonely Whale Foundation has a perfectly wholesome goal: to reduce the amount of single-use plastic straws.

"We bleed 10 million tons of plastic into the ocean every single year," says Adrian Grenier, co-founder of Lonely Whale. "And plastic straws are just a small fraction of that - but it's a great place to start."

The Stop Sucking initiative (campaigning under its Twitter hashtag #StopSucking) points out that people in the United States alone use 500 million plastic straws every day.

Make it a habit

"We all suck because we don't do enough for the oceans - and we all suck on single use plastic straws every single day, an average of two per person per day."

At the EU-hosted Our Ocean Conference in Malta this week, Adrian Grenier introduced the #StopSucking initiative, and even got participants in the room stand up and pledge to not use any more plastic straws.

"We're asking people to just make one small change and make it part of their habit," Grenier says.

Just like someone orders a soft drink possibly adding "no ice please," or a coffee "without milk and sugar, please," Grenier and his fellow activists are urging people ordering a drink to include the request "no straw, please."

Lonely Whale isn't the only initiative to tackle this environmental issue.

The Last Straw is campaigning to end the use of plastic straws around Australia, and the initiative 'Last Plastic Straw'in the US has picked the examples of straws to educate the public about the absurdity of single-use plastic in general.

Environmentalists point out that plastic straws are "totally unnecessary."

Not everyone, though, might be happy to let a dear habit go. This is perhaps even more the case because the human habit of using a straw is thousands of years old - historians date the use of drinking straws back to the third millenium B.C.

"In drinking unfiltered beer, a straw would have been necessary to penetrate below a layer of hulls and yeast floating on the surface," write historian Mary Voigt and anthropologist Solomon Katz.

Of course, people didn't have plastic back then - drinking straws were made mostly from reeds.

Researchers also found straws made of pure gold - apparently how the wealthy enjoyed a drink in ancient times.

In the 1800s, drinking become fashionable, allegly invented by a resident of Washington, DC, when drinking a mint julep cocktail.

Of course, they were made out of paper back then. In the 1960s and 70s, plastic took over the world.

Beer is filtered today, so any actual need to use a straw has long passed.

But even today, there might indeed be situations in which a drinking straw becomes necessary - for example, before on-screen or stage appearances after perfectly applied makeup.

No problem at all, Lonely Whale clarifies on its website: "We're not anti-straw, we're anti single-use plastics."

They point out marine-friendly alternatives, such as multiple-use straws made from metal or glass, as well as single-use paper straws.

In Cambodia, a young environmental activist even developed a biodegradable bamboo straw.

At the Our Ocean Conference in Malta, Adrian Grenier points out that his campaign "is about having a small, accessible, measurable effect on the world. It's not about doing everything at once."

Last September, the Lonely Whale Foundation set off to reduce single-use plastic straw use in Seattle.

In a city-wide campaign, they convinced hundreds of restaurants and bars, as well as two sports stadiums, to eliminate drinking straws completely - or to switch to paper straws, at the very least.

"We are looking to reach 60 million by the end of the year in Seattle alone."

In the end, #StopSucking is just one example how to "change our lifestyles and to change our perceptions of [...] how we want to live," Grenier says.

Compared with other sacrifices environmentalist may call for, #StopSucking seems to be a lifestyle change that might indeed not hurt too much.