′Our Ocean′ conference tackling plastic waste and other threats to our seas | Environment| All topics from climate change to conservation | DW | 05.10.2017

In Malta, experts from around the world have come together at an EU-hosted conference to seek measures to protect our oceans. The conference's aim is to establish concrete projects worldwide. Will they succeed? 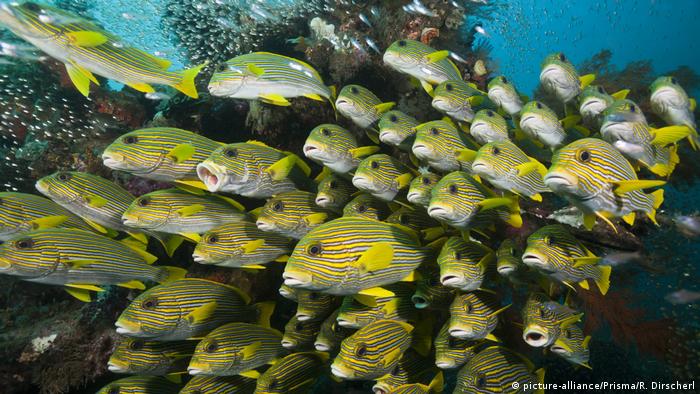 Plastic is now "on the menu," Britain's Prince Charles said as he kicked off the Our Ocean conference on Thursday, warning that "we are very close to reaching the point when whatever wild-caught fish you eat will contain plastic."

With heads of government or senior officials from more than 60 countries attending, the European Union-backed conference in Malta's capital Valletta announced a push for commitments to reduce marine pollution, manage aquatic resources and mitigate climate change.

The heir to the British throne said that with eight million tons of plastic waste entering the oceans annually, the world must switch from "throw-away, convenience lifestyles" to a recycling economy.

He also pushed for a stop to overfishing by ending "perverse" government subsidies and promoting investments in sustainable ocean economies.

Prince Charles first spoke publicly about environmental issues in the 1960s and has criticized climate change sceptics many times since, including at the Paris climate summit in 2015.

He also "reminded us that the deterioration of the coral reefs is both a tragedy and a serious wakeup call," said spokesperson Sophie Hulme of Ocean Unite. "He called for brave decisions from everybody in the room and restated his own personal commitment to protect the planet."

Speakers at the conference also include Afroz Shah, a lawyer and counsel at Bombay High Court in India.

"He gave an emotional plea for more action around plastic reduction," said Hulme, "and reminded us that it all starts with the individual. We litter because we have lost the sense of belonging."

Our Ocean conferences have been taking place annually since 2014. Their aim is to bring together world leaders and motivate them to finance concrete projects.

In hosting the Our Ocean 2017 conference, the EU pledged 550 million euros ($645 million) to support a slew of measures to improve ocean health.

According to the Our Ocean website, the conference scheme has kicked off about 250 projects, committing over 8 billion Euros and designating nearly 10 million square kilometers as new Marine Protected Areas since 2014.

That would make Chile the first country in the Americas to do so, ocean lovers commented on Twitter

Heraldo Munoz also announced the creation of two new marine protected areas around Chile. One of the marine reserve will comprise an area the size of France around Easter island.