European nations are trying to prevent the spread of COVID-19 with tougher measures across the continent. New York City sent elementary schoolers back to class to test if its school system was ready. 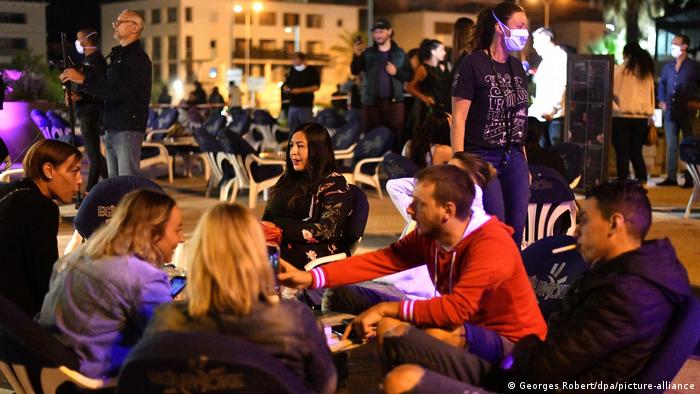 Spain, Poland, Finland, the Czech Republic and Slovakia all enacted new restrictions on Wednesday as case numbers surged across the continent.

The Netherlands, Northern Ireland, the Czech Republic, Latvia, Slovakia and Romania all saw record numbers of daily infections. Cases have also been alarmingly high in other countries, with France again recording more than 10,000 cases.

In Germany, Chancellor Angela Merkel made an impassioned appeal for patience and discipline as numbers increased. Merkel said Germany risks undoing the gains it has made, asking citizens to care for one and other, and calling for vigilance on hygiene measures such as social-distancing and mask-wearing.

"We risk everything that we have achieved in the past few months," Merkel said in a speech to the German parliament.

Germany reported 1,798 new coronavirus infections on Wednesday, a tally from the public health body Robert Koch Institute showed. The death toll rose by 17 in the past 24 hours.

The German federal statistics office, Destatis, meanwhile, said inflation fell below zero in Germany for the second time this year. Inflation dropped to minus 0.2% in September, two months after inflation was minus 0.1%. Destatis said the negative inflation rate was attributable to several things, including a reduction in value-added tax (VAT) which was introduced in July to slow the recession brought on by the pandemic.

Merkel has pledged a further €100 million to help developing countries procure future vaccines for the coronavirus. It came as the UN reinvigorated its fundraising drive for a common vaccine fund.

Russia: President Vladimir Putin said he intends to take the country's newly developed coronavirus vaccine before visiting his counterpart in South Korea, according to Russian state news agency TASS. The Kremlin did not say when the visit would occur. South Korean state news agency Yonhap said Putin would visit after the virus situation has further stabilized.

UK: British Prime Minister Boris Johnson has warned the country must be prepared for more "sacrifices," but did not further tighten social-distancing rules. He said the UK must maintain its policy of restricting social gatherings and imposing local lockdowns in areas with high infection rates.

In the Netherlands, Prime Minister Mark Rutte "urgently" advised people to wear masks while indoors in public places. More than 19,000 people in the Netherlands tested positive in the last week, up from nearly 13,500 a week earlier.

Spain: New restrictions have been announced for Madrid, with residents set to be barred from leaving the city except on essential trips.  Outsiders will also be banned from entering for non-essential trips under new measures for large municipalities with high infection rates.

Meanwhile, Ibiza has imposed new restrictions, including a ban on parties of more than five people, playgrounds being shut down and a 10 p.m. curfew for bars and restaurants. People are advised, but not mandated, to stay home for all but indispensable activities.

Czech Republic: The Czech Republic has announced a 30-day state of emergency starting on Monday, as case numbers rise. The measure will allow the restriction of residents' freedom of assembly, and courts will be able to levy higher fines for violations of medical safety guidelines. It does not plan to lock down its borders, but gatherings will be limited to 10 people indoors and 20 people outdoors. Most secondary schools will switch to distance learning. Sporting events will have no audience, but businesses, stores and restaurants will not be affected.

Slovakia: Neighboring Slovakia has also announced a state of emergency, starting on Thursday. The obligation to wear masks outdoors will also apply if the necessary minimum distance cannot be maintained. The number of participants in large events will be limited to 50.

Poland and Finland, have announced new measures for bars and restaurants.

Finland ordered all bars and restaurants to close at 1:00 a.m. local time (2200 GMT the previous day) and stop alcohol sales at midnight beginning on October 8 in order to stem the spread of the illness. While it has recorded among some of the lowest numbers of infections in Europe, the Scandinavian country has recorded more than 10% of its total cases in the last two weeks.

Poland has also ordered restaurants and bars to close early in areas that have been worst affected by the coronavirus. The establishments in those areas will be allowed to stay open until 10:00 p.m. Polish Health Minister Adam Niedzielski said there will be high daily numbers of new coronavirus cases in the coming days, and that wearing face masks outside the home would soon become mandatory in hard-hit areas.

The decision to curb bar opening hours follows similar moves in France, where bars have been ordered to close early in Paris and several other big cities.

Indian Vice President M. Venkaiah Naidu tested positive for the coronavirus and was advised home quarantine. His office said in a tweet that Naidu, 71, is asymptomatic and in good health.

India recorded 80,472 new confirmed COVID-19 cases in the past 24 hours, showing a decline from a record high two weeks ago. The Health Ministry raised India's confirmed total to more than 6.2 million on Wednesday with 2.5 million in September alone. It also reported 1,179 fatalities in the last 24 hours, raising the death toll to 97,497.

Meanwhile, a serological survey conducted by the state-run Indian Council of Medical Research found that 6.6% of the population above 10 years old have so far been exposed to the coronavirus.

Indian states will now be allowed to reopen schools and other educational institutions in a phased manner, as well as movie theaters.

North Korea's UN ambassador Kim Song said the coronavirus was under control. "Thanks to the far-sighted leadership of the government of the DPRK [North Korea's initials] … the anti-epidemic situation in our country is now under safe and stable control," said Kim.

A southern province in The Philippines will go under a mild lockdown beginning this Thursday. President Rodrigo Duterte announced the Lanao del Sur province and its capital, Marawi City, will be affected by the lockdown, which would keep most residents at home except for necessary trips such as buying food or medicine.

Elementary school students returned to class in New York City on Tuesday in a test of the United States' largest public school system. Children wore masks and had their temperatures checked before entering their respective classrooms. Recent testing in the US' largest city showed more than 3% tested positive for the virus, the highest proportion in months.

The Walt Disney Company said it would lay off about 28,000 employees. The job losses stem from its flagship park in the US state of California, Disneyland, which has remained closed since March. About two-thirds of the employees who will lose their positions are part-time workers, the company said in a statement.

Colombia: Colombia will keep its land and sea borders closed until November 1.

Recurring epidemics: The entire Americas region will likely experience waves of epidemics and outbreaks of COVID-19, interspersed with lower transmission periods for the next two years, according to the Pan American Health Organization (PAHO).

Israel's parliament has passed a bill that would allow the government to stymie protests during a lockdown, a measure that has provoked unrest in recent days. The legislation allows the government to declare a week-long state of emergency if the coronavirus spreads out of control. If such a state is called, the government would be able to limit group participation, including protests, to 1 kilometer (0.6 miles) from a person's home. Previously, hundreds of Israelis had protested against the measure, blocking streets surrounding the parliament, and demonstrating outside Prime Minister Benjamin Netanyahu's official residence.

Israel also reported that more than 25% of ultra-Orthodox Israelis are testing positive. About 12% of the country's nine million citizens are ultra-Orthodox Jews.

More than 2 million South Africans lost their jobs due to the coronavirus so far. The national statistics office said 2.2 million jobs were lost in the second quarter after the country imposed a strict lockdown on March 27, which pushed the country further into recession. All major sectors that the national statistics office looks at cut jobs during the second quarter.

South Africa announced it will reopen its borders to all African countries from Thursday, but will still bar tourists from around 50 nations with high infection rates, including Britain, the US, India, Russia and France.

The International Air Transport Association (IATA), the trade association of the world's airlines, has warned that there will be even fewer flights around the world now with coronavirus cases surging. The IATA warned that flights in the northern hemisphere will now be 66% below the number of flights in 2019. It could cause hundreds of thousands of jobs in the airline industry to disappear and estimated that global traffic would not reach pre-pandemic levels until 2024.

Neanderthal genes: New research shows that people with a certain genetic variation inherited from Neanderthals have a much higher risk factor for contracting severe COVID-19. "The probability that humans who inherited this gene variation have to be put on a ventilator when they contract the novel coronavirus Sars-CoV-2 is three times higher," said Hugo Zeberg, an evolutionary anthropologist at Germany's Max Planck Institute. The variation appears in the genome of almost half of people in South Asia, particularly in Bangladesh. Just 16% of people in Europe have the variation, while in Africa and East Asia, it is almost non-existent.