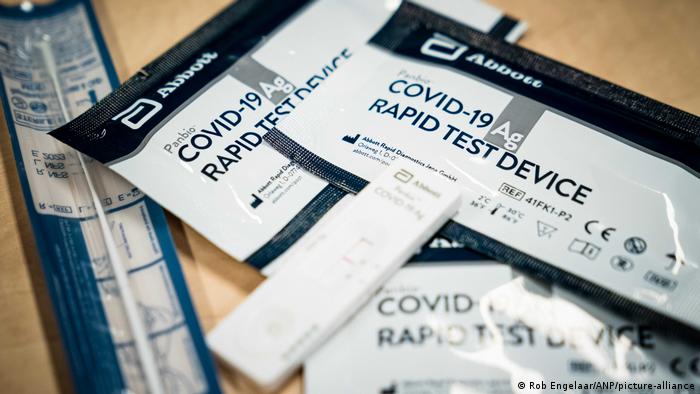 "Today, I am in a position to announce another €100 million that we have earmarked as special funds for Gavi," she said through a translator, referring to the vaccine alliance.

"This is Germany's contribution towards ensuring that developing countries have access to COVID-19 vaccines," Merkel added. She said the pandemic must be tackled on a global level and called on countries to get involved in the program.

How do you create a coronavirus vaccine?

COVID-19 Special: How do you create a coronavirus vaccine?

Guterres said the Access to COVID-19 Tools (ACT) Accelerator program and its COVAX facility had already received €3 billion but needs another €35 billion for full funding. The program aims to deliver 2 billion doses of COVID-19, 245 million treatments and 500 million tests to developing countries by the end of next year.

"The ACT-Accelerator provides the only safe and certain way to reopen the global economy as quickly as possible. A national vaccine effort in a handful of countries will not unlock the doors to the global economy and restore livelihoods," Guterres told a high-level virtual UN event.

"The $3 billion it has received has been critical for the start-up," he told the event. "Now we need to scale-up and ensure maximum impact — and that requires an additional $35 billion. That must begin with an immediate infusion of $15 billion."

"These resources are crucial now to avoid losing the window of opportunity for advance purchase and production, to build stocks in parallel with licensing, to boost research, and to help countries prepare to optimize the new vaccines when they arrive," Guterres said.

Billionaire philanthropist Bill Gates addressed the summit, announcing that his foundation had signed a new agreement with 16 biotech firms to expand global access to vaccines, therapeutics and diagnostics. He said the world was on the brink of a "great scientific achievement" in the form of a vaccine, but that low- and middle-income countries were only on track to cover just 14% of their populations with a COVID-19 vaccine.

Coronavirus vaccination: What are we actually waiting for?

Fast, faster, fastest: Developing an effective SARS-CoV-2 vaccine in record time — is it possible? And will it be the full answer to the pandemic? DW asked an expert a few basic questions about what we can expect.

COVID-19 vaccine: From the lab to your doorstep

The vaccines would be making a tedious journey, passing through some of the coldest temperatures on Earth, before arriving at a clinic near you. Delivery firms are making sure the trip goes without a hitch.

Brexit: UK to restart trade talks with EU after threatening to quit 2h ago