UN General Assembly: 'The world must wake up' – as it happened

The US and China came out in favor of dialogue and diplomacy as Turkey announced it would sign the Paris Agreement. South Korea called for US talks with the North. DW summarizes key moments from the UN General Assembly. 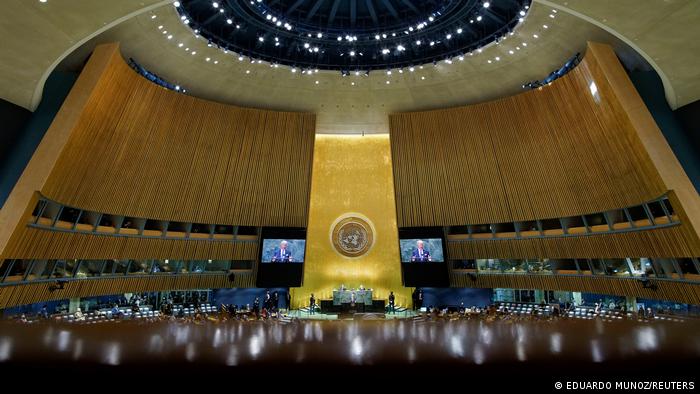 Climate change, coronavirus and multilateralism have headlined the 76th Session of the UN General Assembly

These live updates are now closed.

The UN said it had released $45 million (€38.4 million) in emergency funds to help prevent Afghanistan's healthcare system from collapsing.

Martin Griffiths, the UN's Under-Secretary-General for Humanitarian Affairs and Emergency Relief Coordinator, said in a statement that "medicines, medical supplies and fuel are running out in Afghanistan," before adding, "essential health-care workers are not being paid."

The country's healthcare system has been in crisis since the Taliban swept into power last month, complicating aid deliveries and leaving many health facilities understaffed.

Contrary to a report in Britain's Daily Telegraph newspaper on Wednesday, France said it has no plans to relinquish its permanent seat on the United Nations Security Council in exchange for the creation of a European army.

"No, France has not offered to leave its seat on the United Nations Security Council. It belongs to France and it will remain so," the office of President Emmanuel Macron said.

US President Joe Biden's call for "relentless diplomacy" would be seen skeptically by US allies in Europe even if the submarine crisis has not erupted right before the General Assembly as US relations with many countries are still tense following the US withdrew troops from Afghanistan, according to DW correspondent Teri Schultz.

"We cannot overemphasize the impact that the evacuation debacle had on the trust that allies and partners are putting in the United States right now," she said. "President Biden's speech may have run better earlier in his presidency than it does today."

With US relations to both Russia and China, Biden will continue to need European allies in the coming years of his presidency, Schultz added.

NATO Secretary-General Jens Stoltenberg told AP news that its members needed to focus "on the big picture" during an interview on the sidelines of the UN General Assembly.

Stoltenberg did not want to take sides in the French submarine deal cancellation.

Instead, he urged the defensive treaty's members to "stand together and to continue to modernize and adapt NATO" to new problems.

Stoltenberg said a proposal to create a European standby force of about 5,000 troops should not be "something that happens outside NATO."

"Any attempt to weaken the trans-Atlantic bond between Europe and North America will not only weaken NATO, it will divide Europe," he said. "We have one set of forces, and we have to make the most available for NATO."

He said that while the organization would continue to fight terrorism it would need to "think through carefully the targets, the goals" of each mission.

"The more we're able to stabilize countries without deploying thousands of troops in combat missions, the better," added Stoltenberg.

A meeting of top diplomats from France, Germany, Britain and the US planned for Wednesday fell through due to an ongoing difference of opinion over a new US-UK-Australian security pact.

The meeting, set to take place on the sidelines of the UN General Assembly, was one of three planned get-togethers between US Secretary of State Antony Blinken and French Foreign Minister Jean-Yves Le Drian.

Le Drian responded by accusing US President Joe Biden's administration of "unilateralism, unpredictability, brutality and not respecting your partner."

Although the US State Department claimed the reason for the meeting cancellation was scheduling issues, German Foreign Minister Heiko Maas said it was due to "disgruntlement on the French side."

Maas said he "can understand" the French reaction and that "some things... need to be straightened out before we can sit together in this format."

He added: "That decision and the way it came about is vexing. And it is sobering not only for France."

France has been looking for explanations for the way the US and the UK left the western European country out of a submarine deal with Australia. 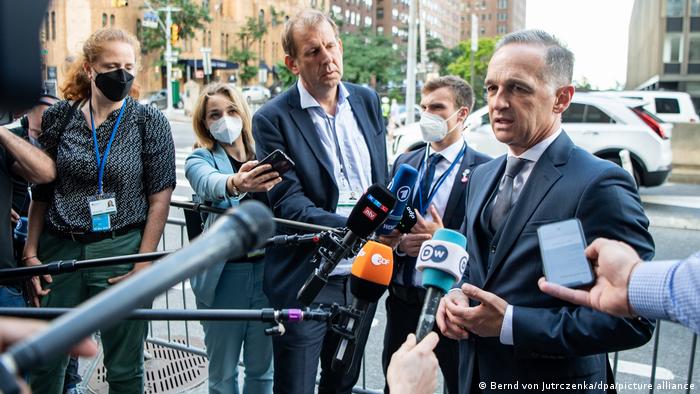 Queiroga was part of a delegation led by the country's president, Jair Bolsonaro.

The president, an unvaccinated COVID-19 skeptic who was infected by the virus in July 2020, told world leaders and delegates that all Brazilians who wanted to be inoculated would be able to do so by November.

The health minister, who said he wore a mask while at the meeting, will now stay in quarantine in New York. "The minister is doing well," said a Brazilian government statement.

As most of the Brazilian delegation is not vaccinated they were not allowed to eat in New York restaurants and instead forced to eat pizza on the sidewalk, according to Reuters news agency.

The ruling emir of Qatar, Sheikh Tamim bin Hamad Al Thani, spoke of "the necessity of continuing dialogue with the Taliban" in his UN General Assembly address.

"Boycott only leads to polarization and reactions, whereas dialogue could bring in positive results," said the emir of the new Afghanistan rulers.

Qatar helped out in talks with the Taliban during the insurgents' quick reconquest of Afghanistan after US-led troops pulled out last summer.

Hamad Al Thani also called for a return to Iran nuclear talks and an end to Israeli attacks on the Palestinian people.

John Kerry, the US climate envoy and former secretary of state, told DW's Richard Walker that he was "absolutely delighted" at China's decision not to build coal-fired power plants.

Taliban try to speak at meeting

In a surprise move, the Taliban have asked to address the UN General Assembly, UN spokesman Stephane Dujarric confirmed on Tuesday.

The US said it was aware of the request, but that the UN credentials committee "would take some time to deliberate," suggesting the Taliban might not be able to speak at this session.

China commits to "dialogue and cooperation"

Chinese leader Xi Jinping said his country was looking to multilateralism to solve the current global disputes with "dialogue and cooperation" after coming under increased pressure from the US.

In a prerecorded message, Xi said: "We need to pursue dialogue and inclusiveness over confrontation and exclusion."

Xi renewed his commitment to climate change to help the world meet the goals of the Paris Agreement.

"China will step up support for other developing countries in developing green and low-carbon energy, and will not build new coal-fired power projects abroad," Xi said.

"The world is big enough to accommodate common development and progress of all countries," he added, saying China would donate 2 billion vaccine shots to poor countries by the end of the year.

After scientists attributed intense wildfires and floods across Turkey to climate change, he said he would soon put the vote to Turkish parliament.

"Before the United Nations climate change conference, which will be held in Glasgow, we envisage the ratification phase of the carbon-neutral targeted agreement," said Erdogan.

South Korean President Moon Jae-In called for a "speedy resumption" of negotiations between the United States and North Korea.

A week after Pyongyang violated UN Security Council resolutions by firing two ballistic missiles, Moon said he hoped to see "the power of dialogue and cooperation in fostering peace."

US opens "era of relentless diplomacy"

US President Joe Biden said the world had to face up to the COVID-19 pandemic, climate change and human rights abuses in his first address to the UN General Assembly on Tuesday.

He asked countries to work on their cooperation based on "our common humanity," and move away from solving issues by what he called "bombs and bullets."

After comments by UN Secretary-General Antonio Guterres, Biden said the US was "not seeking a new Cold War" but still promised to "stand up for our allies."

"We're opening a new era of relentless diplomacy, of using the power of our development aid to invest in new ways of lifting people up around the world," the US president said.

Regarding the criticism the recent diplomatic blow-up with France over the submarine deal with Australia, he said relations with the French were "great."

Biden backed the UN's role in this process, resolving to increase funding to $11.4 billion (€9.7 billion).

In what Biden called "a decisive decade," he promised double climate aid and spend $10 billion on reducing hunger globally.

"We will choose to build a better future. We, you and I, we have the will and capacity to make it better. Ladies and gentlemen, we cannot afford to waste any more time," he said. "We can do this."

United Nations Secretary-General Antonio Guterres hit out at billionaires such as Richard Branson and Jeff Bezos who flew to space among current global problems.

In his opening speech, Guterres said the gap between rich and poor was highlighted with "billionaires joyriding to space while millions go hungry on Earth."

Guterres: 'We passed the science test, but we are getting an F in ethics'

He added that the world faces an "even bleaker" future with more hopelessness, corruption and curtailing of personal freedoms.

"We are on the edge of an abyss — and moving in the wrong direction," Guterres said. "I'm here to sound the alarm. The world must wake up."

Biden: 'We are not seeking a new cold war'