"A very happy group of people in this capsule," Bezos said after touching down. The crew gave each other high-fives and hugged friends and family.

Bezos went on a 11-minute trip to the edge of space, just beyond the Earth's limits, with a crew of four from a desert site in West Texas. The flight also coincided with the 52nd anniversary of the first Moon landing.

Their capsule landed in the Texan desert, after coming back down to Earth with the help of giant parachutes.

Former German astronaut: Decreasing cost of getting materials to space 'would be a big step forward'

Just over a week ago, Branson launched his first successful suborbital flight from New Mexico through his competing space tourism company Virgin Galactic. Bezos' Blue Origin is due to fly higher than Branson, with a distance of 62 miles (100 kilometers) compared to 53 miles for Virgin Galactic.

Tuesday's crew includes Bezos, along with his brother Mark, female aviation pioneer Wally Funk and Oliver Daemen, an 18-year-old Dutchman and last-minute fill-in for the winner of a $28 million (€23.8 million) charity auction.

Funk, who is 82, and Daemen became the oldest and youngest people to reach space. Funk was one of the so-called Mercury 13 group of women who trained to become NASA astronauts in the early 1960s, but was not able to participate due to her gender. 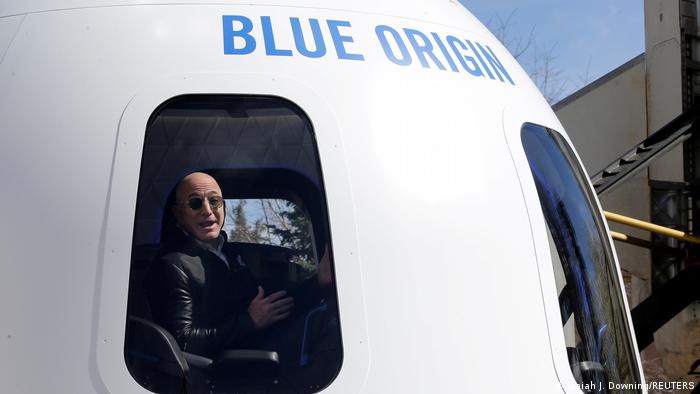 The Blue Shepard is a fully autonomous rocket-and-capsule combination

"I am excited, but not anxious. We'll see how I feel when I'm strapped into my seat," Bezos said in an interview with Fox Business Network on Monday. "We're ready. The vehicle's ready. This team is amazing. I feel very good about it. And I think my fellow crewmates feel good about it, too."

Bezos, 57, founded Blue Origin in 2000 with the goal of one day building floating space colonies with artificial gravity where millions of people will work and live."

Bezos has come under criticism after he said thanks to the people who made his trip into space possible.

"I want to thank every Amazon employee, and every Amazon customer because you guys paid for all this," Bezos told a news conference.

The billionaire has long faced a backlash within the Amazon workforce who accuse the company of poor and unsafe working conditions. Amazon has also been accused of relying too much on rigid productivity metrics and not offering hourly employees enough break times.

"Amazon workers don't need Bezos to thank them. They need him to stop union busting — and pay them what they deserve," Reich said on Twitter.

Tourism is not what 'many of us hoped space would become'

DW spoke with Mark McCoughrean, a senior adviser for science and exploration at the European Space Agency about the historic importance of Bezos' trip.

McCoughrean said it was "an interesting day" rather than a historic moment, although acknowledging the importance "for the science community and the space community to see Wally Funk, you know, almost 50 years after she was in the Mercury 13 program and passed over because she was a woman finally making it across that boundary."

ESA official: Millionaire space race is 'very different to what many of us hoped'

"We're seeing two of the richest men in the world having a bit of a contest to go and do these flights. And I think that's something very different to what perhaps many of us hoped space would become over the last 50 years," McCoughrean said.

More space travel in the works

Today, the firm is developing a heavy-lift orbital rocket called New Glenn, along with a Moon lander that it hopes to contract to NASA. New Shepard has flown 15 uncrewed flights to test it for safety mechanisms.

The rocket lifted off at 8.12 a.m. Central Time (1312 UTC), following a short delay, from a remote facility called Launch Site One, about 25 miles north of the nearest town, Van Horn.

New Shepard is 60 feet (18.3 meters) tall, and a fully autonomous rocket-and-capsule combination that cannot be piloted from inside the spacecraft. It is completely computer-flown, meaning that none of Blue Origin's staff astronauts or trained personnel were on board.

Blue Origin has not offered details on its longer-term pricing strategy or how quickly it will ramp up the frequency of its launches. The company says it plans to host two more flights this year, and "many more" next year.

Space tourism race blasts off in a big way