Commercial space cowboys reach for the stars | World | Breaking news and perspectives from around the globe | DW | 19.07.2021

If you've run out of ideas of where to go on holiday and want to take it to the next level, space tourism could be your thing — if you have the money to spare. Here's a look at some of the pros and cons. 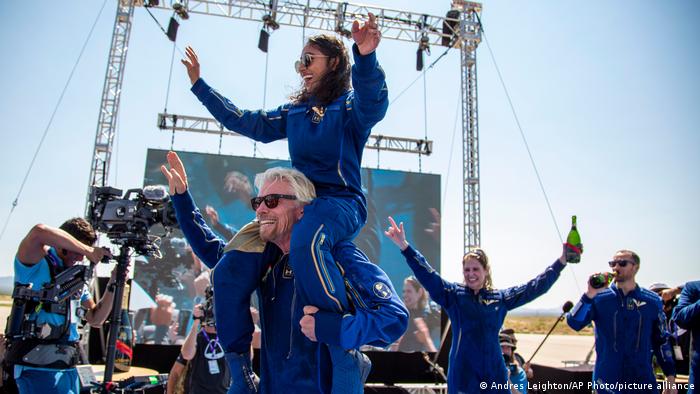 In the wake of NASA's Apollo and space shuttle missions, it seemed that the halcyon days of space exploration had had their run. Interest waned and many people no longer saw the point.

More recently, however, interest has been piqued again, not least by the myriad of international missions to Mars.

The latest craze is commercial space tourism as offered by several private spaceflight companies. The three leading contenders are currently showing the world who has the biggest, er, rocket to take themselves and anyone who has enough spare change into space.

British entrepreneur Richard Branson, the founder of Virgin Galactic, beat fellow billionaire Jeff Bezos into space when he and five crew members successfully launched into suborbital space — defined as reaching outer space but with a trajectory that does not take it into orbit — last Sunday, arriving at an altitude of 80 kilometers (50 miles), which is the boundary of outer space as recognized by the United States.

Next in line is Bezos, who plans to embark on his own space adventure on Tuesday aboard his Blue Origin LLC's rocket. The winning bidder, a private individual who had planned to join Bezos, his brother Mark and an unnamed astronaut, paid more than $28 million for the 11-minute ride. But the bidder backed out at the last minute last Thursday, and will be replaced by the 18-year-old son of another bidder instead. 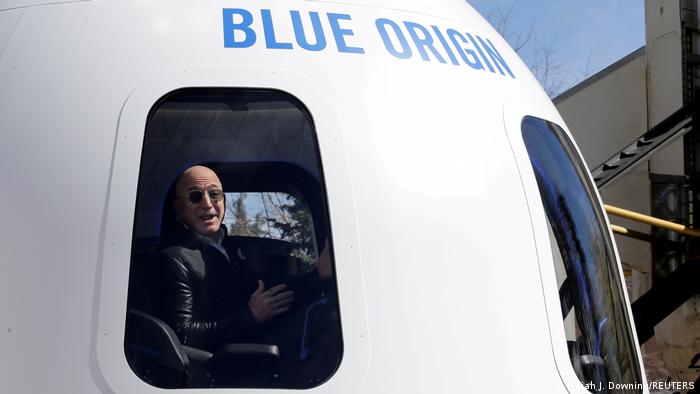 And then there's Elon Musk, whose SpaceX company has signed a deal with Houston-based space tourism company Axiom to send three private citizens and a former NASA astronaut into space. Axiom passengers will pay $55 million for the flight and a stay on the International Space Station in early 2022.

What is the environmental impact of space tourism?

Though these billionaires are at the forefront of the current space tourism boom, they're by no means the first to embark on a commercial space adventure. Twenty years ago, on April 28, 2001, Dennis Tito, an American engineer, paid a massive $20 million for a seat on a Russian Soyuz rocket, becoming the first civilian to visit the International Space Station.

It comes as no surprise that space tourism has polarized public opinion.

Aside from health issues such as exposure to harmful radiation from the sun, one of the criticisms cited regularly is the impact that launching rockets into space has on the environment.

"The aspect that has been most focused on is depletion of ozone in the protective stratospheric ozone layer. The advantage, at least with the Virgin Galactic and Blue Origin rockets, is that they don't have chlorine, but they do have other components that can produce nitrogen oxides. And when that's released into the stratosphere, that can contribute to ozone depletion," Eloise Marais, an associate professor in physical geography at the University College London who's working on a study on pollutant emissions from rocket launches, told DW.

In terms of next week's Blue Origin launch, the BE-3 engine used in the New Shepard propulsion rocket will be using liquid hydrogen and liquid oxygen. "Both will have an impact. Hydrogen and oxygen can produce water and water released into the dry stratosphere can influence the climate," Marais said.

Carbon dioxide emissions are also a concern, as that is the most long-lasting greenhouse gas causing climate change. Virgin Galactic's VSS Unity space plane uses conventional rocket fuel, and emits CO2 about equivalent to a round-trip trans-Atlantic passenger jet flight. In contrast, Blue Origin's New Shepard rocket uses hydrogen fuel, which does not emit CO2 — although production of that hydrogen fuel likely has.

Space tourism is expected to become grow as a commercial sector and renew interest in space exploration. As a result, there will be more financial backing to support innovation in the industry. Technology developed for space tourism could result in spinoffs, and one day even be applied to other domains beyond space missions.

"We have gotten a lot of products that are safe in a space environment that we copy in a safe way for the benefit of people on Earth," Annette Toivonen, a space tourism lecturer at Helsinki's Haag-Helia University of Applied Sciences and author of Sustainable Space Tourism: An Introduction, told DW.

Manufacturing new and better spacecraft will also create job opportunities. In early 2021, NASA announced that it was offering $45 million in support to about 350 small businesses and research institutions to develop cutting-edge technologies.

"That's the good side, when we have three rich men using their own funds for these developments, and that it's not coming from the taxpayer," Toivonen said. "Private individuals are willing to use their money for these kinds of developments and technological innovations."

Some of those technological innovations might also pave the way to find more sustainable fuel sources that could benefit other industries. "Now, there's a lot of money for trying to create alternatives for fossil fuels. Then they might discover some kind of hydrogen fuel system that could be copied for airplanes," said Toivonen.

Space tourism is becoming a booming industry. In a report last year, Swiss investment bank UBS estimated that suborbital and orbital space tourism could have a market value of $3 billion by 2030.

Space tourism is here to stay

One question that pops up regularly is whether the space outside the Earth is meant for humans.

"There is a big ethical issue there. We have destroyed our planet; and then we go to space and destroy that as well. Legislation is completely lacking. It looks like the Wild West at the moment," Toivonen said.

Whatever your take is, the commercial race to space is in full flight.

If strapping in on a rocket isn't your thing, the spaceflight company Space Perspective is planning to take passengers to the edge of space in a high-tech version of a hydrogen-powered hot air balloon "the size of a football stadium." The first flights are planned for early 2024, with tickets priced at a more affordable $125,000 per person.

And, if you're planning a different type of holiday, the company Orbital Assembly Corporation plans to open a luxury space hotel in 2027. The Voyager Station features a restaurant, gym and Earth-viewing bars. A 3-1/2 day stay will set you back only $5 million.

Space tourism race blasts off in a big way