Opinion: How real is the threat of Taliban infighting?

The Afghan Taliban will be under major stress in the coming weeks and months as they focus on the challenges of governance. Such pressure could generate fresh internal tensions, analyst Michael Kugelman writes. 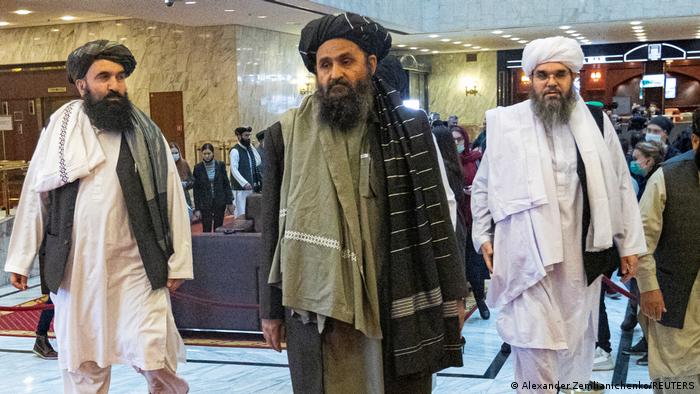 In the past, the Taliban successfully overcame their internal rifts

In recent days, reports have abounded of disputes within the Taliban, purportedly fueled by the formation of a hard-line, noninclusive interim government disdained by the group's moderate factions because of its lack of non-Taliban leaders and ethnic minorities.

Haqqani reportedly rose from his chair and punched Baradar. Their bodyguards brawled, leading to several deaths. Combatants hurled "furniture and large thermos flasks full of hot green tea." The scene, as described in these reports, resembles a mix between a militant melee and an episode of The Jerry Springer Show.

If reports of internal tensions are accurate, such strains could well intensify in the coming weeks, with the Taliban under great stress as it tries to consolidate power, gain domestic and international legitimacy, tackle an ever-worsening economic crisis, and fend off a terrorist threat posed by its Islamic State Khorasan (IS-K) rival.

Talk of Taliban fracturing, however, shouldn't be overstated. We lack definitive proof about the alleged squabbling. Caution is also in order because, in the past, when the group confronted dissent within its ranks, it acted brutally to squelch it before it could become a serious threat.

Additionally, internal tensions haven't prevented the Taliban from achieving just about everything that the group has set out to do over the past 20 years.

Writing in 2019, Afghanistan expert Andrew Watkins noted that "every instance of dissent and disunity in the last decade that the Taliban perceived as a threat was harshly, even brutally suppressed." He also stated that internal rifts had declined since Mullah Akhundzada, the group's current supreme leader, assumed power in 2016.

Indeed, there are strong indications of unity within both the military and political ranks of the Taliban. Over the last few years, when the Taliban has announced several brief truces, fighters have laid down their arms, with no violators. Additionally, when the Taliban pledged to launch negotiations with the Trump administration and then (for a short-lived period) with the Afghan government, there were no known expressions of dissent from hardliners opposed to negotiations.

Even if one assumes that there has been some Taliban infighting, it certainly didn't weaken the organization. Over the years, the Taliban has ramped up offensives, turned a localized insurgency into a nationwide assault, seized unprecedented amounts of territory, and secured a troop withdrawal deal with the United States that required it to do little in return. It then entered Kabul with not a single bullet fired, watched its arch-nemesis Ashraf Ghani flee the country, seized political power, said farewell to the last of the departing US troops, and announced an interim government that features the group's most powerful and feared leaders.

New disagreements could emerge about how to respond to nonviolent protests against Taliban rule, over whether non-Taliban officials should be brought into the government, and over what is the best way to address the economic crisis.

If past is precedent, such differences will be nipped in the bud before they can cause major cleavages in the organization. But then again, the Taliban will face more complex challenges leading a government than waging an insurgency. This means internal disputes won't be as easy to solve as they used to be.

Additionally, there's an oft-overlooked potential manifestation of dissent to speak of — and one that could have the most damaging possible consequences of any internal divisions with the group: Taliban fighters leaving the organization and throwing in their lot with their IS-K rival.

Some Taliban fighters have expressed disappointment that the war is over, and that they won't be able to continue their battlefield jihad. Many will struggle to transition to civilian life, and to secure a new livelihood — especially with the economic crisis. There will be boredom and frustration.

In the past, many disaffected Taliban fighters have thrown their allegiances to IS-K, a group comprised mainly of former Afghan and Pakistani Taliban members. There could be fresh waves of defections in the coming months.

This is nothing to sneeze at, because IS-K arguably poses the biggest current security threat to the Taliban. The horrific attack near the Kabul airport on August 26 was likely the opening salvo of a new IS-K campaign to undermine the Taliban as they work to consolidate power. A recent rash of attacks on Taliban convoys in Nangarhar, a province where IS-K has suffered major losses after maintaining a bastion there for several years, attests to the group's resilience and danger.

IS-K, an organization with fewer fighters than the Taliban and little occupied territory, doesn't pose a direct threat to the Taliban's political survival. But its campaign of violence could hamper the Taliban's efforts to consolidate power and gain domestic legitimacy.

One of the Taliban's main messages to the Afghan population is that it has restored peace after more than 40 years of war. But that achievement — and the legitimacy the Taliban seeks to gain from it — will be undermined if Afghans are convulsed by new surges of terrorist violence.

There's been plenty of talk about tensions between leaders of different Taliban factions. But it's the Taliban foot soldiers — restless and frustrated about the end of a war they'd rather keep fighting — that could best exemplify dissent within the Taliban, and the troubling implications that could spring from it.

Michael Kugelman is the Deputy Director and Senior Associate for South Asia at the Washington-based Woodrow Wilson International Center for Scholars.