A president who calls his supporters out to the streets on the national holiday and indirectly threatens to stage a military coup should face impeachment proceedings, writes says DW's Philipp Lichterbeck. 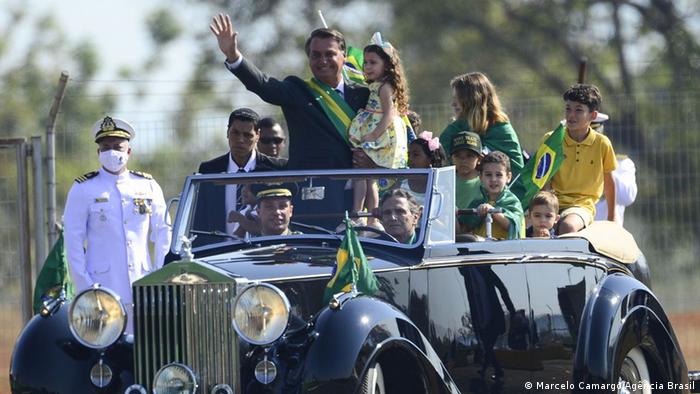 Jair Bolsonaro stopped governing a while back. In three years, his government has inaugurated a few local infrastructure projects and liberalized gun laws, which has led to a sharp increase in arms sales in a country that is already notoriously violent. Apart from that, Brazil's president has promoted the ongoing destruction of the Amazon rainforest and mismanaged the COVID-19 pandemic that has killed almost 600,000 people in the country so far.

Under his watch, society has become even more polarized and the country has witnessed the worst attacks on democracy since the 1988 constitution came into effect.

What's left to do for someone who has nothing but disasters to show for his work? Someone whose poll ratings have plummeted because people are seeing poverty spread and prices increase? For Bolsonaro, the tactic is to find excuses, to blame others, to search for distractions and to lie.

There is no other way of interpreting the mass rallies that took place on Brazil's recent Independence Day. He indicated that Brazilians could decide what they felt about him and his government by turning out en masse, and he even made indirect threats to stage a putsch.

He said if enough people turned up, it would be a clear indication that he had the support of the people. He also claimed that this would be a vote of no confidence in the Supreme Court, with which he is in a locked battle. He would have a mandate from the people to close down the court, and also Congress, he stated.

Brazil in the grip of collective delirium

Bolsonaro thus put Brazil to the test for egomaniacal reasons. The fact that thousands of Brazilians should take to the street to call for a putsch on this day of all days is darkly ironic. It is a sign of the collective delirium that has Brazil in its grip.

For the president, the whole circus was largely about image. He called the rallies to show how much support he allegedly enjoys and so he could use the pictures of him amid thousands of fans to argue that the negative polls are wrong and that if he loses next year's elections, it will be down to fraud.

Bolsonarism clearly has a distorted understanding of democracy, instead of a balance of three powers, the movement sees the president's autocracy as superior to the legislature and the judiciary.

On Independence Day, Bolsonaro himself threatened the chief justices and told them that they had to play according to the rules of the constitution or else there would be consequences. Though, of course, he is the one who keeps breaking the rules. It is not up to him to issue ultimatums to other constitutional bodies. On the contrary: The president should be kept in check by the judiciary and parliament. Therefore, at this point, impeachment proceedings ought to be initiated against Bolsonaro.

Followers of Bolsonarism are fanatical

It is difficult to assess how strong Bolsonarism still is in Brazil, but what is certain is that its followers are fanatical. As if murmuring a prayer, they constantly say that they stand for god, the nation and the family (as well as against communism, wherever it might be hiding). They repeated this trinity on Independence Day as well: God, nation, family. But these are not political projects; they are open concepts. Brazil's tragedy is that they have been hijacked by Bolsonarism, which has appropriated them to divide society.

Thus, the president can divert attention from his dismal record and pursue his real goal: To maintain power and protect himself from prosecution. Let us not forget that what triggered his anger was the Supreme Court's actions against politicians and YouTubers sympathetic to him who had incited violence. The judiciary is also investigating his sons for long-term corruption. The evidence against them is staggering and Bolsonaro himself is likely to be targeted by prosecutors at some stage.

Brazil's president has literally declared himself to be the country's godsent savior. It is no wonder that a man capable of such delusions could have instrumentalized the country's Independence Day for his own personal advantage.

Brazil can only hope that Bolsonaro doesn't continue to wreak more havoc during the rest of his term or that he is soon deposed.

A comeback to politics for Brazil's Lula?