Biden called for greater cooperation on climate change, global conflict and the coronavirus pandemic. Meanwhile, UN chief Antonio Guterres warned of a rising "sense of impunity" in governments across the world. 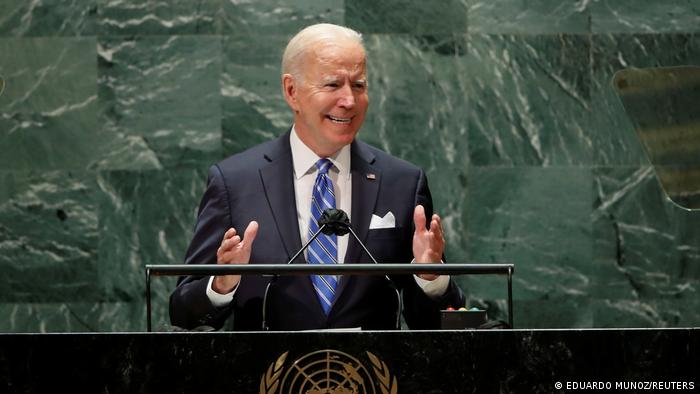 The United Nations General Assembly in New York opened for in-person debate for the first time in nearly two years on Tuesday, with US President Joe Biden warning of a "decisive decade."

"Our shared grief is a poignant reminder that our collective future will hinge on our ability to recognize our common humanity and to act together," he said. "This is the clear and urgent choice that we face here at the dawning of what will be a decisive decade for our world, a decade that will quite literally determine our futures."

He also called on nations to take the necessary steps to prevent the next pandemic. "Or will we fail to harness the tools at our disposal as more virulent variants take hold?" he said.

Biden: 'We are not seeking a new cold war'

He also warned of the threat of climate change, and called for action, citing the "merciless march of ever-worsening droughts and floods, more intense fires and hurricanes, longer heatwaves and rising seas."

"Whether we choose to fight for our shared futures or not will reverberate in generations yet to come," he said. "The scientists and experts are telling us that we are fast approaching the point of no return in a literal sense."

Biden also lauded the withdrawal of US forces, saying that his administration is closing "a period of relentless war."

"We ended 20 years of conflict in Afghanistan," he said. "We're opening a new era of relentless diplomacy, of using the power of our development aid to invest in new ways of lifting people up around the world."

Biden: 'We must work together as never before'

Opening the session ahead of Biden's speech, UN Secretary-General Antonio Guterres warned that "a sense of impunity is taking hold" across the world.

"We are seeing an explosion in seizures of power by force. Military coups are back. and the lack of unity among the international community doesn't help."

"We need to strengthen global governance. We need to focus on the future. We need to renew the social contract. And we need to ensure the UN is fit for a new era."

Guterres: 'We passed the science test, but we are getting an F in ethics'

Guterres also hinted at tensions between the US and China, saying that a new global rivalry would be "far less predictable than the Cold War."

"At the same time, it will be impossible to address dramatic economic and development challenges, while the world's two largest economies are at odds with each other," he said, adding that he believes that the world is moving towards "two divergent approaches" in economic, military and geopolitical strategies. "This is a recipe for a trouble."

Brazilian President Jair Bolsonaro spoke ahead of Biden, while Chinese President Xi Jinping who is set to deliver a video address.

The ongoing COVID-19 pandemic and the conflict in Afghanistan will be the top two priorities for the sessions, which runs until Monday. More than 100 heads of state and diplomats are also set to discuss the humanitarian crises in Yemen and Ethiopia's Tigray region. This is the first time that the delegates are meeting face-to-face since the coronavirus pandemic took hold.

Several high-profile meetings are being held on the sidelines of the event. This includes a pandemic response summit hosted by President Biden and an EU Foreign Ministers' meeting to address the diplomatic crisis between France, the US, and Australia.