According to Doha, over 230 Afghan, US and European nationals were aboard the Qatari flight, the fourth to evacuate citizens since the end of the US mission in Afghanistan. 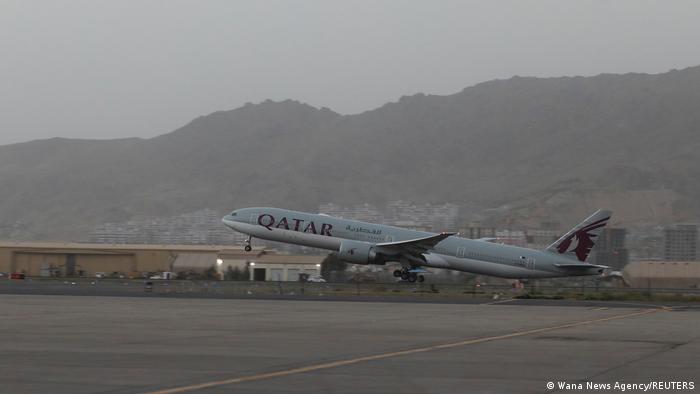 The Qatar Airways flight departed from Kabul Sunday afternoon, according to Doha

A chartered flight carrying over 230 civilians from Taliban-controlled Kabul to Doha took off Sunday, a Qatari Foreign Ministry official said.

It was the fourth Qatari flight to evacuate citizens out of Afghanistan since Western forces finalized their massive airlift following the Taliban takeover.

Reuters news agency quoted another Qatari official as saying there were 236 passengers aboard, making it the largest evacuation flight since the US troop withdrawal last month.

"Qatar will continue its collaboration with international partners on efforts that ensure freedom of movement in Afghanistan, while working with various parties on the ground towards more general progress in the country moving forward," the second official told Reuters.

Between August 14 and August 30, the US withdrew about 6,000 of its nationals and another 124,000 civilians, with officials estimating around 100 Americans were still in Kabul.

Since then, hundreds of people have been evacuated on the four Qatar Airways flights.

A total of 36 US citizens have left Afghanistan after Washington withdrew its forces from Afghanistan, US State Department spokeswoman Jalina Porter said on Friday.

Qatar has emerged as a key player in efforts to evacuate citizens from Afghanistan after the Taliban seized power.

The Gulf state, which has been a close US ally, has maintained ties with the Taliban for years. Doha houses a political office of the fundamentalist militants, as well as the largest US military base in the Middle East.

Germany evacuated only fraction of those promised, activist says