Reassurances do not prevent priorities from diverging at Munich Security Conference | News | DW | 18.02.2017

As the US sought to affirm its commitment to trans-Atlantic relations, Europeans felt it was time to back those words with action. The focus shifted from defense spending to the prospect of a "European way" of security. 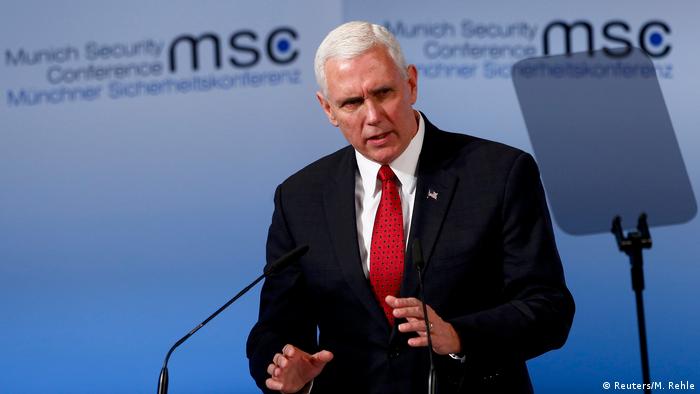 Amid discussions of growing threats and the United States' role at the international level, the Munich Security Conference's second day marked a shift, even if only a hesitant one.

US Vice President Mike Pence sought to reassure conference attendees of Washington's commitment to global stability after German Chancellor Angela Merkel lauded the merits of multilateralism, a sentiment expressed afterwards by many of her European colleagues.

Although Pence's speech attempted to soothe European concerns about the US vision for transatlantic relations, the feeling on the ground was that the time had come for Washington to back its words with actions. Anxieties may have been calmed, but more still needs to be done.

Meanwhile, in an argument that appeared to counteract other officials' remarks, Russian Foreign Minister Sergey Lavrov said international relations needed to go forward in cooperation with other countries, albeit with respect to national interest.

"At the international level, we should go forward without lies. Let it be a post-fake era," Lavrov said, in an apparent reference to so-called "fake news" and accusations of Moscow's links to disinformation campaigns in Western democracies.

The question of defense spending reached a fever pitch as European officials and lawmakers emphasized the various perspectives as to how this could be viewed.

"Europeans cannot demand that the US commit more to Europe if they are not willing to commit themselves," said NATO Secretary-General Jens Stoltenberg. "The post-war generation rose to their challenge; now we must rise to ours."

However, other European officials brought different points of view to the debate on defense spending.

German Foreign Minister Sigmar Gabriel said that Berlin would have to spend roughly 25 billion euros ($26.5 billion) in order to meet the two percent goal set by NATO countries in 2014.

"Germany spends 30 to 40 billion euros on supporting refugees because of military interventions years ago that went wrong," Gabriel said. "This should be considered a contribution to stabilization."

Federica Mogherini, the EU's top diplomat, noted that while defense spending was integral to the bloc's security, it did not constitute its only facet.

Investing in education, job growth and good governance is an investment in our security, Mogherini said, emphasizing the need to allocate resources that directly impact citizens at a societal level.

"It is the European way," Mogherini added.

A broader approach to terrorism?

A noticeable gap in the US vice president's speech was Washington's position on Moscow. Although Pence mentioned the need for a cessation of hostilities in eastern Ukraine, he underlined the need to tackle what he considered the greatest threat to the West, namely the "Islamic State" militant group.

"As President Donald Trump has made clear, the US will fight tirelessly to crush these enemies and consign them to the ash heap of history, where they belong," Pence said.

During a ministerial meeting Tuesday, NATO chief Stoltenberg noted the alliance needed to continue the "fight against terrorism" and counter the threats along its southern borders, whether in the Middle East or North Africa.

General Petr Pavel, chairman of the NATO Military Committee, told DW Saturday that the greatest external threat to the defense alliance was "terrorism."

"Externally, the most urgent challenge for NATO is terrorism. We have to deal with terrorism in a more efficient way," Pavel told DW.

"And not only this physical element - that means the destruction of fighting forces in the terrorist groups - but also increasingly addressing the broader scope of terrorism, the feeding grounds and the conditions from which terrorism and extremism arise," he added.