Joe Biden is hardly the free trader Asia is hoping for | Business | Economy and finance news from a German perspective | DW | 13.11.2020 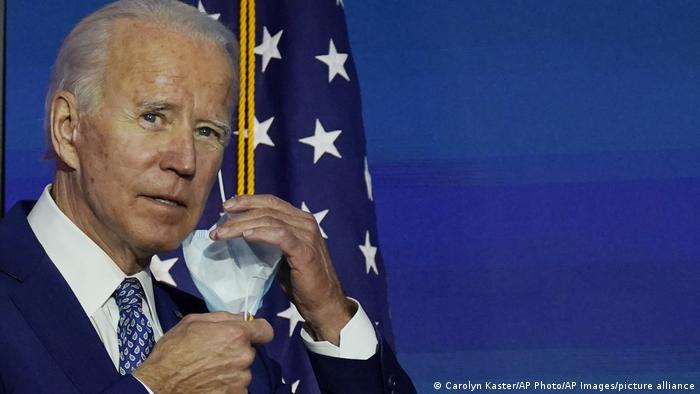 President Donald Trump has upended US trade policy like few of his predecessors, weaponizing tariffs not only to hit back against countries, which he deemed gave their producers an unfair advantage at the cost of US companies but also to score foreign policy gains.

Even traditional allies like the European Union and Japan were not spared by the self-proclaimed tariff man. The past four years have seen Trump slap tariffs on a wide array of European goods from jets to wine and cheese. The automakers from the EU barely survived with the specter of punitive tariffs constantly hanging over them.

But Trump reserved the worst treatment for China, imposing tariffs on nearly three-quarters of everything the US buys from the Asian economic powerhouse from handbags to hydraulic turbines, banning tech champions such as Huawei, and curbing exports to leading Chinese chipmakers on national security grounds.

India wasn't spared tariffs and other punitive measures either despite the apparent bonhomie between Trump and Prime Minister Narendra Modi. Vietnam has been kept on the edge with threats of tariffs after the US-China trade war saw its trade surplus with the US rise.

That's why a Biden win has come as a sigh of relief for Asian economies. They can look forward to a less confrontational and more predictable regime in Washington D.C. that's more likely to engage in talks to iron out differences than unilaterally launch trade wars.

Experts, however, do not expect existing trade policies to change significantly under Biden. The focus is likely to remain on boosting domestic industries as envisaged by Biden's "made in all of America" pledge. The economic crisis brought about by the COVID-19 pandemic that has left millions jobless in the US is only going to push Biden to double down on his promise.

"Biden is by no means a pure 'free trader' as evidenced by his 'Buy American' plan," Shigeto Nagai from Oxford Economics said. " He says he won't negotiate any trade agreements until significant investments in US manufacturing are made."

Biden victory not a big game-changer for China

The president-elect is likely to persist with Trump's tough stance against China, keeping in place the trade barriers erected by him. Biden has been critical of Beijing's trade abuses that he says are hurting US workers.

"I don't think that we're going to go back to the pre-Trump era just because it's not just the Republicans, the Democrats are just as keen to take a much stronger line on China," Gareth Leather, senior Asia economist at Capital Economics, told DW. "There's such a lot of bad blood now between the US and China."

Experts say with COVID-19 still wreaking havoc, reviving trade talks would not be Biden's priority. Even if trade talks were to restart, Biden, unlike Trump, would not roll back the tariffs without any major concessions from China on contentious structural issues such as intellectual property and state aid for industries. In fact, some of China's energy-intensive exports such as steel and aluminum could be charged a carbon fee as part of Biden's ambitious climate policy.

Trump's tech war with China is likely to continue on Biden's watch. The Democrat has supported the ban on Huawei and has expressed concern over TikTok's handling of data.

"The growing rift between China and the US over tech and national security is due to China's emergence as a geostrategic competitor, rather than a consequence of Trump's victory in 2016," Julian Evans-Pritchard, senior China economist at Capital Economics, wrote in a note to clients. "As such, while Mr. Biden will presumably adopt a more rules-based approach, he is unlikely to fundamentally shift course on decoupling."

Biden has vowed to back the Hong Kong Human Rights Bill, signaling that Hong Kong is unlikely to win back its preferential treatment any time soon. Human rights abuses in Xinjiang and political tensions with Taiwan would continue to diminish any chances of a rapprochement. Biden's China policy is also expected to be clouded by the lame-duck Trump administration that has indicated it hasn't finished with its China business just yet.

Trade relations between US and EU to improve under Biden

Biden is expected to rope in traditional allies like the EU and other like-minded countries as part of a multilateral approach to rein in Beijing. This could be problematic for Japan, a traditional US ally, whose economy depends heavily on the Chinese market.

"If Biden manages to promote more cooperation among allies including European nations, Japan may have more difficulty in maintaining economic ties with China," Nagai told DW. "Japan will continue to get pressures from the US to restrict investment and trade involving China in sensitive areas such as technology amid the hegemonic rivalry between the two nations."

Last year, the US and Japan signed a truncated trade deal. The pact, which saw Japan cut tariffs on US beef and pork and the US bring down tariffs on certain industrial goods, left out the more contentious issues such as US tariffs on Japanese cars and market access to US services firms for future talks.

"The next stage of the deal is mainly about services including finance and Japan needs to make lots of concessions to open up domestic markets. At this point, moving to the next stage of the deal is not Biden's priority and will be considered in the context of his decision on whether to return to the table for the renegotiation of the TPP [Trans-Pacific Partnership]," Nagai said.

Evans-Pritchard rules out Biden joining the TPP any time soon, saying "there seems to be little appetite within the Democratic Party for new trade deals." The free trade agreement with the United States and 11 other Pacific Rim countries was a centerpiece of former US President Barack Obama's pivot to Asia, with Biden as one of its cheerleaders. Trump withdrew from the pact within days of his inauguration.

But Biden's reluctance could hurt US efforts to counterbalance China's growing economic clout in the region. China and 14 other countries, including US allies Japan, South Korea and Australia, are expected to sign the Regional Comprehensive Economic Partnership. The free trade deal, the world's largest involving countries with a combined GDP of more than $25 trillion (€21 trillion), could make US companies less competitive in the region.

For India, a Biden presidency would offer some comfort as it would mean a return to traditional ways of raising and addressing even the most contentious trade issues.

India's trade relationship with its largest trade partner has been tensed under Trump, who didn't shy away from punishing New Delhi for its high tariffs and for running a trade surplus with Washington. The US president ended preferential trade treatment for India that allowed a duty exemption on more than $5 billion worth of its goods coming into the United States. Biden is unlikely to restore those privileges.

"President Trump has set the US on a kind of economic nationalism with his two slogans, 'Make America great again' and 'America first.' I think this rhetoric is going to continue to reverberate, especially given his popularity among the voters," said Biswajit Dhar, professor at the Jawaharlal Nehru University in New Delhi. "I don't expect fresh salvos of the kind that we saw in the last four years."

India and the US failed to reach any trade deal during Trump's term over New Delhi's reluctance to further open its economy, especially the politically sensitive dairy industry. Washington also called out New Delhi for putting restrictions on US e-commerce players such as Amazon and Walmart and forcing US credit card companies Mastercard and Visa to locally store data on transactions made in India.

The differences are likely to persist during Biden's tenure.

"The US will be more inward-looking and therefore market access to the US is not going to be that easy," Dhar told DW. "The mood here India is also actually not one of opening up, but more of, strengthening the domestic economy through higher degrees of protection."

The tensions between the US and China would continue to create opportunities for countries like Vietnam, one of the biggest winners of the trade war. Vietnam's exports to the US rose nearly 30% in 2019 as importers sought to circumvent US tariffs on Chinese goods.

Leather says Biden wouldn't be too perturbed by Vietnam's rising trade surplus, unlike the Trump administration, which is probing Vietnam for currency manipulation.

"I suspect that he'll listen to experts a little bit more," he said. "He is not automatically just going to look at the bilateral deficit and see that as evidence that China or Vietnam is cheating. These deficits are determined by a lot more than just what you do with your currency policy."

Leather says Biden could look to roll back the tariffs that were introduced arbitrarily at the start of Trump's presidency on solar panels, washing machines as well as on steel and aluminum, benefiting major producers like Vietnam and Malaysia.