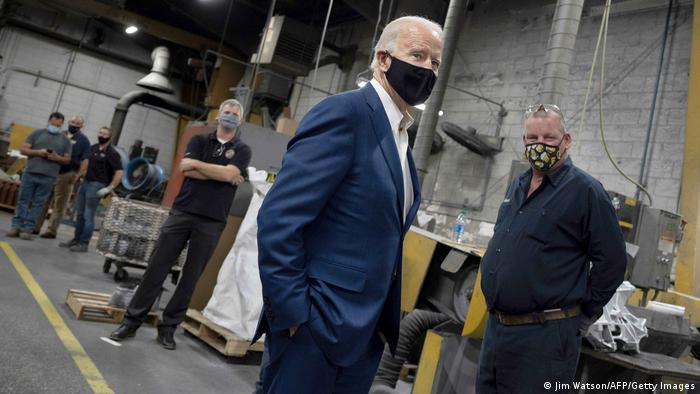 Four years ago, Donald Trump promised working-class Americans the unthinkable: the return of manufacturing jobs that for nearly 100 years had cemented the US as the world's largest economy, but over the past two decades had been lost to the likes of China and Mexico.

Despite questionable success in boosting domestic production in his first term, Trump's protectionist stance deeply resonated with voters, thanks to catchy slogans like "America First" and "Make America Great Again."

It's no surprise, then, that his Democratic rival Joe Biden has pledged to restore US manufacturing hegemony and that more products will be "made in all of America."

Although the coronavirus pandemic would be his administration's first priority, Biden said he wanted to expand the use of Buy American rules to help boost domestic manufacturing and create millions of new production jobs, including a million in the auto sector.

The former vice president's economic plans include a 10% tax on firms who offshore US manufacturing and would eliminate loopholes that help US multinationals to shield their foreign profits from the Internal Revenue Service (IRS). Projects that commit to rebuilding or strengthening domestic manufacturing would benefit from a 10% tax credit.

Mark Zandi, chief economist at Moody's Analytics, told DW that the "carrots and sticks" in Biden's plan could have a meaningful impact on where US firms locate their manufacturing. But winning the White House is one thing — it would also require Democratic control of Congress, he added.

"If the Senate remains under Republican control, it is difficult to see Biden getting much done legislatively, including implementing his 'Made in America' plan," Zandi said.

Other economists see some of Biden's campaign promises as being as dubious as Trump's. After all, US multinationals often move production overseas to benefit from new and untapped markets, like Brazil and China.

"A very high proportion of US-owned manufacturing abroad is producing for sale and use in the country or region where the plant is located," noted economist Ed Lotterman. "Little of this will ever come back to the US."

Lotterman told DW that even if manufacturers could be convinced to move their plants back to Iowa and Illinois, for example, a rival would most likely win their overseas market share.

Despite forewarning of the dangers of a spiraling deficit as Delaware's senator, Biden plans to enlarge the federal deficit — already at $3.3 trillion (€2.8 trillion), or 16% of GDP — with his huge spending plan worth $5.4 trillion over the next decade.

Biden's strong commitments to tackling climate change, boosting access to health care, addressing the lack of affordable housing and confronting racial inequality have been lauded by US progressives. According to his campaign website, joebiden.com, a huge investment to rebuild America's crumbling infrastructure will help him meet his target for full employment, while education will account for most of the new public spending.

Large tax hikes, mostly on the wealthy, will reverse some of Trump's $1.5 trillion in tax cuts and will offset almost two-thirds of his spending commitments; the rest would benefit from the Federal Reserve's current monetary policy, analysts have said.

"There will be higher budget deficits, but this is much less of an economic issue given that interest rates are near zero and likely to stay there for some time," Zandi told DW.

How will the pandemic impact the global economy?

Corporate America will pressure Biden to undo many of Trump's aggressive trade policies that, as well as tackling China's economic threat, have weakened ties with the United States' strongest allies, including Mexico and the European Union.

But trade experts have said Biden's hands may be tied by his commitment to voters through the Made In America pledge, and that tariffs may remain for some time, despite the huge cost to US importers.

While Trump warned of financial collapse if he failed to win a second term, voters seemed increasingly convinced by Biden's economic plans. Trump's campaign was buoyed by the quick recovery of the financial markets after the pandemic lockdown was eased, but recently there had been signs of new turbulence.

"The jitteriness of the financial markets may be a factor," said Lotterman, whose Real World Economics column appears in several US newspapers. He had predicted that Biden might keep up the pressure for the last week of campaigning through commercials and a social media blitz focusing on the economy.