US President Donald Trump has renewed his threat to cut ties with China, a day after Trade Representative Robert Lighthizer told Congress he did not see decoupling the US and Chinese economies as a viable option. 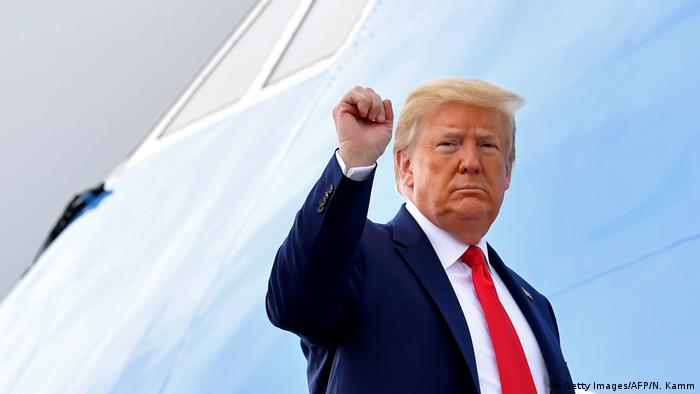 US President Donald Trump on Thursday renewed his threat to end commercial ties with China as tensions between the world's two largest economies intensify over trade.

The US "certainly does maintain a policy option, under various conditions, of a complete decoupling from China," Trump said in a tweet. His remarks came in response to the US Trade Representative Robert Lighthizer's statement before a US House of Representatives committee on Wednesday.

Lighthizer, who has been at the forefront of trade negotiations with Beijing, defended the trade deal with China signed earlier this year. He assured the House Ways and Means Committee that China will fulfill its commitments to buy more US goods and services over the next two years. "I think we have what is an excellent agreement," Lighthizer told US lawmakers. "We expect it to be honored."

Lighthizer described himself as a hardliner on China policy, and outlined the Trump administration's plans to "reset" the World Trade Organization, largely so that it can better rein in Beijing's policies which he says run afoul of free trade rules.

But he also told the committee that decoupling the economies of the US and China was now impossible. "That was a policy option years ago, but I don't think it's a policy or reasonable policy option at this point," Lighthizer said.

The statement caused some angst in Republican circles.

Trump tried to let his trade official off the hook by tweeting: "It was not Ambassador Lighthizer's fault (yesterday in Committee) in that perhaps I didn't make myself clear."

Trump in January signed the "phase one" of a trade deal aimed at ending a trade war in which he has slapped tariffs on billions of dollars of Chinese products.

Secretary of State Mike Pompeo said that a senior Chinese official also confirmed to him Beijing's commitment to phase one, which includes China stepping up purchases of US products.

Besides trade, the US and China have been at loggerheads over the handling of the coronavirus pandemic and Beijing's move to impose security legislation on Hong Kong, among multiple points of friction that have worsened this year.

Trump last month signaled a further deterioration in the relationship, saying he had no interest in speaking to President Xi Jinping right now and suggesting he could even cut ties with the world's second-largest economy.

If Hong Kong's special trade privileges under US law were revoked, it would erode the city's competitiveness as an export hub and an international financial center, say experts. (29.05.2020)

The US president has said he does not want to speak to his Chinese counterpart Xi Jinping and threatened to sever ties with Beijing, as the standoff between the two countries continues. (15.05.2020)