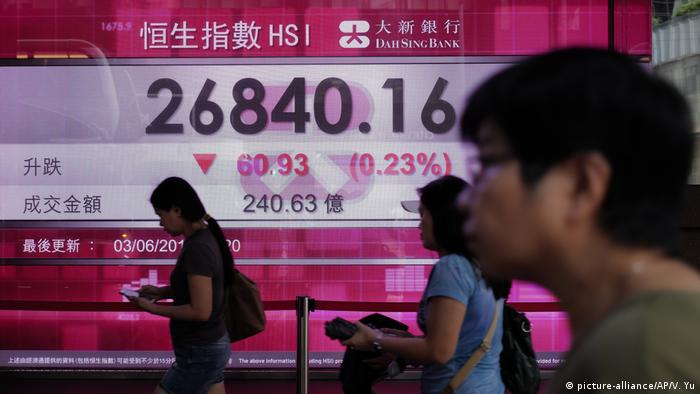 Hong Kong is one of the world's leading financial centers, but its future as a major hub seems to face a growing array of threats as the city turns into a flashpoint in the increasingly rancorous geopolitical and economic struggle for supremacy between the US and China.

Critics say Beijing's move is aimed at ending Hong Kong's freedoms enjoyed under a "one country, two systems" formula adopted when it returned to Chinese rule in 1997.

On Wednesday, the US State Department declared that Hong Kong was no longer sufficiently autonomous from mainland China. "No reasonable person can assert today that Hong Kong maintains a high degree of autonomy from China, given facts on the ground," US Secretary of State Mike Pompeo said.

The announcement sets the stage for a possible withdrawal of the preferential trade and financial status the US accords the former British colony.

Following the declaration, it is now up to President Donald Trump to decide the next steps. The US president could take a variety of punishing measures, including imposing tariffs, limiting visas and other economic penalties.

Trump is due to make an announcement later in the day and has vowed a tough US response to China's move.

Observers worry that Washington will likely revoke a range of trade and other economic benefits Hong Kong currently enjoys with the US, including the city's recognition as a unique customs territory separate from mainland China.

The favorable tariff treatment is accorded under the 1992 US-Hong Kong Policy Act. "It seems likely for the US to revoke the act as it only requires an executive order from the White House," Alicia Garcia-Herrero, chief economist for Asia-Pacific at Natixis, an investment bank, and a senior research fellow at Bruegel, told DW.

Depending on the range of measures the US government decides to take, experts say, Hong Kong could see a hit to its competitiveness as an export hub and international financial center, as well as its role as a regional headquartering hub for multinationals.

Read more: Many Hong Kong residents leave, if they can

The US move comes at a time when the Hong Kong economy is already struggling, with the coronavirus pandemic dealing a heavy blow to business activity in the city.

In the first quarter of 2020, Hong Kong's economy shrank as much as 8.9%, after it entered a technical recession in 2019 as a result of the US-China trade dispute and months of anti-government protests.

"The Hong Kong SAR economy is already forecast to contract by 6.6% in 2020 due to the impact of the pandemic on key sectors such as tourism, exports and retail trade," Rajiv Biswas, APAC chief economist at IHS Markit, told DW. "US decertification of Hong Kong SAR's special economic status could pose a further potential negative shock to the Hong Kong economic outlook."

But Hong Kong's government warned that removing the territory's special status could also hurt the US economy. "Any sanctions are a double-edged sword that will not only harm the interests of Hong Kong but also significantly those of the US," Reuters quoted Hong Kong's pro-Beijing government as saying late on Thursday.

A US decision to revoke Hong Kong's special trade privileges wouldn't have a direct impact on the city's international status, however. The territory would continue to be treated as an independent customs territory by the World Trade Organization and as a separate entity by other multilateral institutions like the World Bank and the International Monetary Fund.

Hong Kong owes its status as a flourishing financial hub to a number of factors, like the region's rule of law, independent judiciary, relatively low taxes and lack of capital controls as well as huge concentration of financial and legal service providers, among other things.

The city's access to mainland China and proximity to other countries in the region has also worked in its favor. Despite the growing significance of places like Shanghai and Shenzhen as China's financial centers, Hong Kong remains a key gateway connecting mainland China with global financial markets.

China also uses Hong Kong's financial markets to attract foreign funds. "Chinese companies are by far the most important USD issuers in the Hong Kong offshore market, so most of Hong Kong's external debt is actually debt from Chinese subsidiaries operating from Hong Kong," said Garcia-Herrero. "Having access to USD financing is key for China to continue to buy foreign companies without hard currency financing constraints," she added.

Hit to the city's status

Against this backdrop, withdrawal of US special trade privileges to Hong Kong could jeopardize the city's role as an international business and financial hub, worry experts.

"If Hong Kong's special treatment under US law were revoked, the city would lose access to sensitive US technology and face an increased threat of US tariffs," Mark Williams, chief Asia economist at Capital Economics, wrote in a research note.

"The short-term economic damage would be manageable, but it would accelerate the erosion of Hong Kong's status as an international business center."

The loss of Hong Kong's trade privileges could also mean Hong Kong identity card holders might lose their ability to visit the United States without applying for a visa in advance.

"For multinationals concerned about the impact on their Hong Kong operations, the devil will be in the detail of both the planned new national security law legislation as well as what measures the US may decide to take," said economist Biswas.

Security chiefs in Hong Kong have given their backing to a bill that pro-democracy activists say will end the territory's "one county, two systems" model. Activists are planning more protests, despite coronavirus. (25.05.2020)