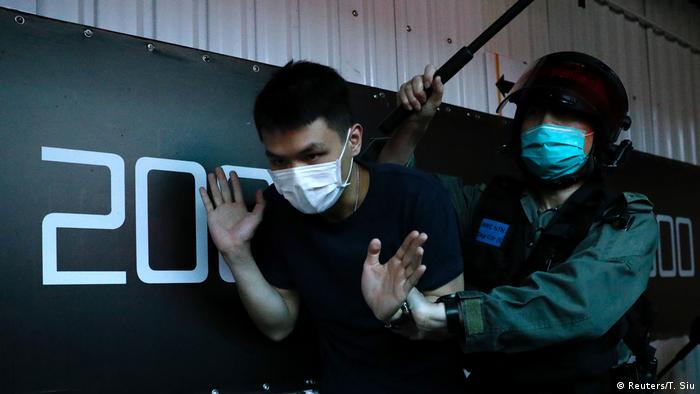 China's National People's Congress is set to pass its proposed new "security law" this week, bypassing Hong Kong lawmakers and, as widely feared by the international community, effectively putting an end to the territory's autonomy.

The law would outlaw statements in favor of democracy, liberty and human rights, branding them acts of subversion or sedition that undermine China's national integrity.

Once again, China's autocrat Xi Jinping and his party leaders are violating Hong Kong's Basic Law, the mini-constitution, which was put in place when the territory was handed back to China from the UK in 1997.

China does not respect the rule of law

Two million Hong Kongers took to the streets in peaceful protests against the planned amendment. After months of mass demonstrations, Carrie Lam — installed by Beijing as the territory's chief executive —finally caved in October 2019 and shelved the amendment. She paid a price for her reluctance to act, with Hong Kong's pro-democracy camp winning by a landslide in the November local elections, taking 17 of the territory's 18 district councils.

Beijing was furious, and with Hong Kong's legislative elections scheduled for next September, pro-Beijing lawmakers will most likely lose their seats as well. Hence the reason for the new bill, which will allow Beijing to entirely circumvent Hong Kong's parliament and give the authorities the power to arbitrarily arrest anyone it deems a "terrorist" — democratic leaders among them.

Beijing has already been flexing its muscles in an attempt to weaken the pro-democracy camp. In early April, leading Hong Kong pro-democracy activists were arrested to set a precedent. Anyone convicted by a court is prohibited from running for public office.

Unfortunately, Hong Kong is lost. But China must now be made to feel serious consequences for its actions. Otherwise, emboldened by its success, it will attempt to annex Taiwan. Taiwan is an independent country offshore the Chinese mainland and arose of out the Chinese Civil War, which ended in 1949. China's ruling Communist Party is hell-bent on crushing Taiwan's successful democracy, fearing it could inspire a pro-democracy movement at home.

The democratic international community must therefore impose sanctions on autocratic China, forcing it to stick to its promises. Germany should side with the United States and the United Kingdom, which have already made steps in this direction. Diplomatic ties with Taiwan must be strengthened, and assurances of military aid must be provided in case of a Chinese attack.

Saint Augustine, the principal advocate of just war theory, said it is justifiable to come to the aid of a nation that is being invaded for no reason. Chinese President Xi Jinping has repeatedly threatened Taiwan with war and annexation. Now is the time to send a clear message: such behavior would be unacceptable and would see China excluded from the international community.

We must help Hong Kongers — the young and highly educated in particular, who have been labeled as "terrorists" by China for partaking in pro-democracy rallies — by allowing them to start a new life in the free world. We must, in other words, make it crystal clear to China that we are serious. We must take action, instead of turning a blind eye out of fear of economic repercussions.

A previous version of this article included a inaccurate statement due to translation from the original German text. This has now been clarified. The department apologizes for the error.

Opinion: Germany's mandatory testing for travelers is only sensible 2h ago