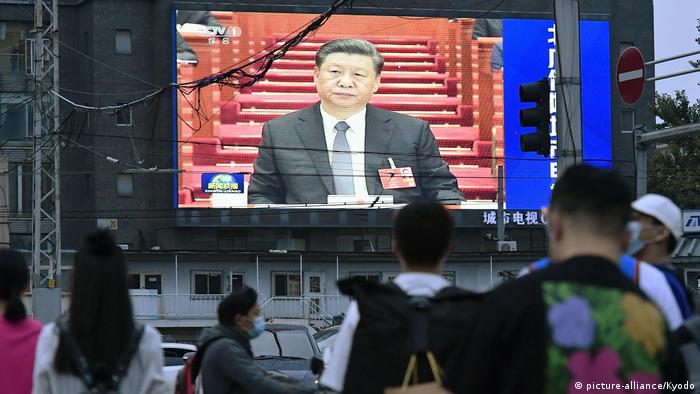 As 2,897 representatives from across China gathered in the Great Hall of the People for the annual Chinese National People's Congress on Friday, the first point of order was not the seemingly all-consuming topic of the coronavirus pandemic. Instead, it was a domestic policy issue to address "national security risks in Hong Kong" — an unprecedented move for China's pretend parliament , one that clearly showed the world that Beijing has no intention of loosening its grip on Hong Kong.

Hong Kong's Basic Law, a type of constitution, grants the city the right to autonomy for at least 50 years under the "one country, two systems" model, put into place when the former British colony was returned to China in July 1997. The Basic Law envisions an autonomous Hong Kong with independent, Western-style democracy based on the rule of law. But the document itself has weaknesses: for example, it doesn't set any specific deadlines for the introduction of direct elections for city administrators or parliamentarians.

Article 23 of the document deals with the issue of national security, and it, too, has problems. The controversial legislation requires Hong Kong administrators to use local laws to arrest and prosecute individuals for "any act of treason, secession, sedition, subversion against the Central People's Government." Ties with foreign political organizations and bodies are also prohibited.

The legislation was initially tabled in 2003 but it has never been implemented, with each new revision accompanied by public outcry. Hong Kong residents fear Beijing is undermining the "one country, two systems" promise. They are deeply suspicious of the Chinese Communist Party, and feel leaders in Beijing are intent on blocking direct elections. That is exactly why democracy advocates have singled out Article 23 as a rallying cry for their demands for more democracy, more civil rights and less influence from Beijing.

But this latest message from Beijing could not be clearer: China's central government is losing its patience. The Communist Party is flexing its muscle and is intent on forcing Hong Kong's 7.5 million residents to accept Beijing's national security law. Beijing has the legal right to introduce such measures on Hong Kong's behalf through the use of Appendix III of the Basic Law, with the People's Congress maintaining the ultimate decision-making authority over the laws.

The "one country, two systems" principle, a balancing act between two fundamentally different forms of government and two entirely different views of the world, is a farce. There is no true balance in the compromise, and Beijing clearly has far more leverage than those in favor of democracy. Friday's announcement unmistakably illustrates what a powerful authoritarian system is capable of: Beijing can and will continue to interfere with Hong Kong's basic democratic order, establishing a new communist order in its place while quietly snuffing out critics' voices.

Beijing also intends to set up offices for its security agencies in Hong Kong in the near future. That shows Beijing has learned from the chaos and anarchy that quickly spread across the city in 2019 as a reaction to the introduction of an unpopular extradition law. This time, Beijing is making its intentions clear: Should Hong Kong, stuck in a political stalemate, fail to pass the laws backed by leaders in Beijing, then the People's Congress will use its absolute power to pass national laws that apply solely to Hong Kong.

"No" votes to the proposed law are not to be expected. True, Hong Kong did send 36 representatives to the National People's Congress, but most are wealthy businessmen operating with the blessing of Communist Party leaders. Meanwhile, Hong Kong's opposition leaders won't be represented in the Great People's Hall, where pseudo parliamentarians view them as "separatists" and "agitators," and clearly not as true Chinese.