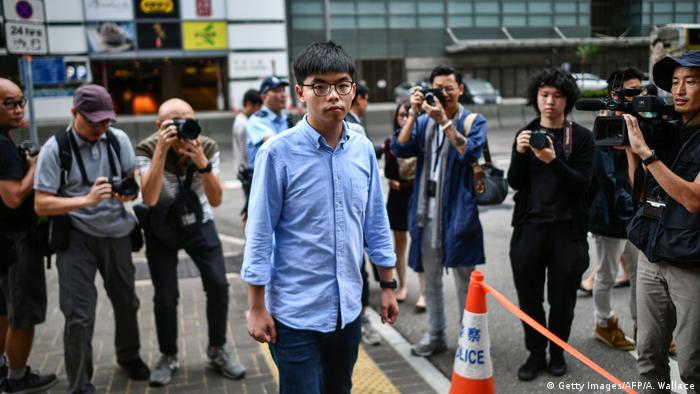 Joshua Wong stands before media after a press conference

Wong said: "There's no doubt at all, they will continue a crackdown on Hong Kong people who fight for democracy and freedom (…) The national security law is not only suitable for Hong Kong citizens. Even travelers or foreigners in Hong Kong, they are also allowed to be arrested with such an evil law."

Wong expressed concern on the implication of the law regarding extraditions to mainland China: "Once the National People's Congress [passes the law], then Hong Kong police or a secret agent can use this to arrest people or prosecute people or even extradite Hong Kongers from Hong Kong to China."

"Last year, we opposed the extradition law that was really for controversial, and we saw in two minutes people took to the streets," the activist said. "But later on in 2020, Beijing didn't plan to impose the extradition law. They just planned to announce it in Beijing instead of going through the legislative process in Hong Kong."

On the readiness of Hong Kong to fully cooperate with Beijing on this law, Wong said that Hong Kong leader Carrie Lam and government officials were "puppets of Beijing" or "loyalists of communist approaches." He added that they had "eroded the universal values that we all believe in. (...) Hong Kongers must take to the street again in June."

Wong called for international support against the national security law: "Supporting Hong Kong is not a matter of left and right. It's just a matter of right or wrong (…) We really wish that the U.S. or any European country could impose the Hong Kong Human Rights and Democracy Act or the Global Magnitsky Act to enhance the sanction mechanism, and let Beijing realize that kowtowing to China is not the only way out."