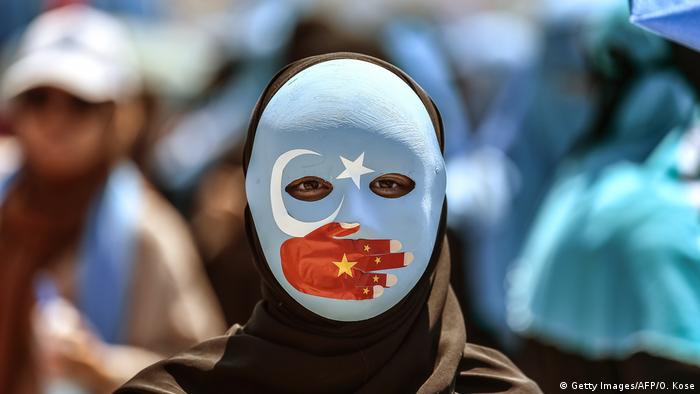 A demonstrator attends a protest to denounce the treatment of ethnic Uyghur Muslims.

Over the last two and a half years, Gulzire Taschmemet has launched countless campaigns on the streets of Munich and conducted several media interviews to free her sister from one of the many re-education camps in China's Xinjiang Autonomous Region.

Her sister, Gulgine Taschmemet, was a graduate student at the University of Technology in southern Malaysia's Johor state. Having lost contact with her family while in Malaysia, Gulgine returned to her hometown Ghulja City in Xinjiang on December 26, 2017, to check on her parents and younger brother. At that time, Gulgine had already accepted a scholarship to continue her doctoral study at her university in Malaysia. 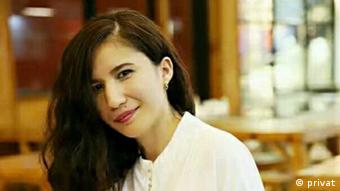 Gulgine deleted Gulzire from her WeChat to avoid attracting the attention of local authorities for contacting family members abroad. She agreed to keep Gulzire updated about her safety by changing the profile picture on her WeChat account once a week. However, after she got home, she changed the profile picture to her mother's picture and never updated her account again. Gulzire realized that their mother had also removed her from WeChat in January 2018. She was later informed by a friend in Xinjiang that Gulgine had been sent to a re-education camp. Soon after, said friend also removed Gulzire from WeChat.

Experts assume that since 2017 over a million Uyghurs have been detained in re-education camps across Xinjiang, most of them accused of upholding "strong religious views" or "politically incorrect views."

After losing contact with her family, Gulzire began to advocate in Germany, hoping to attract international attention that could pressure China to release her sister. She also asked German journalists in China to visit her family home in Xinjiang. "The journalists didn't see my sister when they visited my family in Xinjiang," said Gulzire. "I decided to talk about my sister's disappearance in a documentary produced by PBS. The documentary aired in Norway and the UK in 2019, but the Chinese government didn't respond."

After the documentary aired in the U.S. this April, Gulzire received an unexpected phone call. "I got a call from an unknown number on May 1," said Gulzire. "I didn't hear any sound when I picked up for the first time, so I hung up. Then I received another call, and this time, I heard Gulgine speaking on the other side of the telephone. I was really surprised. I asked if it was her, and she said 'yes, sister, it is me.'"

Gulgine asked Gulzire to connect via WeChat. Gulzire found the WeChat account but realized that it was an unfamiliar account that belonged to neither her sister nor her mother. However, she still added the account to remain in contact. Moments later, her sister called her and the family had their first video call in more than two and a half years. 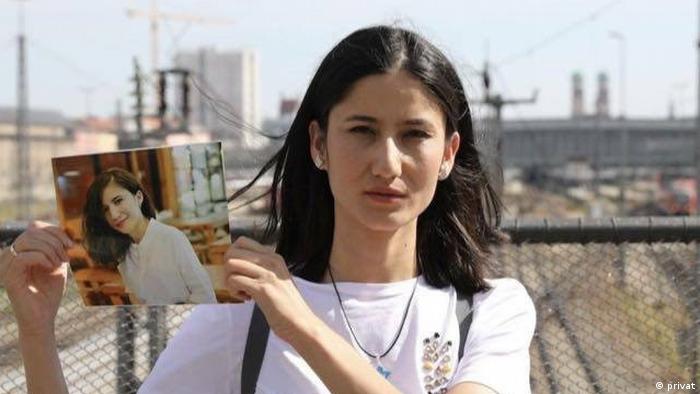 "We talked for about six minutes, and my mom and my sister were both very excited the entire time," Gulzire said. Since her family had mentioned that someone from the local neighborhood was with them, Gulzire only asked simple questions. "I was afraid of getting them into trouble if I asked them anything too sensitive," Gulzire said.

Before ending the call, they asked her not to tell anyone about the call. "My sister kept saying 'Gulzire, promise you will not tell anyone about our call, and please keep it a secret,'" said Gulzire. "My mom also told me not to join any protest in the future. I realized someone must be monitoring them, so that's why their attitude went from very excited to very serious all of a sudden."

'They are still not free'

Even though Gulzire was able to reconnect with her family after two and a half years, she still has mixed feelings about the changes that she saw in her sister. "Gulgine originally wanted to continue her doctoral studies in Malaysia, and establish her own computer training center back in Xinjiang," Gulzire told DW. "However, now she is an English teacher teaching at a training center. I don't think this is her own choice. She must have been forced by the government to make such a decision." She is convinced her that her sister is still not truly free from the government's surveillance. A mosque in Xinjiang province fitted with a surveillance camera

"I am afraid that my video call with my family would be used by Beijing as a bargain to silence me, and I'm also concerned that anything sensitive I said in public could cause my family to be sent back into the re-education camps," Gulzire told DW. "However, later I realized that I have so many other relatives and friends who are probably still detained in one of the many camps in Xinjiang, so I decided to keep speaking up for the Uyghurs."

Peter Irwin, Senior Program Officer for Advocacy and Communications at Uyghur Human Rights Project, told DW that over the last few years, the Chinese government has been asking Uyghurs in Xinjiang to call their family members abroad and tell them to go back to China. Additionally, certain overseas Uyghurs' prominence made them the target of Beijing's smear campaign, as they want to use family members of these overseas Uyghurs to discredit them.

"This is basically hostage diplomacy, and it's not just directed at a particular individual. They are sending a message that says 'look, we might release these people, but you need to stop speaking up,'" said Irwin.

Apart from her sister, Gulzire's mother- and sister-in-law have both been sentenced to 19 years in jail for traveling to Turkey and contacting overseas relatives. "Whether I decide to speak up for the Uyghurs or not, when the Chinese government wants to imprison any Uyghurs, they will still do so," Gulzire explained to DW. "This is why I never trust Beijing, and I won't believe that after that phone call with my sister and other family members on May 1, they will truly be free."

Former CCTV reporter Li Zehua uploaded a YouTube video nearly two months after his disappearance from Wuhan stating he is now safely back home. However, netizens have raised questions about the content of his video. (24.04.2020)

China's Uighur - what you need to know.