HK leader Carrie Lam says that Beijing's proposed legislation will not affect the city's judicial independence. Critics warn it could further erode the basic and fundamental freedom of the autonomous Chinese territory. 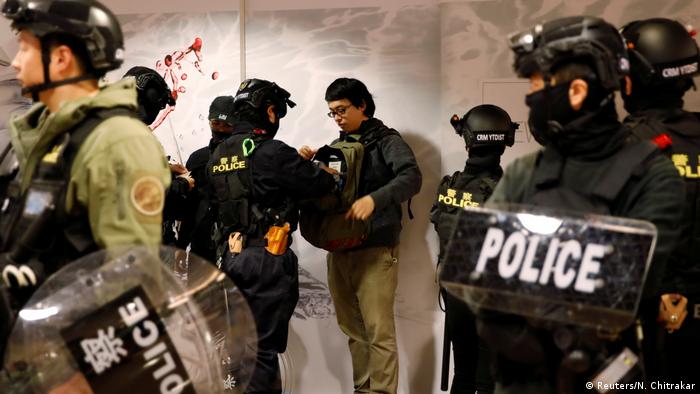 Hong Kong activists and opposition lawmakers criticized Beijing's proposal to enact new national security legislation in the semi-autonomous Chinese territory, warning it goes against the "one country, two systems" framework that allows the city to enjoy freedoms not found on the mainland.

China submitted the proposal during the opening day of the National People's Congress (NPC) on Friday. Premier Li Keqiang said that Beijing would "establish and improve the legal systems and mechanisms to safeguard national security" in Hong Kong.

The proposed legislation, which is expected to ban treason, subversion and sedition, has faced significant backlash in Hong Kong and from the US and Taiwan. In reaction, the Hong Kong stock market closed down more than 5%.

In an interview with DW News hours later, prominent democracy activist Joshua Wong said Beijing had "totally violated procedural justice." He warned that if the legislation is passed in the territory, "Hong Kong police or secret agents can use this to arrest people or prosecute people or even extradite Hong Kongers from Hong Kong to China."

According to Wong, non-Hong Kong citizens including travelers and foreigners could also face arrest and extradition under the new law. He called on all "allies from around the world to support Hong people against the national security law that erodes our basic and fundamental freedom."

Beijing tried to introduce a similar law in 2003 but shelved the initiative due to mass protests.

In a statement, she announced that the Hong Kong government will "complete the legislation as soon as possible to discharge its responsibility of safeguarding national security." According to Lam, the proposed legislation would not affect Hong Kong's judicial independence or that of its legal entities, adding that Beijing's intention was to tackle illegal activities that the government believed had damaged national security.

Former pro-democracy lawmaker Lee Cheuk-yan warned against "the end of Hong Kong," saying that Chinese leader Xi Jinping "has torn away the whole pretense of 'one country, two systems.'"

US and the EU express concern

US Secretary of State Mike Pompeo said the move by Beijing was a "disastrous" one for democracy, while also talking up the negative implications it could have on economic relations.

"The United States strongly urges Beijing to reconsider its disastrous proposal, abide by its international obligations, and respect Hong Kong’s high degree of autonomy, democratic institutions, and civil liberties, which are key to preserving its special status under US law."

How 'legal' is the proposal

DW correspondent Phoebe Kong tweeted that the security law was "listed under annex 3 of basic law, bypassing scrutiny of the local legislature."

For pro-democracy lawmaker Tanya Chan, the proposal goes against the Basic Law. "It is a complete dishonor of promises made under the Sino-British Joint Declaration, as well as all the promises made by the Chinese government to us and the world," she said, referring to the deal that saw Hong Kong returned to China in 1997 from colonial power Britain.

Steve Tsang, director of the China Institute at the School of Oriental and African Studies in London, explained that while the enactment of such legislation is required under Article 23 of the Basic Law, Beijing has decided not to try to force it through the Hong Kong legislature.

Instead, it has chosen what he called a "worse option'' by proposing the NPC enact a national security law for the city.

"For many in Hong Kong, the NPC enacting for Hong Kong will be tantamount to the effective end of the 'one country, two systems' model,'' Tsang said. "I find it hard to believe this will not trigger either a massive peaceful and orderly demonstration or more vocal and aggressive protests…"

Hong Kong activists called on Friday for people to rise up against Beijing's proposal of the security legislation.

"This is the largest nuclear weapon the Chinese Communist Party has used in its mutual destruction of Hong Kong," said  Jimmy Sham, leader of the Civil Human Rights Front, which organized the million-person rally that kicked off last year's mass protests.

Sham appealed for millions to again take to the streets, while other activists used internet threads and chat apps to call for protests on Sunday.

A proposed march at noon in the center of the city did not materialize after only a handful of protesters turned up with riot police marking their presence on the streets. Protests were largely subdued in recent months because of coronavirus restrictions.

Activist Wong said he has "no doubts at all" Beijing "will continue to crack down on Hong Kong people who fight for democracy and freedom" and vowed protesters will take to the streets until their voices are heard.

A return of violent protests would push the city's already weakened economy into a downward spiral, prompting multinational companies to reconsider their presence in Asia's financial hub and Washington to review its policy of granting the territory more advantageous trade conditions than mainland China, Tsang warned.