Police say they have arrested 230 people, some as young as 12, after a weekend of pro-democracy demonstrations. Activists are concerned that pandemic lockdown measures will be used by China to roll back more rights. Some 230 people were arrested in protests over the weekend in Hong Kong, local authorities said on Monday. Pro-democracy demonstrations have picked back up in the city after weeks of under a coronavirus-related lockdown.

Police said the detainees were between the ages of 12 and 65, and the charges ranged from assaulting an officer to failure to provide proof of identity. Democratic lawmaker Roy Kwong was amongst those arrested, officers said he was being charged with disorderly conduct. Video showed him being surrounded by police and pushed to the ground.

On Sunday, protestors had gathered for a sing-along event at a shopping mall when hundreds of riot police were called in to disperse the crowd. According to police, they also blocked roads in the city's Mongkok district and started fires.

Onlookers and journalists also got caught up in the ensuing clashes, with police firing tear gas at reporters and activists alike. 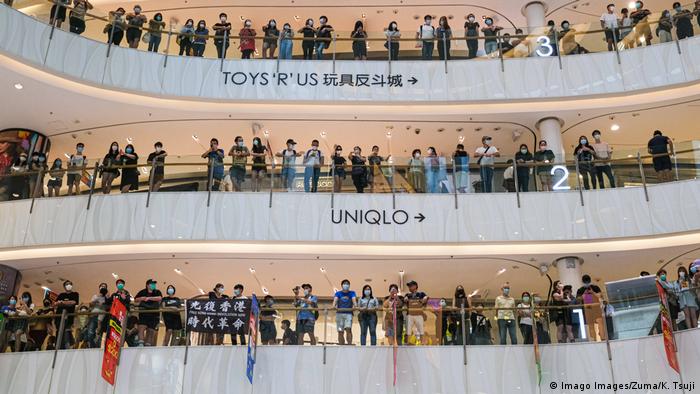 "Some journalists who were sprayed by pepper spray were not allowed to receive immediate treatment, and they were requested to stop filming," said Chris Yeung, chairman of the Hong Kong Journalists' Association.

Footage of the scuffles, which included some people lying on the ground bleeding, were reminiscent of when Hong Kong was brought to a standstill by months of protests last year. At least 18 people had to be brought to local hospitals, the city's Hospital Authority said, including Kwong.

There have been widespread worries amongst democracy advocates in Hong Kong that restrictions put in place to slow the spread of the pandemic will be used by China to further clamp down on rights. For example, a contact-tracing app meant to control who comes into contact with infected people may be used to target anti-Beijing protestors, activists have warned.

Current restrictions only allow public gatherings of a maximum of eight people.

Despite fears across Asia about a possible second wave of the virus, organizers are still planning to hold an annual mass pro-democracy rally on July 1. They say they are expecting two million people to join the even that marks the anniversary of Hong Kong was handed over from British to Chinese rule.

Ahead of World Press Freedom Day, Germany's foreign minister said independent journalism is being weakened during the coronavirus pandemic. The EU also warned that media freedom is under threat in several countries. (02.05.2020)