While thousands of Chinese lawmakers gather for their annual session, Beijing is preparing a new law against subversive activities in Hong Kong. Opposition democrats in the city warn it would be "the end of Hong Kong." 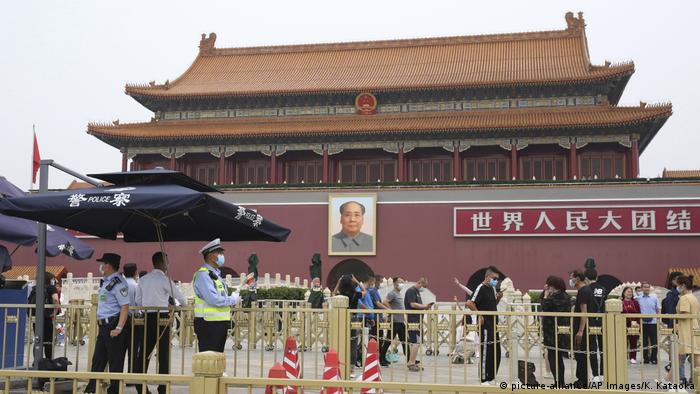 Beijing is set to present a new law on Hong Kong in the National People's Congress, China's largely ceremonial parliament, on Friday, The bill is "entirely necessary" due to "new situation and demands" to establish new legal and enforcement mechanism to protect national security, said spokesman for the lawmaking body Zhang Yesui.

Sources cited by the South China Morning Post said the law would target subversive and pro-secession activities, as well as foreign interference and terrorism in the semi-autonomous city. 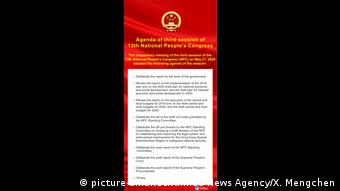 Although the details are not, legislation on Hong Kong is mentioned in the agenda for the congress

The move has already boosted tensions between Hong Kong and the central government, with calls for protests popping up online on Thursday. Hong Kong, a former British colony, was returned to China in 1997 under the so-called "one country, two systems" principle. This allowed it to maintain a large degree of economic and political autonomy.

Hong Kong lawmaker Dennis Kwok warned that the law would mean that the principle was "officially erased."

"This is the end of Hong Kong,"  Kwok said on Thursday.

Protest movement slowed down by pandemic

Beijing has already tried to introduce a similar law in 2003, but shelved the initiative due to mass protests. In the intervening years, residents of Hong Kong repeatedly rebelled against what they see as Beijing's attempts to hollow out the city's autonomy. A wave of partially violent protests shook the city last year over an initiative that would allow extradition to the mainland. Despite the local authorities withdrawing the bill in September, the protesters continued to rally and demand more autonomy from China in 2020. Many of the larger events, however, were canceled due to the coronavirus pandemic.

The session of the National People's Congress, which gathers some 3,000 delegates every year, has also been postponed amid the crisis.

Read more:  Coronavirus: Why is Donald Trump so critical of the WHO and China?

Chinese 'countermeasures' on US sanctions

"Any effort to impose national security legislation that does not reflect the will of the people of Hong Kong would be highly destabilizing, and would be met with strong condemnation from the United States and the international community," State Department spokeswoman Morgan Ortagus said.

Meanwhile, US Senators pledged to introduce a bipartisan bill aiming to impose "serious penalties on those working to strip Hong Kong of its autonomy," as Democrat Chris van Hollen put it.

Earlier this month, US State Secretary Mike Pompeo said he was delaying a report on Hong Kong while awaiting developments from the National People's Congress. The report is assessing the degree of Hong Kong's autonomy.

The US Senate also recently passed a law sanctioning Chinese officials over the persecution of the country's Uighur minority, and several US Congress members called for sanctions over the coronavirus response.

Chinese spokesman Zhang Yesui warned against the move on Thursday.

"We firmly oppose these bills, and will make a firm response and take countermeasures," he told a news conference.

More than 1 million people marched through Hong Kong as protest leaders pledged to keep fighting for their demands in the new year. Police and demonstrators previously clashed during midnight celebrations. (01.01.2020)