Coronavirus: Why is Donald Trump so critical of the WHO and China? 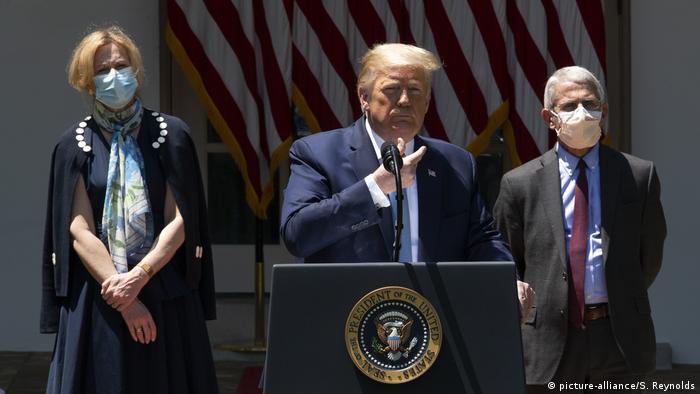 What exactly did President Trump say?

In classic Trump style, it's really more about what he tweeted. Late Monday, the president shared a copy of a scathing four-page letter he sent to the World Health Organization (WHO) and its director-general, calling it "self-explanatory!"

To be fair, Trump's argument is extremely blunt: he wrote that the WHO had shown an "an alarming lack of independence'' from China in its COVID-19 response, and that the US will leave if there aren't "substantive improvements" in the next 30 days.

What else is in the letter?

It's essentially a timeline written out in bullet points, listing all the occasions Trump feels the WHO failed to criticize China over its response to the pandemic. The list starts with December, when Trump claims the WHO "consistently ignored credible reports of the virus spreading in Wuhan."

It goes on listing events until mid-April, attacking the WHO for making "claims about the coronavirus that were either grossly inaccurate or misleading" and for bowing to pressure from Beijing to downplay the pandemic.

Trump also takes a big swipe at Director-General Tedros Adhanom Ghebreyesus, comparing him unfavorably with the WHO's leader during the 2003 SARS outbreak, Gro Harlem Brundtland, and accusing Tedros of "political gamesmanship."

He ends with a threat to permanently stop US funding for the WHO and possibly pull out altogether if the organization does not implement immediate reforms. "I cannot allow American taxpayer dollars to continue to finance an organization that, in its present state, is so clearly not serving America's interests," Trump wrote.

Read more: WHO: 'Independent evaluation' of pandemic response will follow

Why would Trump write such a critical message?

Probably because he believes it. Trump has repeatedly targeted international organizations throughout his presidency, saying they are biased against the US.

But Trump is also, in part, behaving strategically and making certain political calculations.

"China and the US are currently finding it convenient to fight over the WHO to mask the failure of their own policies," explained Antoine Flahault, director of the Institute of Global Health at the University of Geneva. "China is probably not very proud that the epidemic spread from Wuhan all around the world, and the US is probably not very proud of the failure of its response."

This point has been made previously, including when Trump originally froze US funding to the WHO in April. As of May 19, the US has registered at least 90,000 COVID-19 deaths, making it the worst affected country in the world.

Is there any basis to Trump's complaints?

Few people outside of Beijing would argue with Trump's criticism of China's lack of transparency. Back in November, Chinese authorities stopped doctors from warning their colleagues about the virus and censored news of its seriousness.

"China did not take a transparent approach in dealing with the pandemic at the beginning," Flahault told DW. "The start phase is always a very key phase for controlling a pandemic."

But he argues the WHO was never in a position to be able to demand more information from China. "The WHO is not an enforcement agency. You cannot demand the organization go beyond the power you give to it. It simply follows what the member states agree it can do," he said.

There is also a small point of hypocrisy. In his letter, Trump criticizes the WHO for praising China for its "transparency" on January 28. But just four days earlier, the president himself praised Chinese President Xi Jinping for exactly that.

What happens if Trump makes good on his threat?

The US is the world's largest donor to the WHO — it contributed nearly 15% of its two-year budget for 2018-2019. If Washington were to stop contributing to the agency it would blow a sizeable hole in WHO funds. That's not ideal, to say the least, especially in the middle of a global pandemic. The WHO would have to find alternative funding — fast.

What's been the response from China and the WHO?

As you can imagine, Beijing wasn't too impressed. Zhao Lijian, a spokesperson for the Foreign Ministry, called the letter slanderous and said the US decision to stop WHO contributions was a violation of its international responsibilities.

"The US leadership's open letter is filled with phrases of suggestions, maybes and potentialities, and is trying to mislead the public through this specious method, to achieve the goal of smearing and slandering China's efforts in epidemic prevention and to shift responsibility in its own incompetence in handling the epidemic," Zhao told a press briefing.

On Tuesday, Tedros defended the agency's role in the crisis.

"We want accountability more than anyone," he told a virtual meeting of the WHO's 194 member states. "We will continue providing strategic leadership to coordinate the global response."

So is this a really bad situation?

It's not great, but Flahault thinks there is reason for hope. The World Health Assembly, the decision-making body of the WHO, is currently meeting to decide on the next steps to deal with the pandemic.

In a resolution at the World Health Assembly on Tuesday, member states called for an impartial investigation into the pandemic response and for "universal, timely and equitable access" to health technologies to help fight the pandemic.

"Many of the members, in particular European Union countries, are trying to reinforce this organization, which is greatly needed today," said Flahault.