A long-anticipated report on the police's handling of protests last year has emphasized the violent side of the pro-democracy movement. Hong Kong leader Carrie Lam said her administration "accepted" the findings. 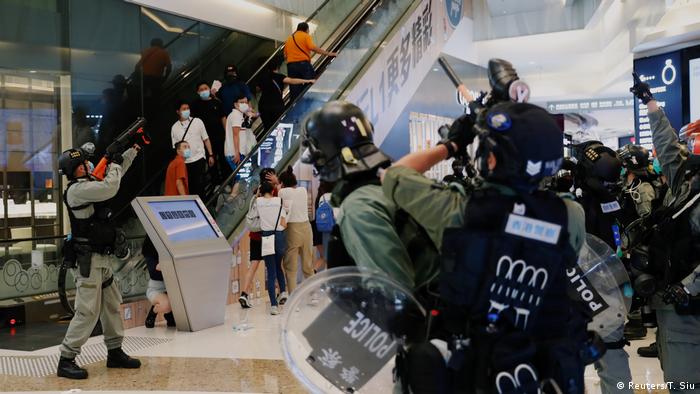 Hong Kong's police watchdog on Friday said allegations of police brutality should not be instrumentalized as a "weapon of political protest," warning the consequences could result in the further deterioration of public security.

"The protests have been driven and continue to be driven by a consistent and continuing message of hatred against the police," said the Independent Police Complaints Council (IPCC) report. "The message suggests that the police had used 'excessive force' in dealing with protesters, amounting to 'police brutality.'"

But the IPCC report noted that police officers who "exceed or may have exceeded the limits of the powers conferred on him by law" were "accountable under the law."

"That is a legal and not a political matter," it added.

The protests were dubbed the most violent in decades.

The IPCC report called on the Hong Kong police force to confront the challenges presented by the anti-government movement, saying failure to do so could herald an "era of terrorism."

"The police force must formulate new strategic directions and equip itself with physical and technological resources, adequate and ready to confront the challenge of multiple city-wide guerilla-type attacks aided by advance technology and accompanied by violence and vandalism verging on terrorism," the IPCC said.

"It will be important for the police force to restore and rebuild public trust."

Hong Kong leader Carrie Lam described the report as "objective" and "fact-based" during a press conference. She said her government accepts all of the report's recommendations and would move forward with them.

"Hong Kong will be beyond redemption," Lam said, if authorities do not act to stop violence committed by protesters.

However, even before the report's release, experts had cast doubt on its neutrality.

"People may have strong convictions ... but they cannot resort to imposing convictions on others," she said. "The government and the police force will definitely say 'No' to that violence."

"We ultimately concluded that a crucial shortfall was evident in the power, capacity and independent investigative capability of IPCC," the experts said in a statement at the time.

The IPCC pushed back, with Chairman Anthony Neoh saying the experts "do not understand Hong Kong's situation." The experts comprised former or serving leaders of law enforcement watchdogs in the UK, Australia and New Zealand, among others.

The region's chief executive says the 'one country, two systems' arrangement could continue if the city shows loyalty to Beijing. Pro-democracy demonstrations in Hong Kong have been ongoing for over six months. (16.01.2020)