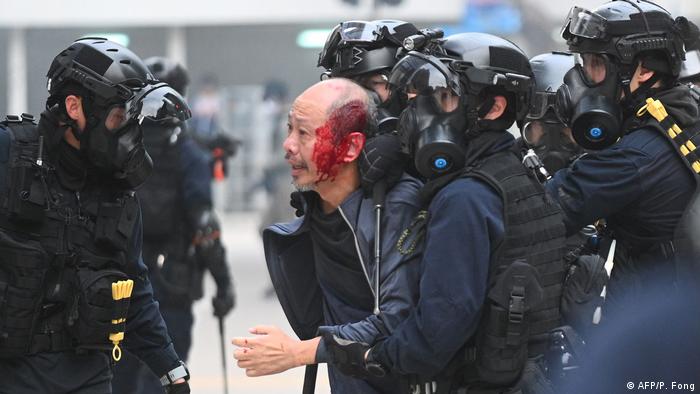 In an apparent new tactic, Hong Kong police showed up near the expected demonstrations in riot gear, with officers carrying out stop-and-search operations.

"Everyone understands that there's a risk of stop-and-search or mass arrests. I appreciate Hong Kong people still come out courageously, despite the risk," said organizer Ventus Lau.

Protest organizers initially applied for a permit for a march, but police agreed only to a static rally, citing earlier marches that turned violent.

With many families and children present, the atmosphere was relatively peaceful before police arrived at the scene to stop it from evolving into an impromptu march.

Some protesters barricaded roads with umbrellas and street furniture while others spray-painted buildings, broke traffic lights or dug out bricks from the pavement.

Multiple arrests were made at the scene. In a statement, police said two community liaison officers were struck with wooden sticks and suffered from head injuries. They also said some demonstrators threw water bottles and paint at police as they conducted their search operations.

One protester was seen with blood streaming from the back of his head, according to French news agency AFP.

"In view of the violent incidents, police officers have asked the organizer to halt the public meeting ... and urge participants to leave the area by public transport," the statement said.

A water cannon truck and an armored jeep were present at the demonstration but not used.

Sunday marked the latest demonstration in a series of protests against Chief Executive Carrie Lam's government since June last year.