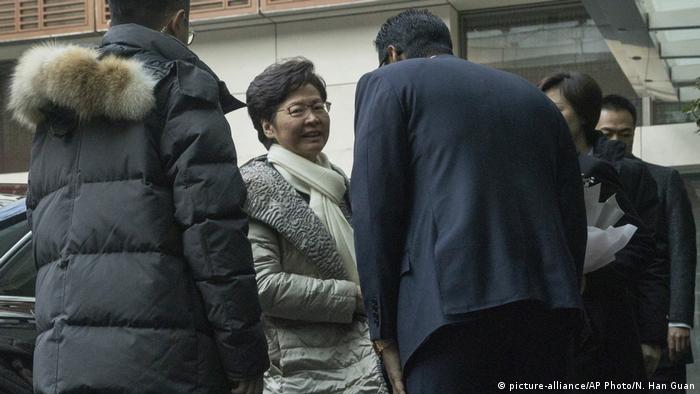 During the chief executive's annual duty visit to Beijing, Lam is set to discuss the political and economic situation of Hong Kong with Chinese government officials and sit down with China's President Xi Jinping on Monday.

Lam's visit comes amid nearly yearlong protests and unrest led by pro-democracy activists, which have left the economy reeling. Scattered protests took place in Hong Kong on Sunday while Lam was away, with scuffles breaking out in various shopping malls. Riot police used pepper spray on protesters after vandalism occurred and detained various individuals.

Lams latest visit has prompted speculation of a change in leadership after Lam's pro-establishment bloc suffered a major upset in local elections that saw a landslide win for pro-democracy parties.

There were further pro-democracy and anti-inequality protests last week during which thousands took to the streets in peaceful demonstrations.

Lam stressed the importance of an open dialogue between the community and officials in a post on social media platform Facebook on Saturday morning.

She said that her governing team would continue to pursue "different formats of dialogue to listen to citizens sincerely" and that "our sincerity to have dialogue with citizens has not changed."

Just this week, Lam said a Cabinet reshuffle was not an "immediate task" after the election defeat and she would focus her efforts on restoring law and order in Hong Kong.

Just before Lam arrived in Beijing, police arrested five teenagers on Friday in connection with the murder of a 70-year-old man during the increasingly heated and violent anti-government protests in November that ended in a siege of Hong Kong Polytechnic University.

The teenagers — three males and two females, aged 15 to 18 — were arrested on Friday on suspicion of murder, rioting and wounding and have been detained, awaiting further investigation, police said in a statement.

Footage of the incident shows rival groups of protesters throwing bricks at each other, during which the man was hit. He later died.

How often does Carrie Lam travel to Beijing?

Lam last met with Xi at the start of November, when he gave her his backing.

Hong Kong's chief executive meets annually with Chinese officials after the territory was handed back to Beijing in 1997 following the end of British colonial rule.

Hong Kong operates under China's "one country, two systems" principle, which allows it a greater degree of freedom to administer its own affairs. A recent cleanup effort by the Chinese military on the streets of Hong Kong after a period of severe unrest between protesters and police sparked speculation of increased Chinese intervention in the special administrative area.

China doesn't need the former Crown colony quite as much as it did back in 1997 when it switched from British rule. But the Special Administrative Region remains a valuable conduit for Beijing. (20.08.2019)