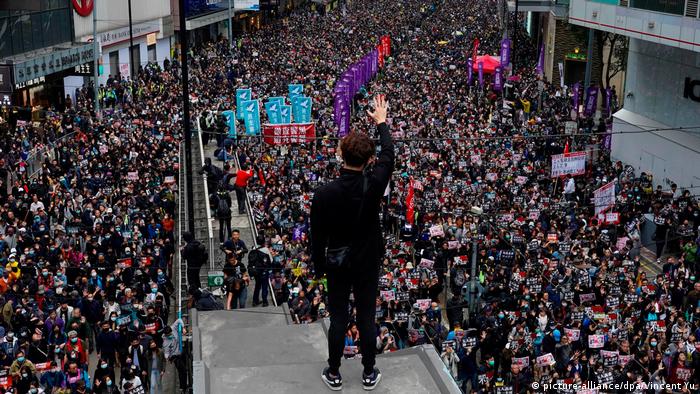 A massive pro-democracy rally took place in Hong Kong on Wednesday, with more than 1 million people joining to keep up the pressure on the government on the first day of 2020, according to rally organizers. Protest organizers claimed the rally was bigger than the original rally that spawned the movement in June last year.

Police in Hong Kong said they arrested "around 400" people on Wednesday.

The arrests were made for offenses including "unlawful assembly and possession of offensive weapons," senior superintendent Jim Ng said.

Police had fired tear gas at protesters in the central business district, and hundreds of protesters formed barricades in the streets, set fires and threw petrol bombs. They were resupplied by human chains, passing supplies to the front lines.

The authorities also said rioters spray-painted an insult about a judge on the wall of Hong Kong's High Court.

However, a government spokesman commended the majority of protesters for acting peacefully. He also pointed out that the protests had an ongoing effect on Hong Kong's economy and that 25 billion Hong Kong dollars (US$ 3.2 billion) was allocated in relief aid to those affected by the protests.

"The HKSAR [Hong Kong Special Administrative Region] government will also continue to humbly listen to members of the public and strengthen community dialogues," he added.

The unrest started in June over an extradition bill which has since been withdrawn.  During nearly seven months of unrest and clashes with the police, however, the protest movement crystalized their demands into five points, including election reforms, amnesty for protest participants, an inquiry into police brutality, retracting the label of "rioters" for the rally participants, and the full formal cancelation of the extradition bill. 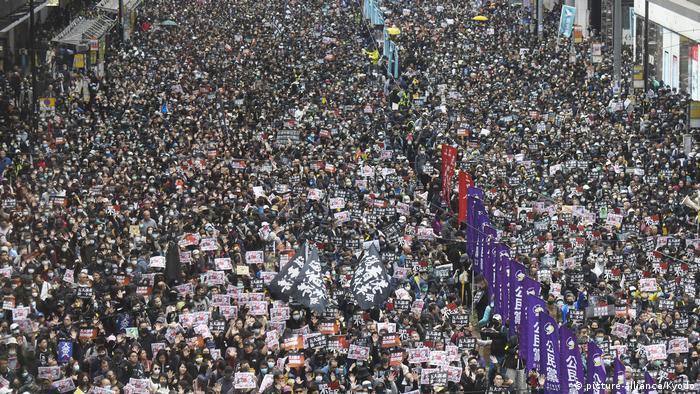 "It's hard to utter 'Happy New Year' because Hong Kong people are not happy," a man named Tung, walking with his 2-year-old son, mother and niece, told the AFP news agency.

"Unless the five demands are achieved, and police are held accountable for their brutality, then we can't have a real happy new year," Tung said.

The protest movement scored an important victory in November, as pro-democracy candidates emerged as winners of a municipal-level vote. Some of the newly elected leaders joined the Wednesday march on their first day in office.

No fireworks in Hong Kong harbor

However, even the celebrations saw anti-government groups set fire to the barricades and police use tear gas and water cannon as crowds of revelers merged with crowds of protesters.

At the city's harbor, protesters turned the end-of-the-year countdown into a pro-democracy chant.

The authorities also made a last-minute decision to cancel the traditional fireworks display at the Victoria Harbour over safety concerns. It was replaced by a light and music display.

While January 1 is celebrated as the official beginning of the new year in China, the country traditionally reserves its biggest celebration for the lunar year, which begins on January 25, 2020.