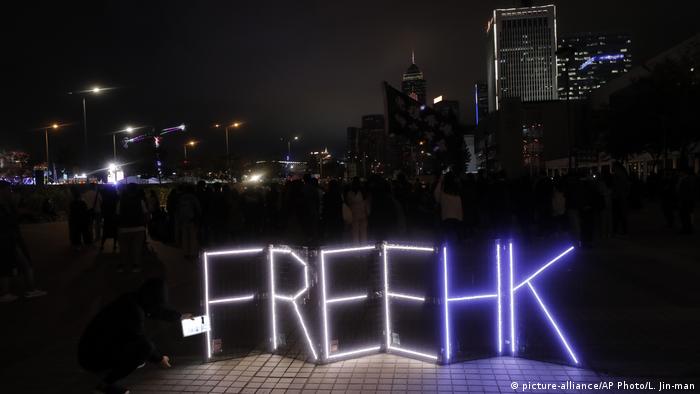 Protesters began staging New Year's Eve rallies around Hong Kong on Tuesday, urging fellow Hong Kongers not to give up fighting for democracy in 2020.

Demonstrators were urged to wear masks at the main rally, dubbed "Don't Forget 2019 — Persist in 2020."  Human chains were expected to be formed across the city, along with "suck the eve" gatherings at major countdown attractions.

What started six months ago as protests against a controversial extradition law has blossomed into a movement fighting for expanded democratic rights and protesting restrictions on freedoms and interference in Hong Kong's affairs by China.

"Without a harmonious and stable environment, how can there be a home where people can live and work happily?" Xi said.

He added that a stable and prosperous Hong Kong was not only good for the city, but was the expectation of mainland China as well.

"Let's start 2020 with a new resolution, to restore order and harmony in society," said Lam. "So we can begin again, together."

The Hong Kong Tourism Board shelved a New Year's Eve midnight fireworks display after months of planning amid "safety concerns." It announced that a 4-million-dollar lotto jackpot ($510,000, €455,000) would be drawn at midnight to keep people interested in the countdown to 2020.

On New Year's Day, tens of thousands are expected to join a huge pro-democracy march, after it received police approval.

A previous march by organizers, the Civil Human Rights Front, in early December, drew about 800,000 people.

As a Special Administrative Region of China, Hong Kong operates under a "one country, two systems" framework, and under a set of laws agreed to with Beijing, Hong Kong's citizens enjoy civil rights denied to people who live on the mainland, such as freedom of assembly and freedom of speech.

China committed to the system as a condition of Britain's handing over the colony in 1997. The Chinese government's erosion of those rights has driven the protest movement.