The ongoing Hong Kong protests are increasing tensions between the special administrative region and the Chinese central government. There's no solution in sight, but what, exactly, is at stake? DW explains. 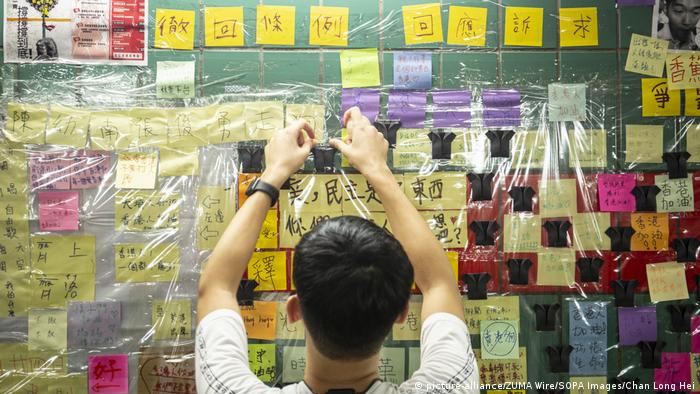 How is Hong Kong different to mainland China?

In almost every sense. Hong Kong uses traditional Chinese characters, while mainland China uses simplified ones. That is why dw.com offers both versions. Hong Kong has two official languages: English and Chinese — or Cantonese to be more exact, which is a dialect that is only spoken and understood in southern China.

Above all, Hong Kong and mainland China have different political and economic systems.

The former British colony has its own currency, the Hong Kong dollar.

People in Hong Kong get to vote — even though most candidates are currently nominated by Beijing. They enjoy freedoms of the press, of opinion and of assembly. Moreover, Hong Kong has a capitalist economy. And unlike mainland China, private property and real estate ownership are protected.

What is the 'one country, two systems' principle?

For over 150 years, Hong Kong was under British control. And in 1898, the "New Territories" were leased to Britain for 99 years. The agreement ended on June 30, 1997 after which it was returned to China.

The Chinese reformist leader Deng Xiaoping coined the notion of "one country, two systems" in the 1980s to facilitate the legal return of Hong Kong.

What is the Hong Kong Basic Law?

After Hong Kong was returned to China in 1997, the Hong Kong Basic Law came into effect. Together with the Chinese constitution, it established the territory's legal framework.

What is the 50-year agreement?

There are different interpretations of what this 50-year period — ending on June 30, 2047 — means. When Chinese President Xi Jinping visited the territory in 2017 to commemorate the 20th anniversary of the return of Hong Kong to Beijing, he said the "principle of 'one country, two systems' will not be changed."

Jasper Tsang Yok-sing, the former president of Hong Kong's parliament, the Legislative Council, believes the 50-year period mentioned in Article 5 applies only to this part of the legal document. And that therefore Hong Kong's Basic Law will remain valid beyond 2047.

But Hong Kong's opposition movement fears that if the island's capitalist system were to be abolished after 2047, the notion of "one country, two systems" could be scrapped, too. In which case Hong Kong would be stripped of its civil liberties and never develop into a proper democracy.

What are the protesters' demands?

The protests started in June when Hong Kong's Beijing-backed chief executive, Carrie Lam, tried to push a controversial extradition bill through the Legislative Council. It would have allowed individuals from Hong Kong accused of having committed crimes in mainland China to be extradited and tried there. After mass opposition, Lam suspended the bill, but many protesters want it scrapped entirely.

As the protests grew in size, the police response grew increasingly brutal, with tear gas and rubber bullets fired at demonstrators. The protesters now also want to see an investigation into the police actions which, in the view of many, deliberately sought to injure demonstrators.

They have also called on Lam to resign, saying she is unfit govern. Above all, the protesters want free and fair general elections in Hong Kong.

While there are some in Hong Kong who call for complete independence from China, the territory's major parties and opposition movement have distanced themselves from such demands. Accordingly, protesters have refrained from publicly demanding Hong Kong split off from China, instead stressing the need to be granted certain liberties.

Why have there been no general elections?

Until now, it has been the practice that Hong Kong's leader gets elected by a pro-Beijing committee and then appointed by China's government — as was the case for Chief Executive Lam.

Since 2004, half of all lawmakers in Hong Kong's 70-seat Legislative Council have been directly elected. The other half were drawn from a so-called functional constituency. Parliament's pro-Beijing faction currently has 43 seats, giving it a slight majority in the legislative body.

While the Hong Kong Basic Law stipulates that the chief executive and all of parliament should be freely elected at some stage, it does not contain a timeframe for doing so. Efforts by Hong Kong protesters to establish universal suffrage have so far been unsuccessful. 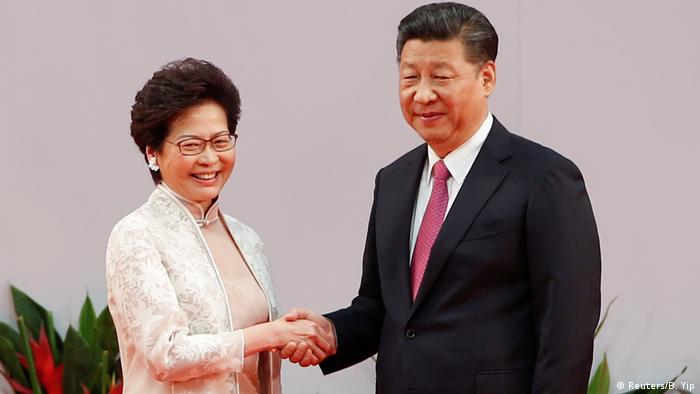 Beijing is in charge of Hong Kong's foreign affairs and defense. Apart from this, Hong Kong has the autonomy to pass its own laws and have its own jurisdiction. This is guaranteed in the Hong Kong Basic Law.

Legally, Beijing would be allowed to do so. But this scenario is considered unlikely.
Article 14 of Hong Kong's Basic Law states that "military forces stationed by the Central People's Government in the Hong Kong Special Administrative Region for defense shall not interfere in the local affairs of the Region."

Yet it also stipulates that Hong Kong "may, when necessary, ask the Central People's Government for assistance from the garrison in the maintenance of public order and in disaster relief."

Despite the ongoing unrest, it is unlikely Chief Executive Lam would ask Beijing to send in troops.

Who has the final say in how to deal with the crisis?

Beijing has the final say. Xi Jinping is not only the Chinese president but also the country's commander-in-chief and thus in charge of troops stationed in Hong Kong. Carrie Lam's direct superior is Chinese Premier Li Keqiang. As such any political – or military – solution to the Hong Kong crisis must be sanctioned by China's leadership.

Why is China accusing the US and Britain of meddling?

Chinese state-controlled media published an image showing a US Consulate worker in Hong Kong meeting with opposition leaders. And other images have surfaced depicting protesters with a US flag. Beijing apparently believes this is sufficient evidence that the US is orchestrating the protests — even though the US Consulate employee also met pro-Beijing politicians.

China's Foreign Ministry similarly accuses Britain of meddling in its domestic affairs by commenting on the Hong Kong crisis. Indeed, in June this year, then-Foreign Secretary Jeremy Hunt openly called on the Hong Kong government to listen to protesters' concerns.

The only viable solution to the current Hong Kong crisis appears to be a political one. But it will have to be acceptable to both the Chinese leadership as well as Hong Kong's political parties.

If such a political solution could be reached, Hong Kong may in fact remain a special administrative region with a considerable degree of autonomy, and possibly even a directly elected chief executive and parliament, after 2047.

But if China and pro-Beijing elements in Hong Kong have their way, the territory's post-2047 status will be entirely unclear.

Hong Kong election: Will the crackdown on rights and freedoms continue? 06.05.2022

Observers say the upcoming vote will be controlled by Beijing and cement the clampdown on dissent. There's only one candidate, and he's seen as tough enforcer of the mainland's ambition to roll back Hong Kong's autonomy.

Experts say Carrie Lam's decision not to seek reelection owes to disapproval of her leadership in Beijing. Mass public protests and COVID have dominated her tenure.